ferguson to malcolm to madison

We took the intersection for twenty minutes, causing a stir. There, standing in the middle of the intersection of Doty Street and Martin Luther King, Jr. Boulevard, several hundred yards from where the regressive Scott Walker only minutes earlier took the oath for his second term as governor of Wisconsin, members of the Young, Gifted and Black Coalition made their public vows as the leaders of a new movement. 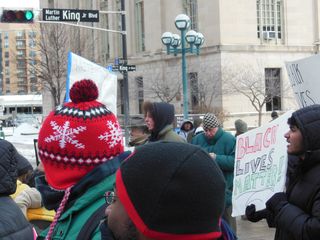 The movement may be new, but some of the words used in this movement are old. Some feel like tributes. YGBC principal Brandi Grayson, a frequent chant and march leader, often finishes off a rousing passage with the full throat call ALL POWER TO THE PEOPLE!!! At the few YGBC rallies I have attended the response often feels fresh and committed. But a couple of times it sounded less than total, including out of my own mouth. I suppose it is in the nature of the call and response to wear down as much as to build to crescendos. In the search for renewed political militancy, this is the paradox we inhabit—caught between hot, fresh emotion and exhausted gestures.

I can hear warm, not hot, enthusiasm in my fellow demonstrators’ voices. This makes sense, seeing as how we are charged with supplying the response in a performance of words that originated in a time meaningful but mythical to many of us—the 1960s—a time that continues to loom large in our common understanding of political possibility. This is not a terrible thing—YGBC rallies have produced many surprises, including on the day of the vows what seemed like a closely held plan to block the intersection. 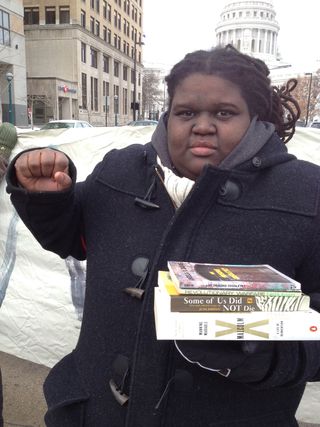 Given the unpredictability put into play, clear historical references may be useful as familiar anchors. As long as the #FergusontoMadison movement produces truly novel situations, immediate and repeated references to historical models might be helpful signposts as the movement carves out unknown political territory. Or they could serve to confuse us, mistaking the models from the past as perfect templates for the present. The choice of battle cry is a small but concrete example of the difficult challenge faced by YGBC and all the #BlackLivesMatter activists, ie how to claim a radical tradition, but also find ways to critically advance that tradition without repeating the mistakes of movements past.

Seven YBGC principals took their oaths while holding books of power. One of the seven, M. Adams, carried a short stack featuring a copy of Manning Marable’s book, Malcolm X: A Life of Reinvention. Coincidentally I had finished reading the book only about two weeks before. Before, I only knew of Malcolm's story through the Autobiography and a collection of his speeches. Marable's book makes for a timely revisitation, as Marable’s scholarship serves those who oscillate between fidelity to a bygone form of militancy and organizational strength, on the one hand, and on the other, new democratic tendencies that make space for contemporary voices that the older social movements never did. The YGBC core, strong in queer and female leadership, represents the shift in boldness of visibility, and therefore the paradox of today’s condition—we honor the radical past as a political statement but live in and help shape worlds unimaginable to the ancestors.

And yet some brutal realities have not changed.

As Marable tells the story, the event that first brought Malcolm to public attention (including, significantly, to the attention of the NYPD’s secret operations unit) happened in 1957. Malcolm put his stature on display when a crowd spontaneously assembled in response to a police beating of three Harlemites who had verbally intervened when they witnessed a young man being roughed up by NYPD officers. Two of the three men were members of Harlem’s Temple No. 7 (later renamed Mosque No. 7), where Malcolm had been minister for going on four years. One of them, Johnson Hinton, was beaten badly aross the face and shins and then dealt the further indignation of being jailed for resisting arrest. Malcolm calmed the vengeful mass, which had grown to an estimated two thousand and gathered in seething anger outside the police station. To the frightened amazement of police, Malcolm did what they could not—he sent the Fruit of Islam home with a wave of his hand and authoritatively dispersed the crowd. Later, when, in a #Ferguson moment, a grand jury failed to indict the officers responsible, Malcolm blasted the decision and his life as a public political voice began.

Malcolm’s emerging politics generated friction in all directions—between him and the white establishment, between him and the largely southern Civil Rights leaders, and, fatefully, between him and Nation of Islam leadership. Elijah Muhammad lead the NOI on an apolitical path, basing its low level of engagement with current events on an ideology of separatism and self-reliance. But political differences are not what drove Muhammad to dismiss and eventually attempt to silence his top minister. Same with personal jealousies—they played a part but did not define the split. The split hinged on Malcolm’s knowledge of and negative response to Muhammad’s exploitative sexual adventures, which played out in the insular circle of his young female personal secretaries. In other words, for these men, Elijah Muhammad and Malcolm, who perceived themselves as dealing with fates of entire peoples, destinies and histories writ large, the absolute and irreconcilable source of conflict seemed to come from the realm of intimate relationships and personal sexual behavior. Here again, contemporary relevance is not hard to spot.

It is tempting to take the story as simple confirmation of that adage by now worn thin, that the personal is political. Of course it is. But that is a starting point in an analysis, not a final conclusion. Also, there can be no way to adequately frame the misdeeds of the Messenger according to today’s points of reference, supplied as they are by a toothless left reduced to spending enormous energy parsing microaggressions and individual cases of sexual misconduct on elite college campuses while the business of brutal capital accumulation proceeds without obstacle on all fronts, churning up lives by the millions. Here is the value in Marable’s telling of the story, the lesson for today. He throws into high relief Elijah Muhammad’s sexism as more than a matter of interpersonal politics. Rather, it was a general political disaster.

Muhammad and the NOI foregrounded black existence as the everyday contradiction, and claimed that it could be resolved only through adopting the Messenger’s teachings. That meant accepting a disciplined, absolutist structure and a readymade racial theology. Because of this very rigidity, the NOI found great success (as exemplified by Malcolm himself) in cultivating membership from among the current or ex-incarcerated, thereby introducing into the NOI a pronounced class element. The numbers of rank and file who came out of the urban street culture differentiated the NOI from the Christian middle class blacks who were the face of the Civil Rights movement. Malcolm’s work with the educated activists he attracted to his Organization of Afro American Unity and his late drift towards the MLK wing of black activism produced class tensions incommensurable with the dominant NOI culture. The same could be said of his revised racial analysis, based on the multi-racial realities he witnessed on his international travels. Thus, Malcolm’s evolution as a political thinker and organizer resulted in tension traveling in multiple directions. A scandal falling within the zone of any of them might have grown into a general crisis, unraveling relationships along all lines of fissure.

That event happened to explode within a set of relationships in which power was distributed according to gender, as it happens in an autocratic context by which the women of the NOI were made clearly subservient to the men. Beyond the extremism of Muhammad’s own behavior towards women, this framework for managing gender roles and divisions of labor brought the unpleasantries of contradiction to the intimate sphere, including in Malcolm’s fraught and unsatisfying connection with his wife, Betty (one of many controversial aspects brought to light in the book—watch this video for short but intense debate that touches on Marable’s treatment of their private life). But it is important for us to recall that the women who bore the Messenger’s children, and who had their lives strictly and cruelly constrained afterward, but who chose to never describe their experiences to people outside the NOI, did not use the terms made familiar by second wave feminism, “the personal is political.” In relation to the discourse of second wave feminism, the women of the NOI lived apart in time, place, and sociopolitical context. 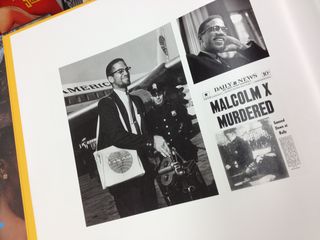 Marable certainly makes it clear that Malcolm’s great blind spot was his inability to form a political analysis through the lens of gender. Nevertheless, Marable’s complete tale makes me believe that the oppressive gender dynamics at the top of the organization caused a split because Muhammad’s serial transgressions could not be kept separate from the other tensions then also eroding unity and trust. Rather than reducing Muhammad’s infidelities to a matter of interpersonal politics, I believe it is more useful to think of Malcolm as having to navigate a layered matrix of contradictions in which alternately a race, a class, or a gender fissure might take center stage as the focal point of a crisis—all while the other fissures remain in play and can never be excluded. Seen in this way, the legacy of Malcolm even fifty years after his assassination provides us with a new starting point. Far from being an end, diversity is the problem with which movement partisans always begin—and not a diversity simply of static social identities but rather of constantly shifting and differently weighted antagonisms.

An oath taken today on Marable’s book says this: We who were once invisible even to our own esteemed leaders, who have suffered exploitations seen and unseen through generations, are, as the ultimate survivors, central to the struggles ahead. No more blind spots, no more excuses.

Having to negotiate between a powerful historical example and their own lived experiences—absorbing The Then but finding ways to act effectively in The Now—is undoubtedly a tall order. When social movements really succeed and change a society, one consequence is that later generations have to contend with the received history. Fixing histories in Hollywood movies, stone monuments, and passive holiday observances does the opposite, it severs the past from the present. Casting contemporary problems as unfinished movement business is a way to connect the achievements of the ancestors to the challenges of our time. The YGBC-led activism in Madison is more than an inspiring local manifestation of the post-Ferguson movement for racial justice. With demonstrated commitment, a strategy of issuing radical (and radically realistic) demands, and an evident openness to tactical creativity, this movement has the potential to play out as the best case scenario, whereby a fresh culture of political engagement reinvests the retro-saturated cry ALL POWER TO THE PEOPLE! with a multi-dimensional analysis and intersectional agenda.

Finally, in addition to quoting from the past, and perhaps as an antidote to the pitfalls of scripted nostalgia, the other stand-by call and response chant at YGBC events leads from the present moment in the other direction, towards the future, in words and feeling. It is a chant that lays claim to future victory—something that will happen—in a contemporary cadence equally suited to the sporting spectacles out of which it was born and those celebratory moments in this new struggle, when we look around the occupied intersection, at each other, amazed to see that we really are the leaders we have been waiting for.

that we will win!

that we will win!