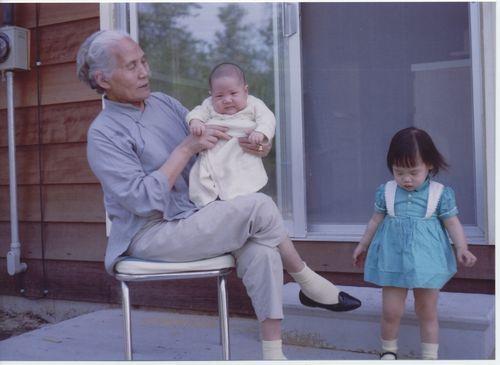 the getaway that left questions

Walking home from the hardware store, I was lost in my own thoughts when a rising gutteral roar turned my head. My eyes settled on a remarkable scene unfolding in comical slow motion across the street from me. The first thing I saw was a young pale-faced man in a name-patch uniform lumbering across the lot of a BP gas station, apparently at a full sprint, but weighed down and misbalanced by a beer gut so big that he might have rolled faster than he could run. Then I saw what he was running after. Super loud but super slow, a rust-eaten nineties mufflerless Caprice with a young black man about two-thirds reclined behind the wheel lurched out of the lot, accelerating at a rate just barely faster than the man on foot. For another two seconds it was a contest, but the car gained in momentum what the belly lost. The chase went into the street but after another moment it was all over except for the cursing.

I deduced what had happened easily enough, but the meaning of the event is not so simple to determine. To my mind the story of this one event can be interpreted in at least three ways.

1)    It was a routine drive-off from the pump, the kind of loss-leading nuisance that vexes small retailers daily, the costs of which are built into the price of purchase.

2)    It was a counterproductive assertion of entitlement, feeding the perception in the secure spaces of white America of a growing and increasingly dangerous black and brown criminal underclass.

3)    It was an act of everyday resistance, a concrete, elemental, but banalized fuck you of the kind for which even the anti-capitalist activists of Occupy Wall Street essentially lack the guts.

These interpretations do not hold mutually exclusive purchase. In fact, all of them make sense simultaneously because of the subject positions in play, not only across the spectrum of positions but within them. Consider the players. First there is the station attendant. Then the driver/perpetrator. There was a white man watching from one of the other pumps. And there was me, witnessing from across the street. The multiple interpretations move across the complexities of and between these subject positions.

My first assumption was that the paying customer at the pump would tend toward interpretation number (2), but who knows; there are ostensibly anti-racist white leftists around here among whose questionable ideological merits include the capacity to rationalize even the most anti-social of behaviors on the part of African American persons. There was part of me that hoped the driver himself harbored a feeling going in the direction of number (3), but it was probably more like a perpetrator’s perspective on number (1); he was likely already thinking about how to get his next tank of gas as he pulled into traffic. He already had to seek out a non-pre-pay station for a fast one, and how far could he get on a single tank of gas, in a guzzler? For the station attendant thinking about his job—how to explain the incident to his boss, maybe having to fill out a theft report—number (1) might be the go-to interpretation. But the driver was an African American man, with all the stereotypical indicators of an inner city migrant, quite out of place in Middleton, Wisconsin, a town less than 2% African American. With an outsized pride of place, some residents of Middleton (adjacent to where I live in Madison) actually believe that Middleton is one of the country’s “best places to live,” as trumpeted in mainstream media reports. Would these factors of race and social exclusivity figure into the station attendant assigning number (2) as a meaning?

Finally, the station was a BP. After feeling the frustration of both last year’s impotent post-Deepwater Horizon boycott campaign against BP stations, demonstrating that consumers really do not have the power to meaningfully punish transnational corporations, and of the current inability of the Occupy movement to exercise a power beyond changing the national conversation (which I acknowledge is huge, gratefully), I tended to see the episode as an example of number (3). I was actually glad to witness an action that could be described an unapologetic fuck you—after all the devastation (which is still inconclusively known, but constantly upped in estimation) in the Gulf of Mexico and BP’s proven impunity—finally! Inarticulate or not, politically meaningful or not, counterproductive as it was, for one short moment, in my mind I quietly saluted the driver.

But then I felt terrible afterward, for the knowledge that the tendency toward racial profiling in an area where even I, a Chinese American, routinely get stared at had just been fed the equivalent of an energy drink by this young man's action. Also for what such an act of disobedience says about the conundrum facing the Occupy movement. That is to say, significant parts of the Occupy movement must show that they can make progress in creatively addressing the system it critiques, opposes, and abandons, as one that is fundamentally racist. But the all-important African American street element, having suffered thirty years of massive incarceration and everyday police repression, is basically neither politically present nor self-consciously politicized, made up of individuals existing in survival mode, same as the driver of the Caprice.

Finally and not least, I felt the negativity of the continued erosion of trust that goes along with another business perhaps deciding to safeguard against theft through pre-pay means. On the other hand, why should the self-satisfied town of Middleton expect a different standard of public trust than what millions of people live with in Chicago, Milwaukee, Detroit, and other places across the region? Another salute....

I witnessed a crime. Or was it an act of resistence?

Is an interpretation informed by racism in any way a reasonable response?

If not, then how does one begin to address racism when those who racially profile their fellow citizens believe it reasonable?

What hope have we that the everyday daring of the most economically desperate become self-consciously politicized?

How do those of us who are less daring than we need to be model ourselves on the driver and inflict a pain, no matter how small, measureable in units other than webpage hits?