An Apartment Show in Barron's 'Hood

When in New York I always get to at least a couple of museum shows but sometimes I wish for a view closer to the ground. It is not so easy to see self-organized weekend-only shows on short trips in the middle of the week; people of the grassroots mostly have day jobs. This time I got lucky. I found out about an apartment show in a sky pad, a one-bedroom unit vacant between leases. The show was titled Tall Non-Fat Raspberry White Mocha Latte and I was anxious to see what was the spin on our current First Daughter, author of an enthused tweet praising that particular Starbucks confection. Through the magic of Facebook Messenger I made an appointment for afternoon viewing. I was glad to find that this was not merely a show of condemnatory statements. This was about the culture that produces a Trump family, and the culture produced by the progeny of Donald Trump. The setting was key: an architectural blandness passing for luxury mirrored the premise of the show, the title of which encapsulates a culture of cross-branding oneself in the service of corporate everything. 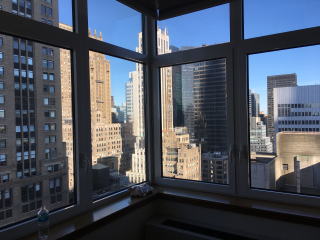 For a DIY show of pictures and objects by young artists linked through shared elite art school training, the show did not deviate far from expectation. There was cleverness on display, strong enough to overcome minor negatives of literalness and formal predictability. Substance, in both make and idea, won out over the pitfalls of cliche. Thanks for that go to the artist organizers, Hao Ni and Amanda Nedham operating as Investment. Setting the tone for the whole show, the gallery text on Investment letterhead is an extended excerpt of a pre-2016 Ivanka social media post. Amounting to a self-portrait both banal and branded, Ivanka walks her fans through a typical day in the life of a 1% working mother. Investment’s playful but emphatic treatment of Trump World, given the unstoppable disaster that is the Orange Tweet himself, is a good way to treat the subject without being tuned out immediately as merely another whistle in the cacophony of anti-Trump noise. [gallery text]

Amanda Nedham’s Incorruptible Burial Bathing Suit (2 piece), a swimsuit made out of a Rolls Royce dust cover and hung limply in a bedroom closet, supplied an unambiguous riff applicable to our New Gilded Age. Shown in this nondescript but upscale tower at 425 Fifth Avenue, some nineteen blocks south of Trump Tower at 725 on the same street, the pathos of the unfilled garment presented as the poor effort of the rich neighbors in a rich part of town. Or, as the never worn dreams of an ultra-monied class still on the hunt for a status more often overshot than actually attained. Because, as the family in charge knows, it is all about aspiration, and when that fails, envy. This is a fact of the ruling class dating back to the glory years of imperial tombs, a lineage Nedham grabs in the form of a Han Dynasty suit pattern for the garment.

The bathroom was reserved for the most grossly poignant work, two replicant George W. Bush paintings commissioned by Sam Keller from a canvas-on-demand painting service in China. With the Bush family forced into irrelevance by the bulldozing Donald – exactly the kind of hibernation many of us wish for the Clintons, to be honest – a condo bathroom made for a perfectly creepy stage for the second-order objects representing the space of a literally unclothed emperor. The reappearance of W as brush & oils man marks nothing if not the passage of political decay; time was when the child of the president had to get elected himself before actually having a say in the office. The other thought is, naturally, if only we could outsource the current reality show as easily as does the artist. 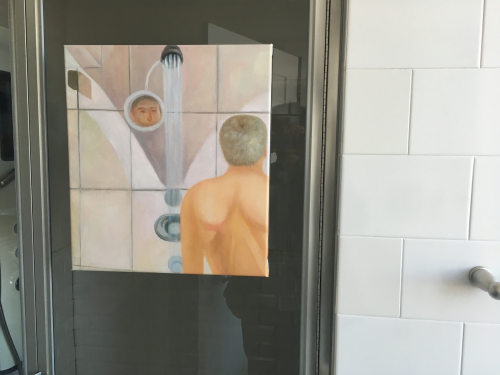 With one exception, the works were person sized or smaller. Two of them stayed with me for materially compelling reasons. Christopher S. Papa’s untitled arrangement of eight coffee cup constructions brought the alley into the condo. The formula was simple. Sprinkle into a mixture of plaster and joint compound the detritus of the streets – wrappers, bone, fibers, bottle caps, bits of paper and plastic, plain dirt. Pack discarded coffee cups with the inclusion-laden sauce, let dry. Then, as a rock hound might, cut across the cup and polish the revealed surface. The artist orchestrated a lo-fi, accelerated geological process, rendering bits of waste mysterious and candy-like in its artificiality. Apart from Ivanka’s love for branded beverages, I did not make an obvious connection between this work and the exhibition theme. But the weighted cups felt very good in the hand; the temptation was to pitch from the stretch and see how far one could lob it in the direction of Trump Tower, breaking the condo window on general principles. (Another reason to search out the DIY shows; you can get away with handling the work.) 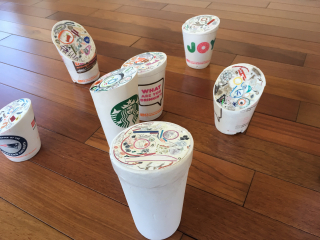 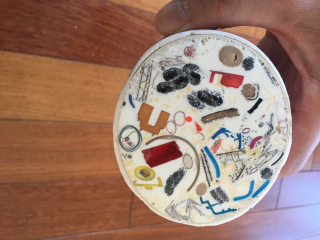 from trash to good-looking trash...the story of Trump?

The second materially rich work that rates a description is Yi Xin Tong’s Gunshot Skins, an elegant recombination well tuned in placement and components. The heart of the piece is an aluminum kettle of unknown vintage, turned into an object of seductive intricacy through its career as a target for shooting practice. Flying bullets and bird shot shaped the form, a balance of patina and perforation; the artist finished the work by adding to the kettle’s interior a stash of coarse orange peel. Why orange peel? Associations include orange peel tea, Chinese after dinner rituals of tea and fruit, and not least the formal parallel between the torn metal and the organically curled and stiffened peel. Accenting the kettle with dried fruit was not the only smart decision. The kettle was suspended six inches off the floor by a single dusty orange string, rigged close to the wall and anchored at a height of about seven feet. The emphasis on the downward pull gave me visions of firearmphiles interrupted by Ivanka infomercials touting new citrus aromas made from orange skin peeled off her daddy. 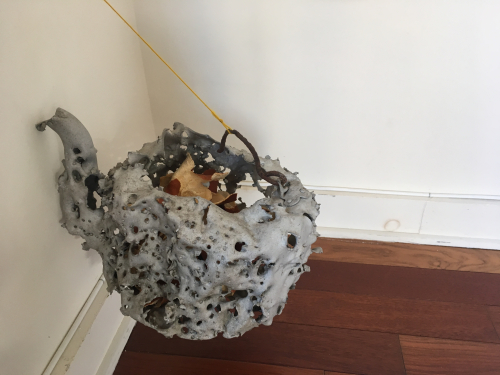 The one exceptionally scaled work of the show deserves the last word. This was Jenyu Wang’s wall projection of drawn theatre curtains. Simple and seemingly static, the video made the whole wall into an obstruction of sight, with the illusion of a stage or screen in place behind drapes that are never pulled back. Installed in the bedroom opposite the vista windows of the open plan living area, the chamber added a darkness and opacity fitting for a time of heightened dread. The point being none of us can see the next disaster before it happens, upper floor views out into the Trump-o-sphere of Fifth Avenue notwithstanding. It is not Trump that has been normalized but rather the fear he rode in on. If this is curtains for democracy, then I suppose we have only the definitive documentary for to wait – these particular curtains having been recorded from a seat in one of Chicago’s Siskel Film Center screening rooms. We are all limited to the spectators role because this is their family show, their story, their power. The rest of us wait, hoping the curtain on an act II never is lifted.

For my live visit Wang’s Curtains was imperfectly projected; unfortunately for me, I saw the work as intended through pictures. The loaned wide-angle projecter was returned to its owner just before my hit-and-run viewing. I took in the work at smaller than ideal scale. The takeaway there was that the midtown highrise apartment show was not immune to the impromptu conditions of a do-it-yourself scene. Some of these young artists are ready and deserving of exhibition with more official support. Until that happens, and maybe even after – considering the courage necessary to train a load of artists’ sights on the life and times of Ivanka, daddy’s favorite, and other such whimsies of politicized aesthetics – temporary takeovers of elite real estate will work. 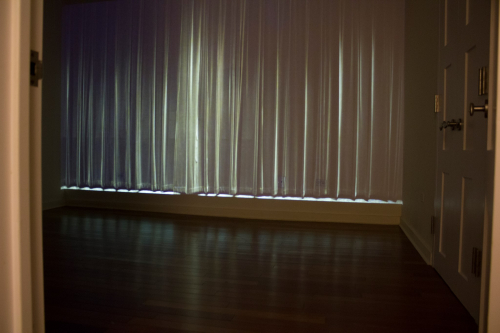 show over...or yet to begin?