After I graduated from college and before I went into my current work, I spent a little less than two years working for a troubled youth treatment program in Pennsylvania called VisionQuest. It seems like a dream now, and not just because it was twenty years ago. VisionQuest, in both the camp and wagon train components that I worked, 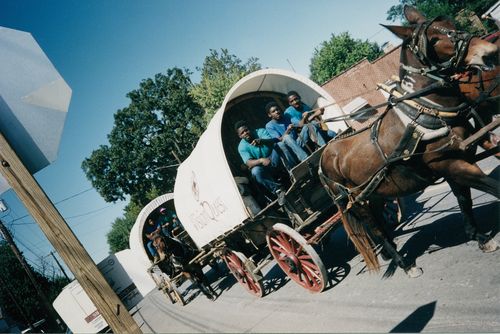 was simply its own culture and universe, far removed from the mainstream of conventional life. As a work experience, it was exhausting and exhilarating in the way that only those unsustainable experiences of time-bound collective mission-defined jobs are. I guess this period was my version of going “into the wild”—a common experience for my generation of privileged, idealistic, and discontented college-educated young people. (I like to tell people that had our guy Christopher McCandless made it back across that river, he probably would have been back in grad school in the next year or two.)

Anyway, at that time the VisionQuest treatment milieu was a combination of boot camp, summer camp, circus parade, inner-city youth mentoring, and staff party scene. The youth were mostly from Philly and Pittsburgh, with a few individuals from Erie, random suburbs of the big cities, or Trenton, New Jersey. They were sent by courts, not parents. They weren’t “at-risk”; they were already in trouble, some of them pretty seriously. The company’s treatment program was known for its tough love and spiritual philosophy—emphasis on both the “tough” and the “love.”

The youth were both: tough and loving. I grew to respect these kids, for their survival skills, their loyalties, and most of all, for their amazing intensity. From a distance—when I didn’t have to deal with their shit, right in my face—I even regarded them with a kind of awe, and still do. Some of these kids, who’d grown up under unbelievably challenging, violent, and amoral circumstances on the streets of North Philly or The Hill in Pittsburgh, would die for you, I am not kidding. But that is, only if you had gained their trust and proven yourself. Which is of course the hurdle most adults never got over in relation to these kids. Especially the white liberal educated people who came to work as staff—not all, but almost, at least in my time there. The black and/or working class, less educated, ex-military, ex-law enforcement, ex-semipro sports staff tended to relate better, and could occasionally match the intensity of these youth. Those of us who succeeded at VQ—and, believe me, anyone who worked there for a year or longer qualified as having succeeded—mostly were of the latter demographic and social origins.

I, with my high falutin’ college degree and traveling box of books, was unusual among the “senior professional staff,” an internal earned designation for the reliable employees who had demonstrated an effective rapport with the youth, meaning, the staff who were committed, who weren’t going to be quitting by dashing out in the middle of the night and leaving the kids with just another experience of broken trust. Many of the elite-educated hires ended up leaving in disgust or horror after witnessing one too many incidents of physical restraint. In truth these incidents could be rather violent in a rough, boys-on-boys kind of way. After all, we’re talking about some big, thuggy sixteen, seventeen, and sometimes eighteen year-olds. Kids with scars, muscles built from playground basketball and detention push-ups, and sometimes a gunshot wound. Who each, nearly to a person in my experience, anyway, had hearts of gold, not to mention unbelievable potential. 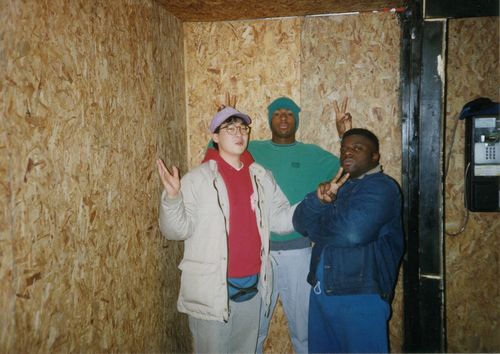 Restraints typically ended in hugs, and occasionally in tears and therapeutic breakthroughs. That was only the most dramatic form of visible love. Affection and care permeated the program and camp environment in lots of other ways.

The successful staff tended toward the profile of the youth in other ways, perhaps unsurprisingly. For one thing, a lot of the staff were somewhat unstable in their own personal lives. Cheating lovers, recreational drug use, too much drinking, borrowing money with no intention of paying it back—these are run of the mill behaviors in many corners of the adult world. But among the Senior Professional Staff (SPS) of a youth treatment/placement agency? Not ideal, at least in the conventional thinking. But VisionQuest was anything but a conventional culture, and that was the strength of the company and its treatment model. The dysfunction sometimes extended to the staff, but the fundamental integrity—the kind you can’t fake, especially under the scrutiny of some of the street-smartest kids in the world—was there, too.

To this day I continue to believe in the VisionQuest way; in my short time there I saw too many transformations to not be convinced that we were doing something very right. I still treasure my earned status as SPS, symbolized by "the button on the leg," inspired with permission by the Bishkawaliki tradition of the Crow Indians, an unforgettable detail to anyone who passed through the VQ world. Though I really do not know what the camps and the work is like now, the company’s website reflects much of what I recall of the VQ culture.

I have only ever spoken in public about my time at VisionQuest once, at Mess Hall about six years ago. The reason I am thinking about all this now is because I just did what people can do now with the web, which is search for names from our pasts. In a moment of nostalgia for the past, I searched for a few of the distinctive names that populated my world back in 1991. One of these names was Tony Zasa, a VQ veteran who even then qualified as one of the old guard. He led my staff training group and inspired me to tough out the first few weeks of what I now realize was the most challenging job I’ll ever have. He was no-nonsense, a straight shooter who had helped quite a few youths over the years in the VQ tough love way. I credit my positive experience at the company in part to having been trained by him.

So you might imagine my shock when a search on his name returned this old news item. 466 pounds of cocaine and 75 pounds of meth? That is not somebody having a weekend party. My god, Zasa, what happened to you? Take off that button.