a field trip, in truths

[This essay was included in Meandering Methodologies, Deviant Disciplines, a publication produced by Public Art Saint Paul. The book is the final document from the four-year City Art Collaboratory project that brought scientists into collaboration with artists.]

My interest in science and art resonates with what philosopher Alain Badiou calls the “truth process” in his book Ethics. Written as the Yugoslav Wars unfolded, and particularly with the failed response of the Western powers in mind, Badiou composed his system to counter moral systems based on the so-called natural rights of man. He targets the cynical flexibility resulting from the universalizing claims of liberal humanism. With Badiou’s framework in mind, I found myself intrigued by the field trip taken by City Art Collaboratory scientists and artists to Coldwater Spring, as reported on the City Art Collaboratory blog. Knowing that the area around Coldwater Spring, above the confluence of the Mississippi and Minnesota rivers, was the site of an anti-road campaign only several years after the Yugoslav Wars, I wonder if applying Badiou’s language to a consideration of that site adds productive complexity to his ethics of truth, between abstraction and materiality, in space more than time. In understanding Coldwater Spring as a source not only of water but also of truths, and considering the ethical demands it might make in turn, I hope to advance Badiou’s political aims, which I share.

Reviewing Badiou’s system is the place to start. Greatly simplified, Badiou describes the truth process as opening with the event—a specific circumstance that occurs in time, immanently rupturing a situation, and that, whatever its temporal duration, “vanishes as soon as it appears.”1 The event divides consciousness, or a historical narrative, or a demarcation between self and other, or one’s relation to an imagined ideal, into the situation before and the situation after. But once perceived, the event is always already over. Those who experience the event are afterward called to observe a fidelity to it, and this is the basis for Badiou’s ethics. Performing this fidelity—thereby becoming an agent of truth, touching the eternal—is the ethic of the truth process. In plain language, I take this to mean carrying forward with new being, new thinking, or changed conduct that has been demanded by the revelatory event. A basic ethical failure is to go forward as if the event had not happened. The most extreme infidelity is the simulacrum of a truth, a dishonesty that legitimizes war. For Badiou, this is evil.

To support his analysis, Badiou returns repeatedly to his four-fold subjective “types”, across a spectrum from intimate to public realms: politics, love, science, and art. In politics, the subject is induced through mass experience; society is the actor. Love resides at the opposite end of the intimacy spectrum, inducing a subject in the space between individual persons. Science and art serve as intermediate zones in which the individual and the social meet. To take one of the many instances where Badiou uses the fourfold matrix to illustrate his point, he lists as exemplary events in order of politics, love, science, and art, “the French Revolution of 1792, the meeting of Heloise and Abelard, Galileo’s creation of physics, and Haydn’s invention of the classical musical style.”2 Thus, in politics he means revolution. By love, he means the life-changing intensity of amorous relations between individuals. Science and art, activity attributable to either individual practitioners or group efforts based on shared frameworks, produce paradigm-shifting insights. But he never presents his cherry-picked examples of events as existing within layers of history, much less in relation to one another.

Moving beyond the decontextualized examples of truth events he prefers, grounding Badiou’s language in a particular place reveals that different subject types may articulate truths along a common thread; in the Coldwater example that follows, in some sense all four are present. The different events entail multiple fidelities but are bound by relation of varying depths of time to the same place. Together, they produce a compound truth, at times contradictory but moving toward resolution. We could say the original truth is the spring itself, the existence of which was and is a hydrogeological event that occurs outside of human purpose.

Science can make truths legible in ways that no other endeavor can, but in contrast to the theory of relativity or the invention calculus, the self-evidence of the spring precludes the need for a formally presented insight. All science of the spring, from the earliest descriptions by explorers to latter-day hydrological measurements, only supplements the fundamental fact of flowing water. 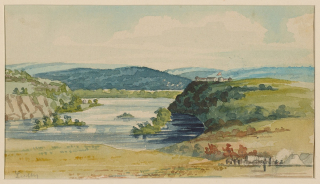 A series of Coldwater truths across subject types can be traced back to a work of art: a shimmering 1856 watercolor landscape by Alfred Sully, a commissioned officer and West Point graduate. The painting depicts the area from the perspective of the western bank of the Mississippi, above the confluence; Coldwater Spring is in the wooded foreground and Fort Snelling is off in the distance. The picture glows with summer light and the expansive skies of the northern prairie, capturing a moment when the settling of Minnesota was beginning to accelerate, and the sacred place Mndota (“where the waters meet”) was subsumed by its strategic significance. As the subject type art, the watercolor preserves a truth in the image and also exists as a truth-event in its objecthood. Sully’s image presents an event not as artistic innovation (Badiou’s preferred art reference), but as a document of opposing vectors—that of the free Dakota lands as represented by the unfenced terrain, or the simulacrum of democracy advanced by the settler nation, monumentalized by the fort. Competing fidelities ensued, resulting in the Dakota Uprising of 1862.

Sully seems to have observed a fidelity to the events of his own artistic creations. Even as he carried out his orders to secure territory, Sully is reputed to have been an advocate for Indians, treating them fairly and honestly, if not softly. To add to the truth in art already present in his Mississippi riverscape, an event in love seems to have emerged between the Anglo Sully and the great romance of his life, Manuela, his first wife, a Californian Chicana who died tragically young. Later, perhaps readable as a sort of fidelity to his mixed first marriage, Sully wed a French-Yankton woman in the Minnesota Territory, thereby contributing to the polyglot universe he found in the territorial settlements. One of Sully’s granddaughters was Ella Deloria, an ethnographer who conducted formal research on Navajo, Lumbee, and Lakota cultures. The social scientific reports she helped author contributed to both government recognition and tribal self-recognition. These published reports were events in Badiou’s sense; the reclamation and growth of tribal identities are the fidelity.

To add to these linked events in art, love, and science, and to complete the poetic redemption of the compound truth, one of Sully’s further descendants, the activist writer Vine Deloria Jr., carried forth a four-generations-late fidelity to the 1862 Dakota Uprising that Sully himself played a part in suppressing. Deloria’s 1969 book Custer Died for Your Sins helped to shape contemporary indigenous political consciousness and became a key text in the resurgence of native resistance against the imperialism of which his great-grandfather was a historical agent. Moreover, Custer Died for Your Sins came wrapped up in an event of its own moment—in the subject type politics at global scale, i.e., the worldwide systemic convulsions of the late 1960s and early 70s. A generation after that, a fidelity to the heyday of Red Power was an element in the production of a new political event, one that returns the thread to Coldwater Spring.

In 1997, in response to a planned highway widening and new interchange that threatened the spring and nearby sacred stand of oaks, a resistance movement rose up and established itself physically as an outlaw road-block encampment that became known as the Minnehaha Free State. Eventually, this became the nation’s longest ever blockage of a government road construction project. The campaign was comprised of those fighting to preserve the oaks, property owners resisting eminent domain, and the Mendota Mdewakanton Dakota, whose claims to tribal identity are interwoven with their claim on the spring. The Minnehaha Free State produced a militancy that kept the encampment going for sixteen months—we could say this was partly in fidelity to the indigenous rights and identity articulated by, among others, Vine Deloria.

The area being defended was the geographic heart of a truth-event, fidelity to which was evident not only in the road-block, but even more so through the years of grassroots political action, testimony in public hearings, court challenges, and other kinds of dedicated resistance. That fidelity prevailed to the degree that Coldwater Spring remains free flowing, and, through persistent striving, it was eventually granted governmental protection. In grappling with the problem of ethical consistency—key to combatting the moral flexibility of the neoliberal human rights frame—Badiou posits perseverance (in performing one’s fidelity to an event) as the opposite of opinion. The preservation demands made by the activists of the Free State may not have been achieved in total (the oaks were destroyed), but the perseverance following the event undoubtedly exposed the original position of the state—technocratically insisting on the road and dismissing concerns about the spring, but then later scaling back those plans—as mere opinion.

The truths of Coldwater Spring described in terms of Badiou’s system of ethics begins with the spring itself. Additionally, the spring exists as, and in relation to, multiple events, with fidelity to one event sometimes contributing to the production of another. It meanders through all four of Badiou’s subject types, by way of bloodline or political narrative. In a constructive departure from Badiou’s theory, applying his language to Coldwater Spring shows that a particular point of departure in space breaks linear time, stacking events into a single, compound truth. Furthermore, the original event, unlike the disappearing acts of Badiou’s exemplary events, remains open, perpetually reinvigorated by its flowing water.

Seen this way, the City Art Collaboratory visitors who quaffed clear water from the spring may yet express fidelities to the land in ways unforeseen, or may find themselves ensnared in their own Coldwater-threaded events—certainly in the science or arts of their training, but equally as likely, in politics or love. The hypocrisies of capital’s moralistic cloak will never be punctured without the blades of compound truths—Badiou supplies the language, but Coldwater Spring is the pure fact and the gushing event.

1 Alain Badiou, Ethics: An Essay on the Understanding of Evil, translated by Peter Hallward (Brooklyn: Verso, 2001), 67.