the mural experience in kalamazoo

The first few pages of the print prospectus for Kalamazoo College are a marvel of branding and not even in a bad way. The rest of it is attractively functional, a statement of confident modesty. Economically worded passages describe the best that a small college has to offer, through the particulars of a Kalamazoo College education, or should I say a Kalamazoo College experience. Whoever produced this booklet hit the sweet spot. They landed K exactly on the line joining the forward-looking and the reverential, the meeting point of the classically typical and the singularly unprecedented. All the top-tier private liberal arts colleges carve out their own space between the expected and the unique. K is no exception.

An experience is exactly why that type of education remains relevant, perhaps more so than ever. Forget that chestnutty nonsense about a citizen’s education or even the pleasingly vague platitude about critical thinking. The private liberal arts education is, in its contemporary essence, about cultivating individuals who can imagine themselves doing and being, or in other words, experiencing. Experiencing what? It almost does not matter. It is a type of person being produced, that is the important point—as social theorists would say, a subjectivity or a self. And this type—the person who expects to experience life—is not produced just anywhere, the prospectus implies. In fact it is produced outside of the academy, but that production happens erratically, and is more often than not self-motored. Academies such as K, by contrast, are factories producing a yearly crop, as reliable as the organic distributors now supplying their Sodexo-managed food service.

The persons who come out of these institutions become the artists, the business leaders, the scholars, the tech innovators, the service chiefs, the opinion makers, the record keepers, and the forward thinkers—the people for whom life is an experience first and work second. And a struggle maybe never. Privilege has its benefits. The learning atmosphere feels refreshing, earnest, and active, at least from my perspective as a visitor. 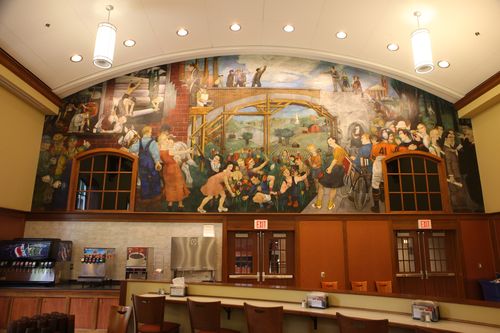 I made the trip to K College for the third time in thirteen months. All three visits were centered around an inquiry into the Philip Evergood mural The Bridge of Life, the dominant work of public art on campus. The mural holds the most visible spot in the most heavily frequented room, Welles Dining Hall, where most students spend at least some time nearly every day. The image of the town and college is populated by dozens of figures, only two of which are identifiably African-American. The rest are Euro-American. Two years ago the near-total racial homogeneity of the tableau was brought to the attention of the school leadership by a small group of students, many of whom were Posse Scholars from the working class brown and black parts of LA (Riverside, South Central, East LA), as an objection. The gap between the community represented and today’s actual make-up of the college and its host city, both of which are considerably more diverse than that dipicted, was flagged by the students as a problem.

The ensuing conversation between students, faculty, and administrators led to Christine Hahn, an assistant professor of art history at K, taking the lead on formalizing the exchange of ideas, with the goal of beginning a process by which the campus community in time might determine an action corresponding to the critique. I contributed to the first stage of this process on my visit in the spring 2012. At that time I sharpened the critique after meetings with students. I outlined an analysis that takes into account both historical trends and the position of the students themselves, and encouraged the students to recognize the limitations of a critique based on issues of inclusion and exclusion. Now it is a year later and in the latest chapter in this unfolding process the artists Sonia Baez-Hernandez, Conor McGrady, and I took turns presenting our ideas about the mural at a K symposium on Art and Critical Theory, further developing the lines of discussion. 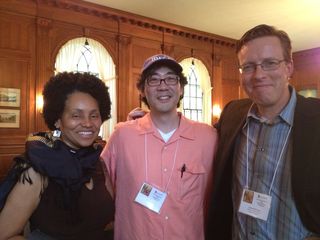 Sonia, who was just completing a year as artist-in-residence at the Arcus Center, delivered an overview of Evergood’s career and the WPA context within which he made much of his work. One of the relevant paradoxes mentioned is that some of Evergood’s works from the 1930s were explicitly linked to anti-lynching campaigns, and that Evergood himself identified with the socialist Left. As a believer in racial justice-as-social justice, he deliberately included African-American figures in many of his paintings and prints. Particularly interesting is the story related by art historian Andrew Hemingway about Evergood’s mural Cotton from Field to Mill, a landscape of laboring field hands, black and white, commissioned for a post office in Jackson, Georgia. The design attracted negative comments, resulting in Evergood changing up the composition to satisfy the local post master, who declared himself against any picture resembling “a cartoon.” But the final victory belonged to Evergood, and to the cause of racial justice:

Nothing was said about the iconography but, as [scholar] Beckham has emphasised, the imagery of black and white men and women all labouring in the same way contradicted the symbolic order of Southern murals at their most sensitive point. Moreover, as a postal worker pointed out when I [Hemingway] visited the mural, the range of colour phenotypes in the image indicates that sexual relations occur between black and white….Evergood may have compromised on formal matters in some degree, but it was a political achievement to insert a mural of coopertive inter-racial  labour into a federal building in the heart of a state where lynching was rife and whose governor, Eugene Talmadge, was an infamous white supremacist and one the New Deal’s fiercest opponents at state level.1

Considering his oeuvre and history of social engagement, I think it is fair to argue that Evergood’s racial politics are not well represented by the The Bridge of Life alone. A serious critique of the mural’s racial homogeneity must account for the artist’s record of making pictures that advanced the cause of racial justice, and that he did so in a time and place where taking such positions invited racist terror.

Conor McGrady briefed the audience on the murals of Belfast, where art and politics meet in contested space. Interestingly, Conor (a native of the region) emphasized the fact that the murals were typically painted as tributes first, but came to represent Republican or Loyalist neighborhoods afterward simply because they reinforced the already existing geographical divides. Visitors often describe the murals as turf signs, marking territory as belonging to one side or the other, but Conor’s contention is that the original motivation was something more reverential and commemorative. Thus, one lesson for the K community is that pictures prominently displayed in public spaces become part of the already-existing politics of that space, usually in ways that go beyond the original intentions of the artist. In the case of The Bridge of Life, it is well-recognized that members of minority groups often sit together for meals on majority-white campuses, and that happens in Welles Dining Hall, too. The temporary self-segregation of meal time, a dynamic that often has nothing to do with overt exclusions, in an elite school context is usually a way of building community among sub-groups. The meaning of the seating arrangements may feel somewhat different when the hall’s majority racial group is permanently echoed in a highly visible mural floating above all. In which case the mural may reinforce a message of unwelcome—more subtly than do the murals of Belfast, but nonetheless with the same constance of presence. In fact, this uninterrupted message of heritage homogeneity and the reminder of late-belonging it sends to students of color formed the heart of the students’ critique.

Which brings me to a couple of my points. The first has to do with the seemingly self-evident fact of the Posse Scholars and other students of color studying at K and being part of the campus fabric, indelibly and irreversibly changing the profile of the school from nearly all-white to simple majority. In the process, those students undergo a change in themselves, especially those of working class origin, in effect gaining entrée into the bourgeois class—a case of embourgeoisification, as it were. I believe that for the students to launch an effective and convincing case for a response project of some kind, their position must account for their own transformation in class terms, a transformation facilitated by their having been admitted into the exclusivity of an elite liberal arts education/experience. While it is always difficult if not impossible to assess an experience while undergoing it, asking the following question would seem to be a good start: Just as the former (unofficial and default) exclusion of students of color served an establishmentarian code and social structure, how does today’s (deliberate and planned) inclusion serve the same?

I can imagine the students with whom I met taking broad offense at my criticism of their position. One of them might well ask of me, who am I to demand an accounting of their own unfolding class privilege when she has a kid brother getting into trouble back home, a laid-off dad or a sick mother with no health insurance, and all three asking why she wants to go halfway across the country to attend a school they never heard of instead of UC Riverside? Or for another student, what does the admission into the school matter when he experiences the micro-aggressions and cluelessness of his white classmates and professors on a regular basis, people with little or no experience with people of color, with each instance sending the repeated message of you don’t belong here—not to mention the shockingly explicit racism he witnesses from time to time. For some working-class racial or ethnic minority student, the K Experience may be an episode they must simply survive. Having to see the faces in the mural is the everyday visual confirmation of their beleaguered position.

I get that it is not easy. But that goes to my second point. Contesting anything on the grounds of having been offended is a losing game in our time. When liberation politics turned inward, toward the interpersonal dimension, we of the margins made our sensitivities available to be appropriated by the Right. I reminded the students that the white conservative may in fact feel anger and resentment whenever he or she sees an image of Barack Obama at an intensity many times greater than the deep feeling of disgust I had when seeing images of George W. Bush. The field of affect as has been politicized by the left of color is now owned by resentment-driven conservatism as exemplified by the audience for right wing talk radio. I believe it is a strategic mistake to foundationally invest any initiative with arguments based on having been made to feel excluded, unwelcome, foreign, different, less than, or whatever—not because the arguments are untrue or the feelings not painful, but because conservatives launch from their positions the same argument much more vigorously. They have learned well. Conservatives have a lock on the victim thing.

This is only a sampling of the issues highlighted by myself and the others. We will continue the discussion at the College Art Association conference in Chicago, 2014, if not before.

Thanks go to the Arcus Center for Social Justice Leadership for partial sponsorship of this event. Special thanks to professor Christopher Latiolais and the Critical Theory cluster at Kalamazoo College.