race and rocky, or i actually went to see creed in the theater

I was eight years old when my dad took me to the Green Acres theater in Saginaw Township to see Rocky. It was just Rocky, not “the first Rocky movie,” since nobody had any idea of it becoming a so-called franchise picture, much less that some of us would be talking and thinking about it nearly forty years later. My dad is not a boxing fan but he always had a big spot in his heart for the city of Philadelphia, where he and my mother spent two of their early married years in the US before us kids came along. As noted here, Philadelphia as cityscape, underdog atmosphere, and supplier of extras is almost a recurring co-star of the series. While he enjoyed that part of it, for me the story of a nobody hitting the big time did it. I remember getting teary-eyed in the theater.

I was so taken by the film that afterward, maybe a year later, I got my hands on The Official Rocky Scrapbook (most likely from the books section at the Kmart that my dad often browsed for bargains). Even though I discarded that book probably thirty years ago, I still remember some parts of it. For example, where Stallone tells of the extras who made up the rowdy crowd for the championship fight, lured into the job by a free chicken dinner, a low-budget filmmaking tale if there ever was one. During a break in the filming the extras got restless and started booing and throwing chicken bones into the ring, rushing the shooting. Pretty funny. Stallone wrote the book text, beginning with the story of how he came up in the world of acting. Ultimately more important as a seed planted in my pre-teen brain than the film itself was Stallone’s account in the “scrapbook” of his vagabonding and early times as a struggling artist. When I learned of Stallone’s romantic wanderings on a shoestring, that sensitivity to the bittersweetness of the once-in-a-lifetime shot (or so we thought, before the sequels were made) made sense. For years afterward, Rocky was my go-to reference for popular films that refrained from victory endings. But as the film aesthetics and improbably storylines went from low-budget/semi-independent to designed blockbuster, I stopped paying attention. Another Rocky movie. Whatever.

Then a few years ago I read Redemption Song: Muhammad Ali and the Spirit of the Sixties by Mike Marqusee. Not only is the book an excellent account of Ali during his height as an athlete and his brightest, most dangerous moment as a public figure, but it is also a capsule history of racial politics as played out in pro boxing, which for much of the twentieth century was considered the ultimate in competitive sport. There is a great passage in there about Rocky as a kind of recuperation of the surplus aggression expressed by Ali in particular and by the Black Power and Black nationalism movements in general. By sketching out the white protagonist as the downtrodden, disadvantaged sensitive type and making Apollo Creed into a near-caricature of arrogance and showmanship, for Marqusee the writer/actor Stallone capitalizes on the racial fatigue afflicting the post-Civil Rights mid-Seventies white America. Marqusee’s reading of Rocky suggests that in only fifteen years—say, from the first Freedom Riders of 1961 being beaten by white mobs to a Best Picture winning film of 1976 representing a black champion as The Establishment—the racial power balance had been completely reversed. The movie seemed to say that in the year of Bicentennial celebrations, the forgotten man in the story of national progress was the white working class stiff, the hardscrabble guy true to his roots, just trying to get through life with minimal dignity.

I believe Marqusee’s reading of the film is only partially correct. I think he correctly reads the reserve expressed by white men in the face of Ali-style bombast as a quiet resentment. But he is a bit unfair to Stallone the writer, who in fact drew up the Apollo Creed character (and the whole all-black Creed team) as canny and deliberative, as a knowing performer. Establishing the Apollo character from the beginning as a thinking human being set the stage for the series, which went further in exploring a transracial rivalry-turned-friendship than almost any other dramatic film or series of films that I can think of. To me the curious thing is, after the first film and as the Rocky and Apollo characters move towards the intimacy of friendship, racial difference fades. The two fighters become increasingly less representative of their races, and more representative of the other persistent trope of boxing, that of the final alone-ness experienced by the boxer, that for fighters the social dimensions of life evaporate once an opening bell sounds. That the only peope who understand fighters are other fighters.

Lost in the development of the Rocky/Apollo friendship is a resolution of the racial divide identified by Marqusee. They end up just two good guys fated to be comrades, practitioners of a common craft and bound together by a common nemesis (Clubber Lang in Rocky III) and the common call to represent the nation (against Drago in Rocky IV). I went to see Creed with an eye towards this part of the story—how would the writers portray the fatherless son building a relationship with the surrogate, the one being a young African American and the other Philly’s most famous white ethnic character? Turns out the writers play it safe—social difference is indeed raised as a pivot point in one of the subplots, but it is not racial difference that has to get transcended. Instead, it is the progressive disability (hearing loss for a musician) looming in Bianca’s future that marks difference, to the degree of it producing an awkwardness that has to be negotiated between the characters. Racial difference as a fault line dividing society never really comes into play in relation to Adonis’s opponent, the white working class Liverpudlian “Pretty” Ricky Conlan. Post-Cold War globalization, the film seems to say, has turned diversity into a simple fact of life.

The series contributes to the naturalization of transraciality as a standard component of male bonding. I suppose this is an accurate reflection, on some agreeable level, of our half-imagined national progress. In his time Ali was reviled by a majority of Americans but has since been embraced as a living symbol of noble competition and principled living belonging to the whole nation and even the whole world. Presuming Ali’s politics have not substantially changed, this is a turn that speaks well of American society. On the other hand, Ali is no longer a threat, living out of the spotlight and having been rendered disabled by illness. His transformation into a silent figure now fighting a battle against his own body seems representative of the Civil Rights generation. Those still among us are ebbing, with a social voice losing its power, while the younger generations live in a diffuse, leader-variable social movement landscape—today’s heroes of justice are either accidents of media or else have been academically prepared to take the role. Young people now have more choice than ever and Adonis’s path is a chosen one. Rather than update the story by raising present day race-infused controversies and problems as background noise, the film’s story of dual redemption places in parallel two essentially individual journeys devoid of social impact. The resolution between Rocky and Apollo, it seems then, is transmitted to the next generation by diving into the bottomless well of contemporary individualism, where racial identity may be subsumed into mere personality and a black fighter (or retired white champion) is never more than a lone man fighting his personal demons.

*note: I loaned out the Marqusee book so I don't have it handy to quote or even double check. When I get it back (if I get if back), I'll revisit the parts recalled above. 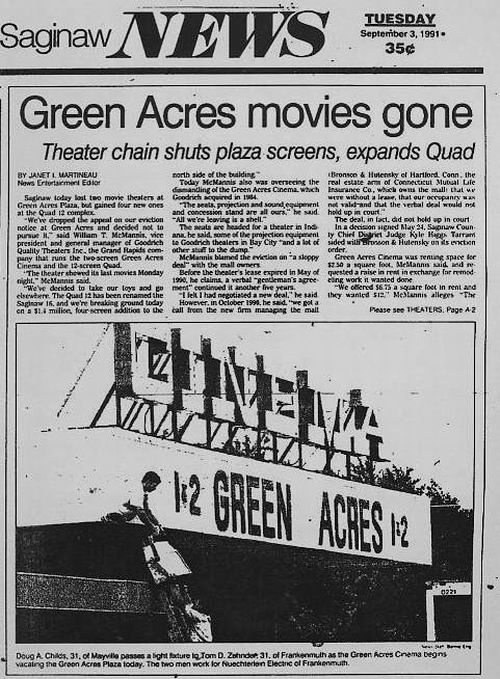 Two events this Saturday, December 3, one in Chicago, one in New York, both have to do with printing, with contributions from me.

In Chicago, South Side Projections will be screening Typeface, the Kartemquin documentary about the Hamilton Wood Type Museum in Two Rivers, Wisconsin. April Sheridan of CBPA put together a small show of letterpress work to go along with the film. I'll be bringing a couple of pieces to show. Plus, there will be a roundtable discussion after the film on the history and future of letterpress. Respondents include film director Justine Nagan, April Sheridan, Martha Chiplis of the School of the Art Institute of Chicago, Celene Aubrey of the Lillstreet Art Center, and me.

Event starts at 7 pm, but the venue, SHoP, will have activity going all afternoon, too. 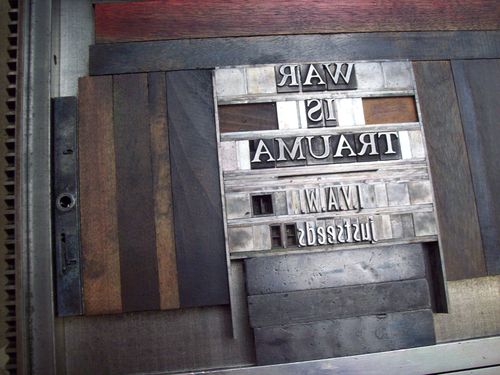 The New York event is the reception for the brand new War Is Trauma print portfolio from Justseeds and IVAW. I'm proud to say, not only did I contribute a print to this collection, but I helped Nicolas Lampert and Sgt. Aaron Hughes print the portfolio covers on my SP-15. We did it on Combat Paper, no less.

The portfolio is a terrific collection of thirty-some prints by a combination of Justseeds artists,

and a handful of invited "allies" of those two organizations:

And me, as a late addition to the allies list. Nicolas called me up to see if I could make a 16x12 print in an edition of 130 less than three weeks before the deadline. Of course I had to say yes!