reflections on the dry pool that is LA

What are they going to do about the water?

We had a great time in LA. It was a straight family production, our summer vacation, and thanks to some lucky online booking, we made it weirdly hip rich in style. In advance the social media brain returned me with a long list of recommended taquerias, city hikes, art places, beach tips, and cultural happenings. We got our samplings of perfectly ripe avocado on everything, great Korean BBQ and chicken wings, soul food on Crenshaw, moles and campechana, greasy breakfasts and fresh squeezed juices, and a couple of In-N-Out burgers. (Not the Midwest.) I saw a delicious show of 18th century French drawings and a Minor White survey at the Getty, the Watts Towers, and a brilliant Sam Durant installation at LACMA. We got our star spotting done with no effort (BJ Novak in the hotel lobby! John Mayer waiting for the elevator!). We were in the Valley for two days and then in Koreatown for six more—long enough to soak in an atmosphere. We made two trips to the beach, including for an evening stroll complete with surf rock at dusk. 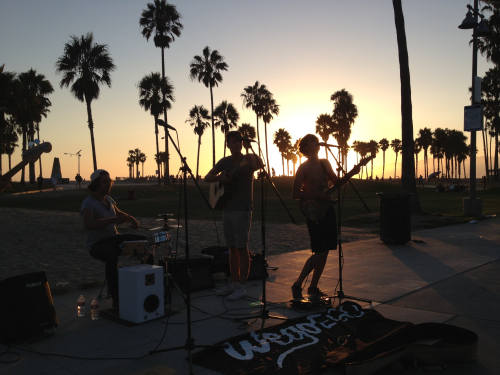 Over the course of the week there were a few times when the three of us said to each other, gawd, we could live out here. But then I'd think, what are they going to do about the water?

Some scientists who have studied tree rings and sediment cores say decade-long droughts have occurred regularly over the last couple of millenia, and that the twentieth century was by comparison a mildly wet period. Especially as exacerbated by human-caused warming, the current three-year drought is possibly the beginning of an extended dry cycle. Which aligns strangely with what I saw. There is no evident panic and drought seems to have become normal, at least in urban Cali, which uses only 9% of the stat’s total water supplies (as compared to 41% for agriculture). I spotted a couple of small lawns being watered and the traditional unbelievably many swimming pools. There were no conservation measures in the hotel that I could see. At ground level the drought was only visible through the newsmedia, same as when I am at home. Without spectacles like wildfires engulfing mansions, long term catastrophes are not easy to see up close.

We who live in the land of freshwater aplenty, where I generally do not need to think about how much water I consume on a personal basis beyond turning off the tap while I brush my teeth—what is our role in all this? The question presupposes a stake because, for one thing, even living between the Great Lakes and the Mississippi River does not guarantee access to water. This has been made clear by the controversies and political struggles in Detroit, where shut-offs of water service have left thousands of people dry and thirsty though they live within what was once one of the country’s great municipal water systems, in a city on the banks of a river that channels water from three Great Lakes towards the Atlantic. Closer to home, the Milwaukee suburb of Waukesha has made the first claim on Great Lakes water after the signing of the Great Lakes Compact, with access not guaranteed. Thus, water access in our time is a universal concern even where the supplies are abundant. For another, the western states drought will drive up the costs of living, growing food, and manufacturing in California and elsewhere. Though the reclamation nut fantasies of diverting Great Lakes water across the high West are impossible for many reasons, what is likely to happen is that years of drought will force people to relocate to water-rich regions, or remove California from the list of destinations for would-be migrants. The Great Lakes region will probably grow in population as more and more places around the world experience dire water shortages, perhaps reversing the multi-decade trend of depopulation. Attempted land and water grabs will probably follow.

Who can say how things will play out if meaningful numbers of people move into a region that’s been deindustrialized but is stuck with the political institutions of the mid-twentieth century? What resistant political cultures new arrivals bring with them—and with what cultures of resistance we who are already here welcome them—will help determine our shared path.

Our plane landed right on time. This is notable because we arrived in the New Years Day snowstorm of 2014, in the early evening darkness with more storming to follow—it would go on, more or less, for another two days, followed by the “polar vortex” cold snap. The runway was covered with snow, with snow-clearing machinery everywhere. We’d come in on a 13 ½ hour flight from Shanghai, tired and facing a long drive from O’Hare to Madison. The tollway hadn’t yet been plowed and flakes kept coming down. It was more than two hours on 1-90 to the state line.

The next morning I found out that ours was one of the few flights to have been unaffected by the weather. For many it got worse. My father visited his brother in Connecticut and was scheduled for a return flight to Chicago the day after our return. But the storm had moved east, even as a related cell continued to snow out O’Hare. He ended up having his seat re-booked and then canceled three days in a row, and finally caught flights home late into the sixth night. In the cliché resurrected for the season, I read in the news about other holiday travelers stranded and frustrated. In the end something like 18000 flights were canceled over those days, according to FlightView.com, as quoted by the New York Times.

For a comparatively routine weather snarl, my father’s was the longest delay I’d ever heard of. I mean, yes, there were several weather events rolled into one extended episode that covered a large part of the continent, but it wasn’t an extreme, historic weather disaster. It wasn’t Sandy or Katrina in scope, or a record snowfall. So why were the delays so bad?

The airline people told him that even as weather cleared, they couldn’t get their aircraft to where it was needed fast enough. Fuller flights and fewer routes to begin with means there is no extra flight time for scheduling mishaps, no room for work-arounds. My Compass collaborator Rozalinda Borcila might describe it as a system with no fat, no buffer, no room for improved efficiency, no slack to be taken up when needed.

With weather chaos likely to become more frequent in the coming years and decades, and the costs of operations only rising, the reliability of air travel may be maxed out already. What if this is the case? What might it mean for this particular human civilization to have reached another of its limits? Or, if disruptions of weather or other rising instabilities incrementally erode predictability and recovery times, perhaps the consumer flier faces a declining standard of experience? What if passengers end up having to deal with, say, chances of serious delays one out of every three or four times they fly? Or get slammed with the random two or three day flight freeze every few years?

If the air travel system is at capacity in terms of routes and seats, that explains why the only area for growing profits are in service upgrades and ever harsher fees. In a simple supply and demand dynamic, the increased prices for the same or worse experience will level off the growth at some point. For a critical mass of consumers, the cost won’t be worth the good.

Since air travel depends on a hugely inefficient combustion of hydrocarbons, as a contributor to the global carbon emissions equation, a limit on air travel is not a bad thing at all. The sooner it is reached the better. In terms of climate justice and rolling back emissions trends in the place where the consumption occurs, finally here is a First World Problem that some on the rest of the planet might care about—or a market limit that will actually help slow the acceleration of emissions (an acceleration that is fated, given the growth in air travel in China).

I suppose we will have the essentially inflated self-regard among the First World populace to thank. After all, nobody I know wishes to take unnecessary risks in flying—any safety related delay generally gets a pass, despite all the grumbling. I sure don’t mind. People value their lives to the degree that nobody pushes for less safety regulation in flying, not even the most extreme anti-government nutjobs. The spectacle that is every major aviation disaster dovetails nicely with the psychology of narrow self-interest, resulting in a horror experienced in individual imaginations far past that of other modern day traumas, enough to shore up any debate about air travel safety in favor of higher standards and true regulation.

So there seems to be a limit that will not be crossed.

But the other pressures that render air travel necessary and desirable continue to build. As people move around for economic and career opportunities more families will be more spread apart, even more couples. Also, the time demands that come with any line of competitive work will not lessen. So distance and time, compressed so effectively by air travel, will remain obstacles to the in-person experience that cannot be replaced by even the most secure and sophisticated teleconferencing.

So at what point will this tension break? How will the pressure be relieved? The problem is that there is no definitive breaking point. Every instance of weather-induced flight chaos will be perceived as singular, due partly to media atomisation of any given event, and partly to the individually subjective experience through which these events are processed. As one possible future, the cumulative result will be a further concentration of routes between population centers and the steady pruning of minor spoke routes. The net effect would be to consolidate travel along major corridors, to the point of leaving towns once served directly in an imposed intermodality, under which travelers will have to endure lengthy ground transport to the nearest large airports.

As activists who work towards building broad-based movements, we need to create models for activist cooperation that anticipate these emerging geographies of mobility. While some of us may be privileged enough to experience these pathways of air travel as consumer participants, even as persons who may not travel them either by choice or necessity we must understand the possibilities created for expanded identifications with constituencies that will be linked across not only space, but very particular places defined by emergent or re-emphasized corridors.

Climate chaos will bring people together, but only in very specific relationships of place, and only if we see beyond the re-territorializations wrought by adaptive capital and avail ourselves of the new and reiterated openings produced.