a pause in the action matters

Sara Daleiden alerted me to the opening of Monument, a solo show by lauren woods at University Art Museum at Cal State University Long Beach. A brewing controversy peppered the air, having to do with the dismissal of Kimberli Meyer, the director of the museum, less than a week before the opening. At the end of a 40-minute gallery talk, the artist made a dramatic gesture in solidarity with Meyer, whom she considers a primary collaborator for this project. It was totally worth witnessing. It is not everyday that an artist declares a just-unveiled interactive installation “paused” and walks out of her own opening. 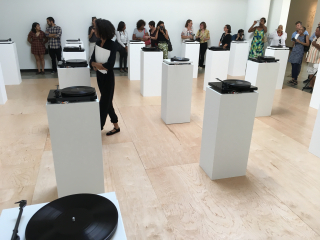 The controversy has been reported on Hyperallergic, ArtNews, and Dallas News with good pictures. Meyer is appealing the termination.

The show is excellent. This is the best artistic treatment of the BLM movement and BLM urgency I’ve yet seen. This is in comparison to Hank Willis Thomas’s Hands Up, Don’t Shoot, and Lauren Halsey’s recent installation for Made in L.A., among others, so I offer it as high praise.

The artist shortly before speaking. 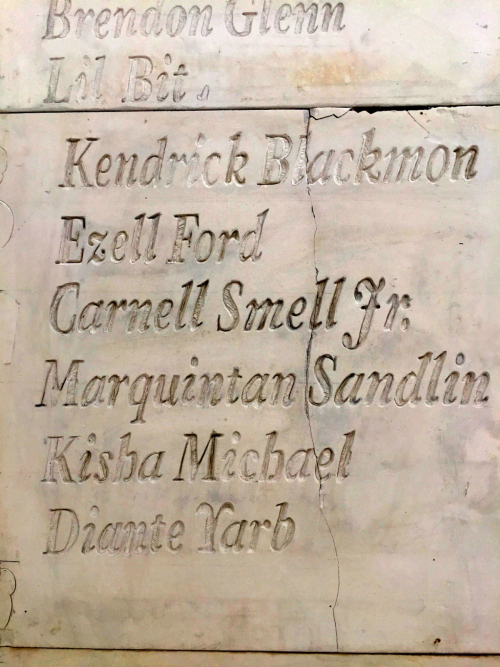 The centerpiece of the show is an arrangement of 25 turntables on pedestals, each loaded with a vinyl pressing of audio documents relating to police killings of African American people. It is true, I am a sucker for vinyl and turntables. But I would say that this installation well exceeded that basic favoritism of mine. On top of the impressive visual display, there is the sound. It makes for haunting listening for anyone with ears connected to the least bit of heart. woods played an excerpt from the cop killing of Philando Castile, one of the most egregious human rights violations caught on a phone in recent memory. The voice of Diamond Reynolds, Castile’s girlfriend and a passenger in the car at the time of the shooting, filled the hall. I’d heard that recording before and just like the first time, it brought to surface a physical response. It was hard to settle my agitation; some in the gallery shed tears. 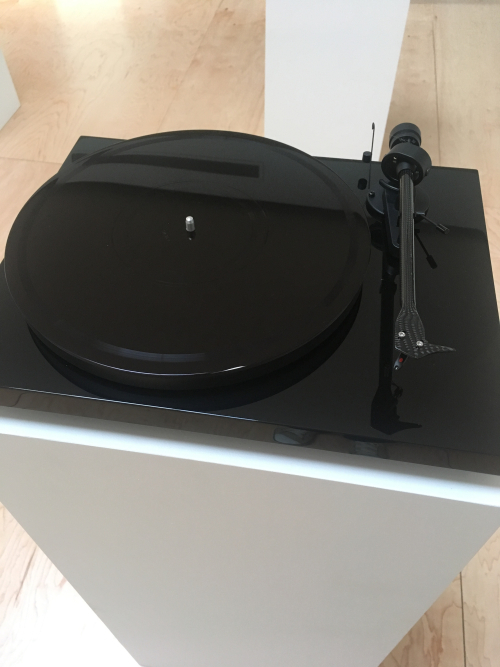 Two side galleries also contained displays, all of them rendering primary documents from incidents of police murder into objects for aesthetic consideration–aesthetic in the sense that Susan Buck-Morss uses the word, i.e. in opposition to the unfeelingness of shock and the everyday anaesthetics of capitalism. woods gives us a enlarged graphic reproductions of the coroner’s diagram marking the sixteen bullet holes riddling the body of young Laquan MacDonald, from head to thigh. She presents printed transcripts from the incidents beautifully stored in metal boxes on tables measured to lengths matching distances specified in case law justifying police fear of “suspects”–which is to say, of course, just about any African American person engaged in just about any activity. Together with the central installation, the show is an emotional wringer, a work of collected trauma that undoubtedly tested the resolve of the artist, and an indictment of a national shame. 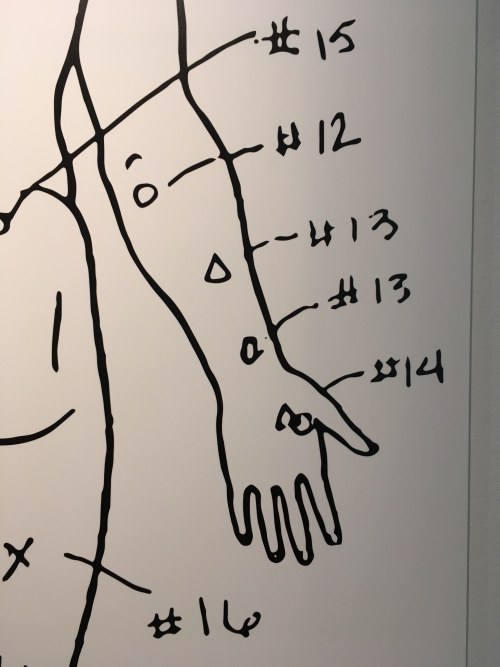 Detail of graphic appropriated from coroner's report on Laquan MacDonald. 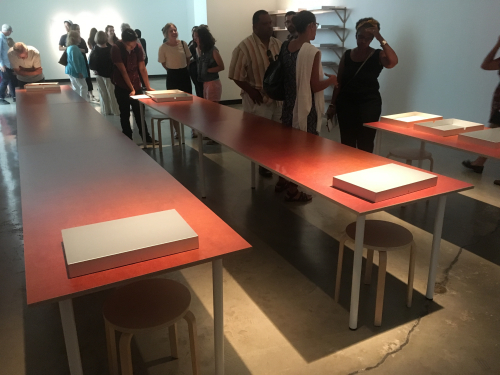 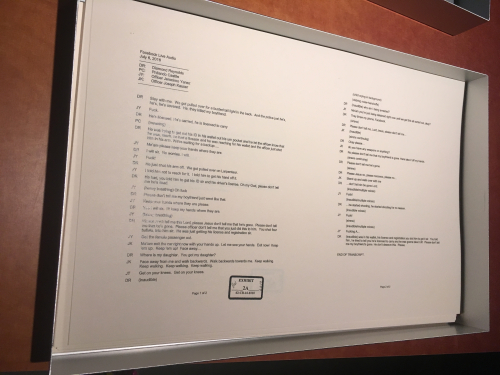 I also read the Hyperallergic account on the quashing of the proposed feature whereby audio would be broadcast outside the museum. I didn’t miss it. I think the artist is already successfully walking a fine line. Organizing documents of traumatic racist violence and re-presenting them in ways that create physical and mental space for absorbing them anew, and in ways that put the discrete incidents in relation to each other, is the strength of the show. And to do it all with such attention to detail is quite admirable and, I would say, a big service to the ongoing need for careful political analysis—a need, just like careful art making, that runs counter to the immediacies of crises. Putting the audio out in the public air for unsuspecting passersby…ah, I am not sure that would perform the same service. As I am imagining it, that would more likely fall into a recursive strategy, i.e. taking a traumatic document and calling it art without a lot of evident organization. Even if there were thought and labor put into the editing, sequencing, etc. (which there might not have been, given the suggestion that the audio was to have been directly channeled from the turntables as played randomly by gallery goers), but that part of the work wouldn’t be readily available for interpretation—in contrast to the gallery arrangement of turntables, wherein the arrangement decisions are very evident, as an essential part of the work, as much as the raw documentation. A broadcast of the audio—again, only as I am imagining it—might smack more of Christoph Büchel’s proposed treatment of the prototyped border security walls: display them as is, and justify it as art for reasons of historical preservation, but make no accomodation for the mixed messages upon reception. This is a long way of saying, no matter the administration’s meddling with the artist’s intentions, as a viewer I did not miss anything for the absence of the outdoor audio. The show was plenty powerful without it.

In the reporting about the controversy, in many places it has been said that Meyer’s declared agenda was to address white supremacy and the museum’s role in both upholding and dismantling it. I hate to be critical at this moment of personal upheaval, but if those reports are accurate, then I must say, I find politics reduced to stances against white supremacy disheartening. I have many reasons for this, chief among them, an analytical lens of white supremacy simply leaves out too many other factors. This is not to flatten all regressive vectors into equivalent forces, but it is to say that they are all intertwined. Race or class or gender–to speak only of the Holy Trinity of Difference–make for primary antagonisms in different situations, and reinforce (or contradict) each other in different ways, both at micro and broad, historical scales; this is something we all know. A reduction to any one, particularly that of race, in my estimation and experience often clouds political intent with distractions like virtue-signaling and conversation-halting moralism. Let’s just say that, like Asad Haider lays out in Mistaken Identity, I find more of value in the late phase Amiri Baraka than in the current Frank Wilderson. Guilt-mongering by calling out white privilege is a pseudo-politics. That said, let me emphasize that I have no way to judge Meyer’s politics except as has been reported; I will grant her the benefit of the doubt and assume that she has a complex and nuanced analysis of power that is not being told. Facilitating a project like Monument certainly speaks well of her courage as a curator.

The firing, by appearances at least, falls into the over-determined pattern of tone-deaf administrations that create mediagenic controversies while ostensibly seeking to avoid them. If the administration wishes for everything “to be centered around art,” as quoted in the Hyperallergic article, then maybe those decision makers ought to liberate the art from such bone-headed interventions as firing the director days before a major opening.

The exhibition remains paused; the audio has gone silent for the time being. I can only hope that the museum and university resolve the disputed firing so that more people will be able to fully experience this important work. Our growth in political thinking–and feeling–to match the ongoing crisis in police violence, extremist racism, and rising violence in general, depends on shows like this one.