A few years ago I participated in an eight-day “social justice leadership training” retreat offered by the Rockwood Institute, divided into two sessions over two long weekends a couple months apart. Though there were the expected trust games, ice-breakers, and listening exercises I was familiar with from years earlier, the training centered Rockwood’s own techniques and lingo. A noteworthy moment came at the very end, just before the gathering broke. Our trainers left us with a word of parting advice. Be careful about your re-entry, we were told. For some people it can be easy to return to their organizations and spout Rockwood methods and terms. For those who have not been through the training, it may sound peculiar or even cultish. This was a good piece of wisdom. 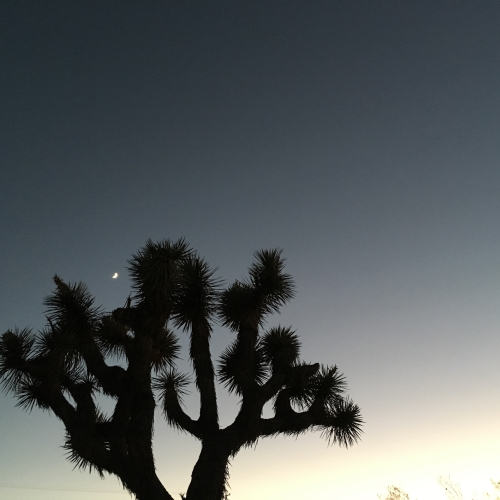 I heard it again four years later, this time from the Against The Stream instructors upon completion of an eight-day meditation course held at the Joshua Tree Retreat Center. As is the ATS style, the advice came in plain speak: upon returning to regular life be cautious about what you share because, really, nobody cares. This is the problem with having experienced something profound or transformative, even in a minor way. One wants to share something about it, partly to help oneself process what they went through and partly because it is simply good news. But taking up oxygen with one’s conversion tale risks turning it into an unwelcome voice of recruitment and proselytization. In other words, just another ego trip.

Offering this report goes against advice. Nevertheless, I feel a responsibility to document my experience for those who fund the program. After all, I was on scholarship. The Hemera Foundation, at least, will care. At a deeper level, putting reflections into writing is a way to acknowledge that analysis and meditation are complementary, not mutually exclusive.1 Finally, perhaps this reflection will reach somebody with the curiosity that I had, people who for whatever reasons of their own are considering paths involving Buddhism and contemplative practice.

Let me describe the course in outline and structure. Since I am but a novice, and on top of that working from memory, I am sure there will be inaccuracies in description. Also, since ATS is somewhat ecumenical in its evolving school of Buddhism (one of my attractions to it), I may mash up concepts originating from different schools of thought. I welcome corrections and suggestions, and beg forgiveness in advance for distortions and omissions.

I think of the course as having been structured in two ways, internally and externally. Internally, there is the structuring of behavior and thought through the adherence to the precepts of “right practice” so as to form sangha, an association of practitioners for the duration of the course. In combination, the dual structure enabled us to open ourselves to insight meditation as it has been traditionally practiced over the centuries. The precepts include a slate of renunciations. They went as follows:

Committing to these precepts—to the point of treading softly to avoid killing insects—released oneself from toxic behaviors and mentalities. Without any of the harm or confusion caused by such simple acts as talking, eating meat, or allowing oneself to fantasize sexually—much less giving in to the cacoethes—a mental structure remained through which a fullness of mind could be cultivated.

The external structure was the daily schedule. The course divided days into repeated sessions of sitting or walking meditation broken only by meals, morning instruction, and evening dharma lectures. Meals were taken in silence. We were each also assigned a camp job, kitchen work and cleaning, mostly. There was an afternoon optional qi gong session for people who needed some low impact body work. These too were performed in silence. Students took shared rooms in either the dorm or the villas. Some paid extra for single occupancy and another contingent saved money by camping. Waking bells were tolled at 6 AM with our morning sitting session beginning at 6:30. Twice over the week, participants were broken into small group meetings with an instructor for verbal check-ins. These 45-minute respites from total silence were either a welcome break or an interruption of the flow. For myself, I appreciated them. They were a chance to momentarily detach from the detachment, to reorient my focus according to a verbal description of my psychological state.

The ATS retreat was not as strict as others I’ve read about. Although spare and monastic in routine, ATS, with its School of the Dharma Punx identity, draws people who are anti-authoritarian by nature; I felt at home among the rule breakers. Also, with over a hundred retreat students, there seemed at all times a few people quietly accomodating themselves according to their own limits. It helped that the only mandatory sessions were the morning instruction and dharma talk.

I found the sitting and walking to require such concentration that for several afternoons I skipped a session in favor of a nap. And once, in favor of a swim. Perhaps thanks to this self-regulation, I never fell victim to the struggle that some novices feel while meditating, that of fighting torpor and drowse. I lost count of how many sittings I performed over the week. It was between thirty and thirty-five. With such intensive practice one is bound to “get somewhere” even if sitting still. Especially, as I learned, if sitting still.

The most meaningful renunciation for me was that imposed by noble silence. Being an artist and writer, there is constant pressure to produce work, to “say something.” With a professional world that bleeds heavily into social media, there is very little space for measured speech, much less silence. Renouncing speech and social interaction immediately cleared space, as is the intended effect with all the renunciations. That space was just as quickly filled by my inner thoughts. Dialogues with myself crowded out inner silence. After several days of practice I learned to return to breath quickly enough to calm the inner noise. It was finally during sitting sessions on the last day that I realized an extended inner silence. Ah, mindfulness—for many years, I realized, I had known no such thing.

Unlike scripted religious services that deliver social but constrained experiences, this course opens doors, doors some of us novices did not even know were there. But little is said about what is inside, only that what one finds is oneself, whatever that is. Or is not, in the event that one goes down the path of confronting emptiness.2 Given our extremely individuated lives in contemporary society, a retreat like this one will be experienced differently for everybody. I expect to experience a future retreat differently yet again, as circumstances both personal and global will have changed between now and then. An important thing to note is, even though I got “better” at meditating every day, my struggles and insights did not occur in linear progression.

To close I present my random notes, jotted either during the retreat or shortly after. 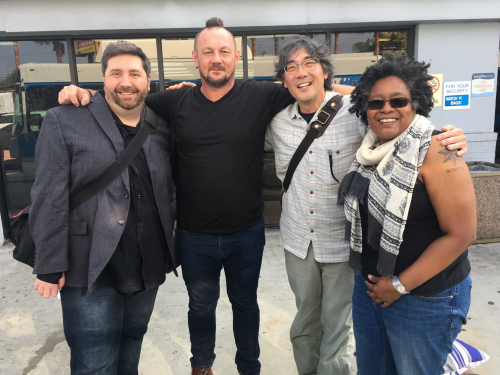 carpool gang upon the return from Joshua Tree to LAX

I post this report with a profound sense of gratitude. Special thanks go to the Hemera Foundation for its visionary Tending Space Fellowship.