« from off the counterculture book shelf | Main | russian hacking: a personal view »

summertime, the political reflections are easy 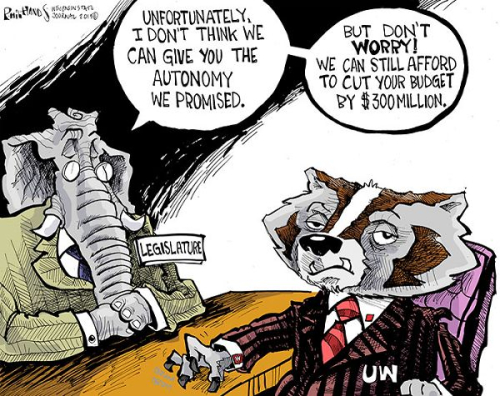 Since reporting on the Wisconsin Uprising as it happened in 2011, I often get asked by friends from other states about the situation here. Now filed away as one of the countless social movements that erupted and then dissipated, it is right that people wonder. Moreover, in viewing the national scene it is impossible to ignore the role of RNC chair Reince Priebus and the outsized prominence of House Speaker Paul Ryan. Whatever is the matter with Wisconsin, it has become the entire country’s problem.

The Wisconsin Question is founded. A lot is going in here, most of it either pretty bad or straight up horrendous. To put it most simply, the all-out assault on the public sphere signaled by the passage of Act 10 five years ago has gone to new levels of implementation and therefore new levels of destruction. Moreover, at this point we can with certainty expect the Republicans to introduce new and even harsher initiatives affecting education, business, infrastructure, and conservation.

The particular targets of GOP attack are many, including the University of Wisconsin System, Wisconsin’s K-12 public schools, and the Government Accountability Board, the state’s long established neutral office of elections oversight. The state’s environmental protections have been rewritten or put under review, including those affecting water quality standards and regulation of CAFOs. Then there is the dismantling of Wisconsin’s state civil service examination and staffing process, along with the implementation of drug-testing of public assistance recipients, and various attacks on matters of reproductive freedom and gender equity.

The litany reviewed above is not an exhaustive account; what I write about here are only the most visible areas of the latest Republican offensive. Each of these assaults has sparked criticism and in some cases a backlash. Each deserves its own analysis and breaking down each front of struggle would require a whole book. Now I focus only on that nearest to me, the attack on the University of Wisconsin, as seen from campus and the city of Madison. Being a complicated collection of interests situated against a city in transition that happens also to be the state capital, the University situation makes for an excellent case study in layered politics and accompanying strategic misconnection.

The assault itself included at least four notable components. They can be grouped as pairs, two general assaults and two targeted attacks. The most concretely impactful of the general assaults is the massive budget cut advanced for the 2015-17 biennium, a draconian denial of public resources justified by a manufactured crisis. Originally proposed as a $300 million cut, Walker played himself off as a compromiser by dropping the figure to “only” $250 million, an 11 percent across the board reduction in state support. Felt by many if not all parts of the university (UW sports and the medical center might be separately managed, for example), the cuts bring austerity to a tangible level affecting thousands.

Also qualifying as an attack on the university as a whole, Walker attempted to rewrite the university’s mission statement. Barely caught by watchdog journalists, the revision would have dropped all reference to the Wisconsin Idea, a credo that constitutes the very heart of the UW’s guiding principle, and replaced it with boilerplate language about career preparedness. When called out on this stealth move—even the Republicans know such a revision would be highly unpopular among ordinary Wisconsinites—Walker backtracked and shrugged it off as a “drafting error,” an explanation recently confirmed as an outright lie by a court-ordered release of the governor’s emails.

Both of these attacks created political liabilities for the Republicans. They dropped the rewrite of the mission statement altogether. The budget passed, but the cut created plenty of bad feeling between the Republican-appointed members of the UW Board of Regents and the campus administrators who are trying to run their schools. Even a few Republican legislators expressed concerns for the effects on campuses in their districts. The lesson here is that broad attacks of the kind that affect a geographically distributed and cross-sectoral swath of the population entail high political risk. Even at the level of higher education—a magnet for Republican accusations of elitism—the University still benefits from the attachment and sense of ownership felt by average residents of the state. In both these cases, the Republicans pursued their agenda in ways that created weaknesses for themselves.

The targeted assaults, on the other hand, mostly strengthened their hand. One of these—a UW System wide tuition freeze slipped into the budget for the same biennium—was less of a frontal attack and more like a gambit, giving something in order to buy time, block an opponent’s move, or divide the opposition. Advertised as the governor’s college affordability plan, this was a straight pander to families of currently enrolled UW students. But imposed at the same time as the drastically reduced state funding, the tuition freeze handcuffs UW administrators from closing the budget chasm produced by the Republicans. The only conclusion is that the Republicans are deliberately choking the University of Wisconsin. And yet because of the short term benefit, the move effectively neutralizes the potential resistance of the students. Plus, nobody can directly advocate for tuition increases without being seen as insensitive to the already difficult debt burden faced by college students today. That some current student leaders have criticized the freeze is a testament to their awareness and foresight. But these have been individual voices expressing disapproval without the wave of a mobilized student constituency.

Finally and most controversially, Walker and the Republicans passed legislation weakening faculty tenure and increasing the power of campus administrators. A new System-wide tenure policy was adopted against prevailing faculty opinion, leaving individual campuses to bring their own rules into alignment with the new policy. Robin Vos and other GOP university-haters slammed faculty tenure as a jobs-for-life deal that the state simpy cannot afford. Walker made hay of unreasonably light faculty workloads and other bogus charges designed to paint faculty as elitist do-nothings. Administrators were again put in the middle. Some of them desire the flexibility to phase out specialized programs and academic departments that attract comparatively small numbers of students or that appear to be trending toward scholarly extinction. That means denying tenure lines and possibly terminating tenured positions. But the administrators are also responsible for maintaining an institution that attracts top research and teaching talent and the institution’s overall stature as encyclopaedic, and that means finding ways to support niche programs. In my opinion, it does mean working with a meaningful but modernized tenure system. Also, it must be said that the administrators, from the chancellors on down, have no job protections at all. This figures into their capacity to maneuver amidst the minefield of faculty discontent and state-imposed austerity.

The attack on tenure was their most masterful play. While provoking resistance expressed in the form of a System-wide wave of faculty senate no-confidence resolutions, the attack fanned the smoldering distrust between faculty and administration. Even more importantly, the move divided students from faculty in terms of respective prime concerns. The Republicans fractured what should be a campus unified as a single constituency. Now the students, faculty, and administration find themselves unable to act in concert. Compare this to the common outrage expressed regarding the attempted erasure of the Wisconsin Idea.

The lesson here is that not all political aggression is of equal value and effect. For the Republicans, launching attacks on targets concerning specific constituencies is better strategically than aiming for targets that provoke broad concern. These kinds of attacks effectively define any resistance as “special interest,” undeserving of broad support. The second pair of Republican attacks successfully foregrounded people’s political identities and priorities as students, as faculty, and as administration—unlike with the first pair, wherein the attacks offended the sense of universal Badgerdom shared by all three constituencies and millions of regular Wisconsinites besides, to the point of forcing the Republicans to back down on the rewriting of the UW mission.

The challenge for the opposition is to enhance identification with and as a broadly collective public while still defending against attacks that most directly affect only certain segments of that public. “An injury to one is an injury to all” is a slogan never more needed, and yet, compared to the heyday of the IWW, American society is vastly more complex in terms of the identity matrices in play. Our groupings, whether externally imposed or self-defined, seem to be unendingly divisible. Diversity has become the basic condition while unity is the elusive construction.

One matter of strategy seems to be clear: an enhanced collective identity will not happen without a rejuvenated vision of it. That is what the Wisconsin Idea was to begin with—a visionary articulation of social unity and mutual responsibility meant to guide the University and the state as they grew into a common future. While Walker’s attempted erasure of the Wisconsin Idea was a foolish miscalculation, the opposition has yet to exact maximum political cost. Perhaps for that to happen a new and expanded Wisconsin Idea needs to be advanced, and it has to come from those caught now in the special interest bind: UW faculty, students, and administrators: End the austerity and renew investment of public funds in public education; tenure for all, including adjunct faculty; free tuition for all Wisconsin students. Make Wisconsin smarter than business, smarter than markets, smarter than the University as it is.