« an oasis unable to grow outside of itself | Main | race and rocky, or i actually went to see creed in the theater »

the city after today, political art after yesterday

The exhibition After Today up now at Gallery 400 has the feel of a Chicago show from ten years ago, in a good way. I could call it a “strategy” or simply a response to a demand—either way, the exhibition space is turned into a platform for playing with ways to see city problems and imagine city solutions, that city being Chicago. And “problems” in this instance mostly being out-of-whack property economics and Chicago’s security-carceral complex. In the familiar Chicago way, the roster of exhibitors is a mix of individuals and groups, and a combination of trained artists, political organizers, and educators.  There are more than ten events planned for the run of the show, including screenings, workshops, performances, and a group bike ride. The displays include a room designed for viewer participation set up by 96 Acres, with tables for drawing and a chalkboard wall; a selection of framed watercolor drawings of titles from the canon of radical lit by Cauleen Smith; a diptych of video documents by Jan Tichy showing a Little Village community event and the once-contested Northerly Island lakefront parkland; a reading alcove with a selection of books assembled from the university library and more.

After Today has the combined sprawl and focused topicality of Pedagogical Factory at the Hyde Park Art Center and Pathogeographies at Gallery 400, both of which were mounted in 2007, and the even earlier exhibitions Critical Mass and Autonomous Territories of Chicago, not to mention the decade-plus of Version fests. In the years since, a discourse has grown to surround the arts of political commitment that make use of participatory forms, to an extent choking politics out of the conversation. Probably the best known frame was provided by Claire Bishop, first disseminated in an Artforum article, “The Social Turn,” published in 2006. Attending to the formalization of social interaction and participation rather than political topics, Bishop interprets work based on form and type and assesses work by identifying the most aesthetically interesting of the type.

Bishop’s negative assessment of the political dimension—often reducible in her estimation to a moralism regulating participation and standards of fair treatment in collective art practices or community-located projects, or the efficacy of an ameliorative intent—de-emphasized any conversation about art as it relates to creative political strategy. In its stead, and with the help of a deterritorialized sphere of discursive venues with national and international profiles, ie comparatively less anchored to a specific place, “social practice” emerged. The Chicago shows of the early 2000s stand as proof of an opposing discursive grain and After Today continues in that direction. This show grants zero attention to concerns of genre or type, and to my great relief, the term social practice is nowhere to be seen. Rather, the show is framed as an occasion to consider

“...this moment of rapid change and political debate—with increasing income inequality, in the long wake of the 2008 recession, as neighborhoods across the city continue to transform, with the rise of labor movements, as the tech sector expands in Chicago, with the transformations of Chicago’s public sector, as wider attention is paid to police violence, and given the long story of race in the city.”

Directly put, the show is about the present and future of the contested polis under conditions shaped by massively concentrated capital, an ever-broader security state, and worsening social inequity. Recognizing that these trends are a legitimately urgent preoccupation, the gallery has been made into a temporary lab for rendering visible the forces at work, for thinking about effective ways to influence the ongoing transformation of the city, and for sharing ideas with others in a city evolved to keep groups separate. As sociopolitical conditions have taken a turn for the worse, this show feels like a throwback, a re-engagement with a lot of unfinished political work and political thinking. As the critical art group Not An Alternative might say, Goldman Sachs doesn’t care what anybody labels this art. Neither do Stewart and the participating artists.

Not that anybody in the Chicago critical art scene ever did. But the timing of this show has an added significance because the city’s radical art scene from the first decade of the century, influential far beyond only Chicago, is now an object to be historicized, which in the economics of contemporary intellectual activity means an infusion of capital, social and monetary. There will be new courses, new conferences, new publications, and ultimately, new careers (ie further entrenchments in the professional realm, where the two kinds of capital intersect). And established reputations have a opportunity to be freshly reinforced, as in the case of last fall’s Sullivan Galleries show A Proximity of Consciousness. An extravaganza comprising the exhibition, the impressive five-volume Chicago Social Practice History series, and the accompanying symposium A Lived Practice, this was the chief effort thus far to package the history and it cemented the authority of Mary Jane Jacob, the curator who oversaw the whole.

Thus, After Today also stands as a refusal to historicize and thereby reify a type of art (“social practice”) belonging to a place (“Chicago social practice”). So the show works as a counter primarily to A) the forces of capital reshaping the city as an exclusionary territory, and secondarily to B) the forces of capital reshaping art discourse as zones of fixed types that now include much of the work born of the struggle to make Chicago livable for its residents. The works on display are presented as strategic intrusions into the wider civic sphere. Amanda Williams’s installed photo-text, in part made of a demolition order scaled larger than a print of a condemned building in Chicago’s tough-break cityscape, frontally addresses the real estate crisis grinding through the neighborhoods. 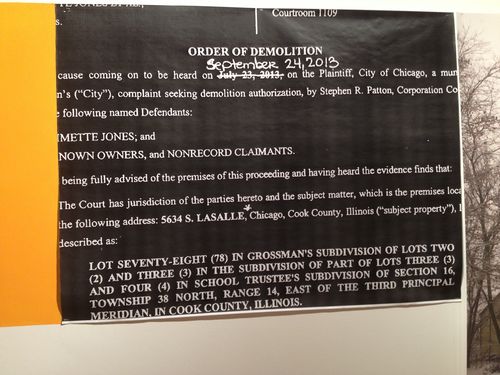 The display says this is what is going on; this is a snapshot of the process of disinvestment. That these images could have been captured in hundreds of cities and small towns across the Midwest deepens the wound a viewer feels, too real to indulge the faded romance of ruin porn. Following the same line of distress, Marianne Fairbanks (with whom I once shared labors as Mess Hall keyholders) presents arrangements of dyes-as-documentation, in fiber works and a window arrangement of dye jars. She sourced the dye-releasing plants from overgrown lawns around vacant homes in foreclosure in the fast changing northwest barrio, giving color to the process of displacement. 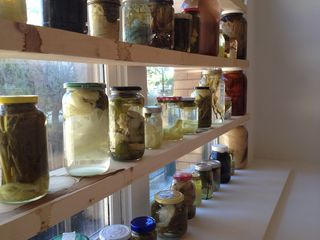 The installation attributed to 96 Acres, a project series led by Maria Gaspar, invites people to hand write on prepared note cards and a chalk wall for free versing words and thoughts, all with a mind toward the Cook County Jail in particular and incarceration generally. On the third wall of the alcove is a grid of portraits produced by William Estrada, Anthony Rea, and Erica Brooks, documenting the impromptu thoughts of passers-by regarding Cook County Jail, encountered across the street from that facility (and to which the project title 96 Acres refers, that being the spatial footprint of the jail). The set-up has the coziness of a seminar room, and reminded me that the whole show defies spectacularized scale, very much to its benefit. Finally, in a most experientially intimate, spatially non-existent move—and harkening back to DIY methods from a pre-Web 2.0 era—Gallery 400 invites viewers to contribute responses and feedback by phone. Written and recorded voice responses are shared here. In sum, to me the show re-asserts the sited political thinking that frequently made Chicago art of the 2000s so fierce. With the forces of enclosure moving toward an extreme within urban spaces and within the rarified activity of art discourse and interpretation, I love that Gallery 400, as a non-commercial space administered as part of a public institution, continues to meet the demand for spaces in which to explore, strengthen, and rehearse our sense of citizenship, of belonging to a city and a society. Resisting monumentalization, After Today enlivens a medium-sized gallery and returns political art to rumors of a show. My one suggestion for the future is to facilitate works that problematize our inherited understandings of what regional and global spaces, and therefore what people, belong to or may lay a claim on Chicago. 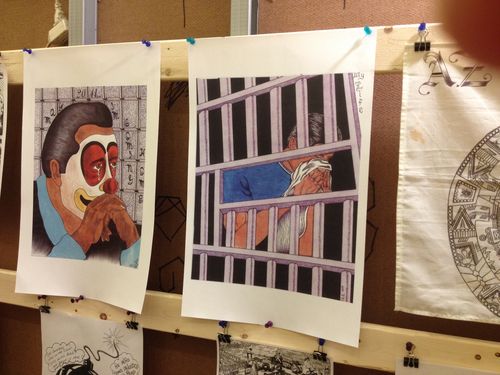 For the predictable but nonetheless important questions about political efficacy and the relationship between art projects and actual political organizing and activist labor that necessarily follow viewing After Today, the just-closed exhibition Sentenced: Architecture & Human Rights picked up where After Today leaves off. I was lucky to see that show on the evening of its closing reception, June 23—the date chosen for its number, signifying the 23.5 hours per day that solitary confinement inmates in the US are kept in their cages. Without full description or analysis, I will only say that the exhibition went beyond symbolism, exposure, and education only. In fact, at the reception it was announced by public interest attorney Alan Mills to cheers that on the very next day the Uptown People’s Law Center would be filing a class-action lawsuit to force a reform of Illinois’s solitary incarceration practices.

So was it an organizers’ social event? An indoor political rally? An exhibition reception? It was all of those things at once.