rest in power and for the rest of us

General Baker, Ernesto Laclau, Maya Angelou. Sam Greenlee. Lately Yuri Kochiyama and most recently Ruby Dee. The ranks of the movement ancestors grow by the week. As I write, I wonder who of the radical generation’s s/heroes will make for an earthly exit next?

As we accelerate into a remaining decade’s worth of fiftieth anniversary observances, those faces of the Sixties who have managed to survive into elderhood will pass with regularity from here on out. That is what it felt like when the world rolled through all the WWII 50th anniversaries. The commemorations were also an extended elegy to the passing of a generation.

As for the rest of us, we really are the ones we have been waiting for, simply because we are the ones who remain. So it  is, the surprising turn of time, for generations ascending a new position vacated from above and pushed into from below.

In my boxes of old letters I found a nearly twenty year-old note from by Yuri Kochiyama concerning the wrongfully convicted worker David Wong. The letter gives a feel for what an experienced and enthusiastic organizer Yuri was, reaching out to people one by one. Shortly after receiving this I learned of Yuri's long history and of her association with Malcolm X. The postscript is pretty funny. The scribbles at the bottom are from when I grabbed a pen and tested its flow on the nearest paper, probably to take a message while on the phone. It is a habit. 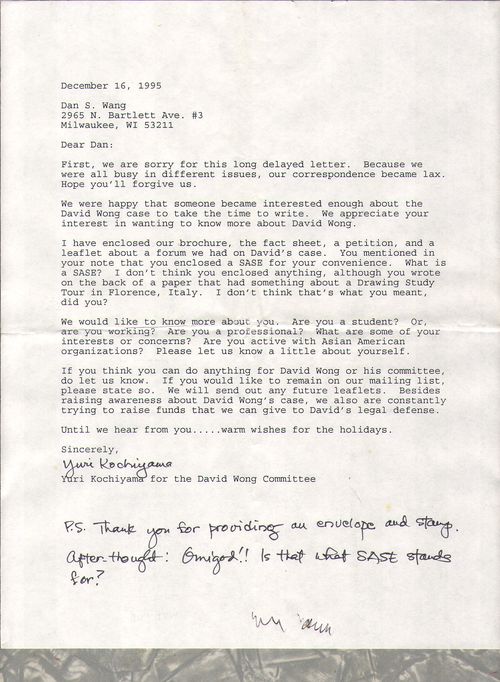 She included with the letter blank petition sheets and leaflets for events. One event was titled The David Wong Case: a forum on the history and political issues held at Art In General. Another leaflet carries an excellent summation of the case on one side and on the other a notice for a "luncheon" event at the Asian American Writers' Workshop. 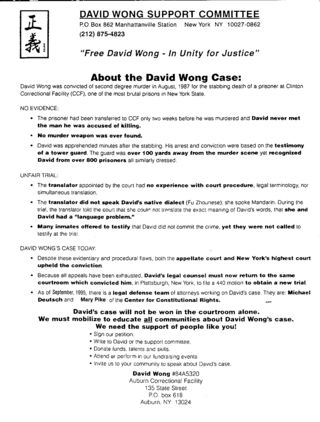 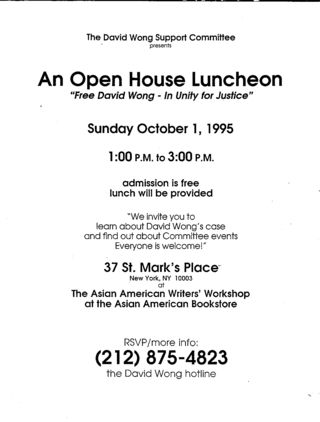 Being what is conveniently called a Gen X-er, my political education leaned heavily on the half generation ahead of me, those of Baby Boomer age. As they finished with their formal, political, and cultural educations and the Seventies wore on, young people joined the general workforce, many of them as educators. Education underwent a mutually tempering dynamic. The idealism of new teachers whose values were forged in the struggles and social shifts of their youth met with the rigidity and structural dysfunction of the institution. If cynicism crept ever more surely into the attitudes of the teachers who had entered the job with invincible belief, the distortion went both ways. The institution was softened, classroom by classroom. People of my age benefitted. In our childhoods we had adult role models who were halfway closer to me in age than were my parents. Going into my teens I related to them like older cousins or young aunts and uncles. They spoke a culturally familiar language but came of age before my consciousness arose. They owned a counterculture by producing it, whereas I came to claim it by studying it.

What Boomers and Gen X-ers have in common is the homogeneity of generational experience. Millenials, by contrast, can be broken down into a plethora of sub-groupings, subcultures, extremes of privileged or disadvantaged experience, and even different generational lineage—in the Millenial generation there are quite commonly persons of the same age for whom one set of parents are Boomers, another Gen X-ers, and another early Millenials, kids having kids. All social spectra are wider, the menu of consumable culture is as vast and as flat as the culture-scape of YouTube, the matrices of identity are endlessly fluid, and the scale of the world’s problems are unprecedented. As the last of the Civil Rights s/heroes fade—perhaps the final generational upholders of an old-skool reverential dignity, so foreign to most who were raised in the age of irony—I wonder about taking a seat as an elder in the future in relation to the youth of today, for whom a generational identity may no longer make sense.

I see comrades a generational rung above me move into their top steps and I feel my childhood finally slipping away. This is the pre-death, the warm-up for the final act in the mortality plays we are all fated to perform.

Of the recently departed radicals, the closest to me was my artist hang-out pal David McLimans. He was an illustrator living in Madison with a talent for making political commentary come to graphic life. He lived the narrative of his time—he went from an outstate Wisconsin youth to a go in the military in the Vietnam era. Incapable of getting with the imperial mission, Dave went disciplinarily limp, passively forcing the Navy to discharge him. From there it was back to the land, settling a corner of the Driftless Area with a group of lifelong partners in idealism who have hearts for the non-human world. By the time I met him, Dave had been making it as an independent artist for many years. Though less well-known than the folks listed above, nonetheless Dave probably reached considerably more people through his prolific graphic contributions to national op-ed pages and magazines, and through his acclaimed environmentally-themed children’s books.

I came to know Dave in the last four years, spending frequent Thursday nights in the company of an artist brotherhood simply referred to as The Lodge, of which Dave was a beloved member. Lodge discussions usually hover around current events, political rants, and field reports so I only saw Dave’s work on the occasional non-Lodge visit. Usually I would interrupt him working at his desk in the front room of his International Style house. He would talk me through the various in-progress designs of cut paper and maybe complain about feeling rusty in the hand after weeks of screen time. Having to shake off the stiffness is something I can relate to, but even at my most dexterous I have never had the evident hand skills that he did. He was truly gifted.

Part of living means moving ever closer to death. For artists, builders, and other people who make things, one’s creations usually outlive the maker. Inanimate objects and material artifacts last many times the length of a human life. Artists live in a kind of dual space-time, being trapped in our perishable bodies but putting our life energies into the careful creation of things that will be around long after. Dave seemed to stretch in both directions of this paradox, thinking through in his creativity the ephemeral and the permanent. He produced hundreds of images for the fleeting attentions of the daily newspaper reader. But he also assembled dozens of sculptures out of found materials resistant to disintegration—bits of detritus with no meaning other than as eternal trash, to which he granted renewed life as art, decoration, and ritual object. Dave, gone before he could fully inhabit his elderhood, created art for a globe that unceasingly spins a new day somewhere at every instant, as well as for the world to be, when humans stop counting days.

These scans are of Dave’s spreads included in the book Graphic: Inside the Sketchbooks of the World's Great Graphic Designers. 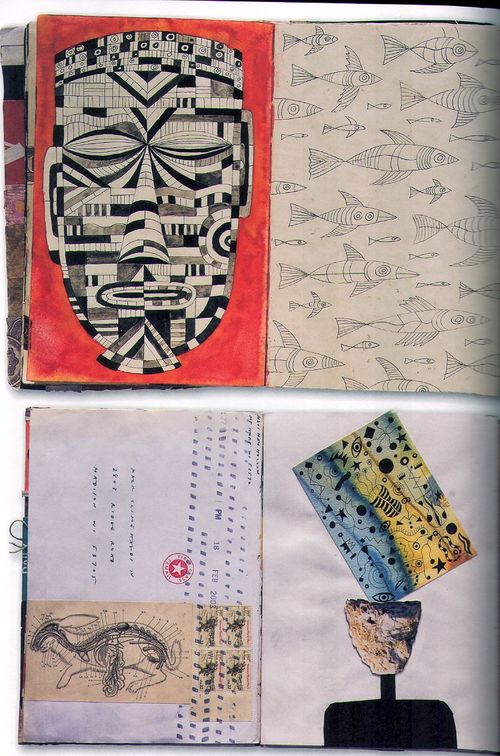 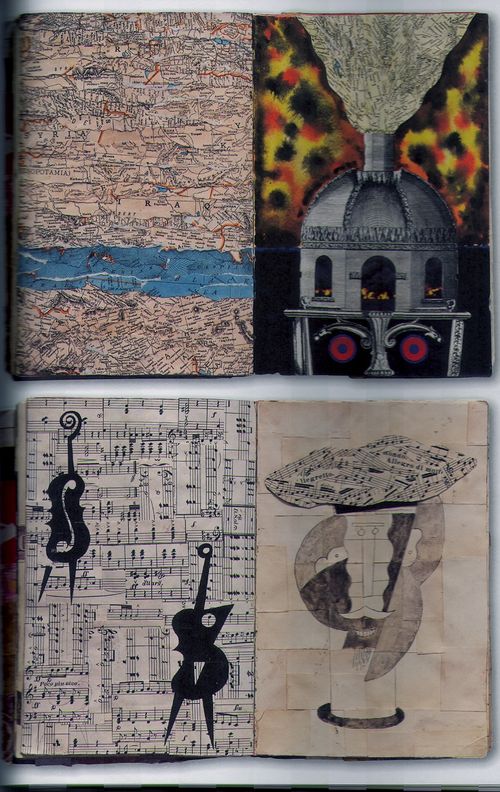