I walked the 100 block of State Street some weeks ago and something didn’t feel right. I stopped and looked the storefronts up and down. It was gone. Ian’s on State was gone. I guess the WI Uprising—the social movement that lived on Ian’s pizza—is really over.

Not it is not. Ian’s, that is. I didn’t know they had moved across the street. As for the movement, it is going into hibernation, if you can call sleeping on a hair trigger hibernation.

In spring of 2009 the print media artists’ cooperative Justseeds opened a large-scale graphic art installation in the Union Art Gallery of UWM. I noted back then that the installation Which Side Are You On? was one of the most effective uses I had seen of an exceptionally difficult exhibition space. A cavernous zone with an odd foot print, the suffocating concrete architecture of the Union Art Gallery normally washes over whatever feeling emanates from the work on display. In that takeover, Justseeds did not merely tame the space, they bent it to their will.

In March of 2013 Justseeds does it again, only better than the first time. Compared to the earlier project the new installation, Uprisings: Images of Labor, is edited and simplified, but not in any way compromised or lessened. Elements have been reduced, formats unified, and the stylistically diverse design work, typography, and handworked imagery allowed full visibility. This time around the group attacks the walls neither as aggressively nor as freely as they did four years ago, but instead grabs attention through an aerial hanging of numerous but repeating forty-inch screen prints. 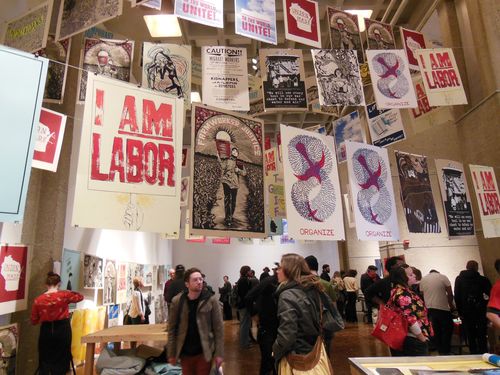 The multi-point messaging effectively broadens our ideas of what qualifies or defines itself as a labor struggle. At floor level the installation is a village of Justseeds activity and production—tables for blocks and brayers, books for sale (including, I was happy to see, a short stack of Deep Routes), small prints and publications on display, pulp vats and floor tarps for a papermaking station, and other stuff I didn’t get around to scrutinizing. 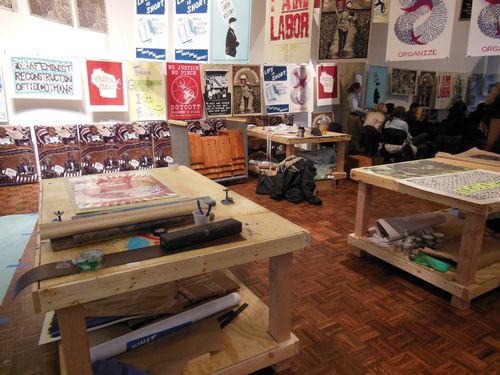 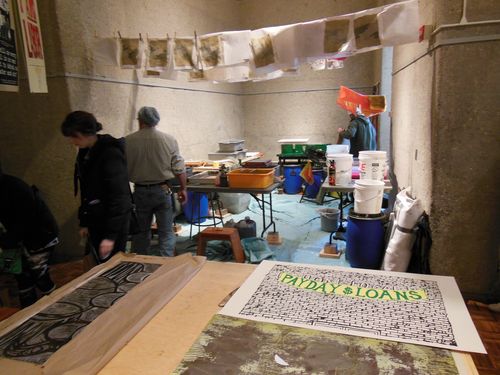 What is interesting to me is taking the two shows as a measure of time in social movement terms. Picture a line beginning in March of 2009 and ending in March 2013, with March 2011 in the center. The Tunisian and Egyptian revolutions and Arab Spring, the Wisconsin Uprising, the movement of indignados, Occupy Wall Street, and other insurgent flare-ups happened over the year halfway between the time of the two shows. In 2013, it makes some sense, in fact, to think of the current installation not as a “show” but an occupation. Not comparable to 2011’s actual social movement occupations of political space, obviously, I am speaking rather of a functional gesture and/or metaphorical act that extends the dream of those beautiful, frightening, and exhilarating occupations of 2011—events that currently sit on the two-years-later cusp of falling into the slow fade of memory.

But Uprisings: Images of Labor is also more than a retrieval of the once-heady feeling of recent movements gone stale, particularly in Justseeds’ strategy of organizing a two-day free conference (shadowing the SGCI academic conference), of which I attended for a half day. 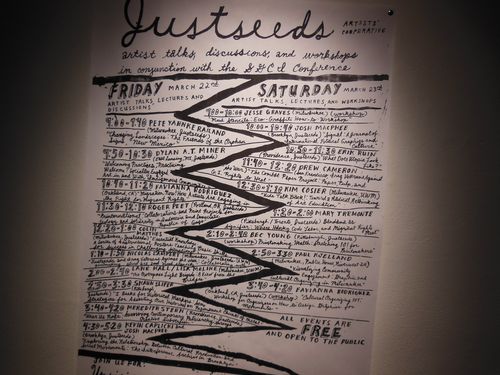 The programming created exactly that which our social movements need now, spaces in which partisans since dispersed by defeats and exhaustion can freshly connect, educate each other, exchange views, and be visible to one another. 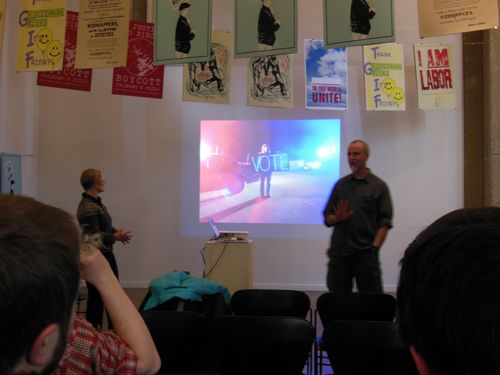 By the time we had an intense twenty-minute audience discussion about feminist politics, feminist process, and feminist criticality following Meredith Stern’s afternoon presentation, a vibe of shared struggle and respectful inquiry settled into the room. 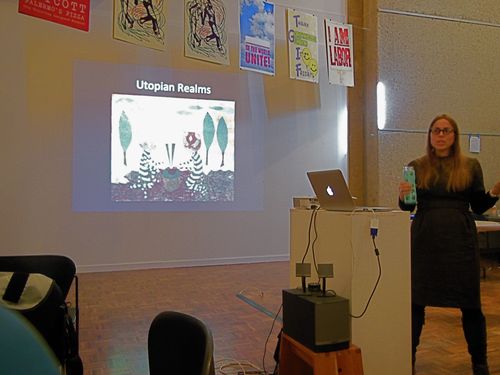 In other words, in an art event Justseeds created temporary conditions for what arose organically during the capitol rotunda occupation in Madison, the occupation of Zuccotti Park, and (on an incomparably huge scale) the occupation of Tahrir: a social forum. After 2011, the constituent elements of social movements are searching for space within which to locate themselves. Justseeds, with special effort by the Milwaukee-based members, has that space for a little while. In as potentially cold a gallery as the Union Art Gallery, this was a feat of social engineering equivalent in spirit to raccooning the birdfeeder. 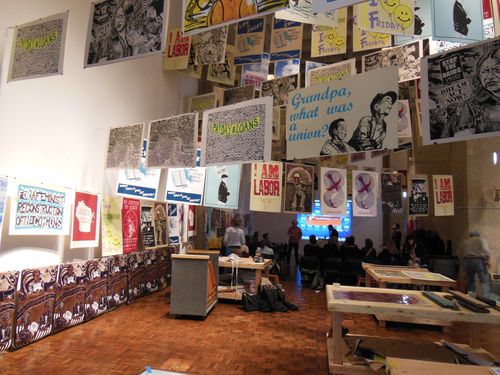 I'd love to study here. Seems like a great place for creative people!