The Fourth of July is as good a day as any to say no matter how unfriendly to immigrants the immigration laws get, the United States is still a country of immigrants. The laws and policies themselves do not change that. Proportionally, the population is now more foreign-born than it has been for decades. Therefore I suppose it is not surprising that the broadside Caution Migrant Workers of Arizona that Nicolas Lampert and I printed up in the spring of 2010 continues finding audiences, now mainly in the form of its enlarged wall-hung gallery version.

The first exhibition for the enlarged piece was in Arizona. Very appropriate, yes. But as familiar as the immigrant narrative is, in some states the story is relatively new, as are the attendant anxieties. For example, parts of the Southeast—for generations the most proportionally native-born region—have seen its Latino population spike over the last decade, bringing in whole new communities, flavors, and sounds to cities and towns across several states. So we are happy to have our piece now on display in North Carolina, at UNC-Greensboro’s Weatherspoon Art Museum, in the very timely exhibition Zone of Contention: The US/Mexico Border.

Here is a gallery shot of the opening from June 16. I am glad to see that a young African American viewer is snapping a digital image of the poster, since the poster is an appropriation of an abolitionist broadside from the 1840s. Our piece was done before the recent Supreme Court ruling upheld the main provision of Arizona’s SB 1070. The meaning of that word CAUTION!! is more weighty now, after the ruling. If anything, the ruling brings the parallel between antebellum and contemporary liberation paranoias even closer. 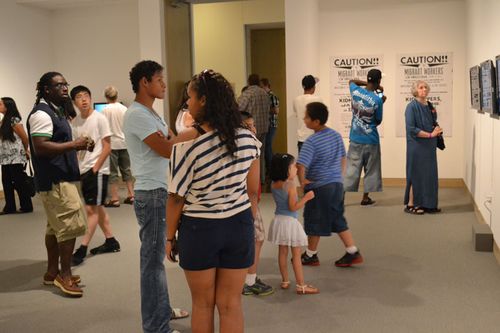 Next up for the piece will be in a show called artWORK, opening in our backyard, at the Crossman Gallery at UW-Whitewater in September.

As Caution Migrant Workers of Arizona circulates, I imagine it intersecting with the circulation of humans. Will there be Salvadoran-born custodian who takes a moment out of her after-hours gallery cleaning to view the piece? Will a South African-born professor take his class to the museum to view the show? At what fleeting points in their circulatory systems do this particular art object and the narrative of human migration become one?

If you want to kick around these questions with the poster in your own home, I remind you that a screen printed version of the poster is still available from Justseeds, as well as the original letterpress printed one.