Before I turn the page on the just-completed spring 2012 semester at Columbia College, I must make mention of the final project work done by my students. The course 22-3254 was called Making Print Media Political, and the last assignment was to produce and disseminate work without traditional authorship. In the course I exposed the students to work that is overtly political in both traditional fine art contexts (typically distinguished by standard authorship), on the one hand, and in a functional, social struggle, or guerrilla context (with authorship de-emphasized or erased altogether), on the other. The idea behind the last assignment was to free the students from the constraints imposed by authored work. They took the assignment to heart and pushed limits in both content and dissemination strategies. I cautioned them properly, outlining what kinds of gray legality govern even the smallest kinds of public dissemination. In fact, one of them ended up in handcuffs while executing his work. He talked his out of trouble, but was forced by Chicago police to give up his documentary images. I gave him full credit.

Overall, the results were impressive. One student who lives by dumpster diving made some wonderful hand-drawn signs to mark his favorite dumpsters, as if they were regular stores. He affixed them to nearby alley fences or on the dumpsters themselves. Another simply accelerated what she’d been doing more or less constantly since last fall: make posters for Occupy Chicago and Occupy Columbia. I critiqued her designs pretty thoroughly but I could not hide my pleasure. And some I could not constructively critique at all. Like this one. It is too good. 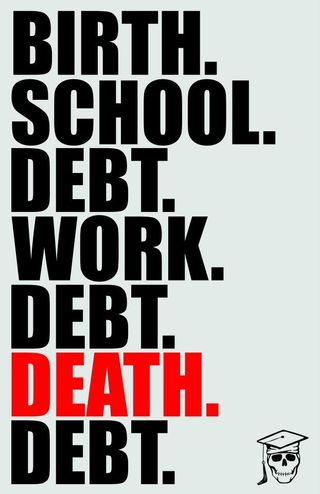 A pair of students made some bookmarks with partial but recognizable images of famous figures on one side and a date with a QR code on the other. The dates and codes lead to online information about what that person had said on that date. The statement is of a surprising or lesser known nature, somehow “political,” and certainly controversial. The students went to two different bookstores, Quimby’s in Wicker Park and a suburban Barnes & Noble. In both settings they made guerrilla placements using your standard reverse-shoplifting technique. Not surprisingly, the Barnes & Noble staff warned them off a few times while Quimby’s workers said nothing.

Several of the more pointed productions are worth showing here. One is this excellent appropriation of Magritte’s The Treachery of Images. The student had been obsessing over the Berlin Conference of 1884, at which the division of the continent by the European powers into defined territories was superimposed upon the many indigenous identities, languages, and generations-long homelands. Divided up without regard to the indigenous groupings, the Berlin Conference bequeathed to the modern nations of Africa a fate fraught with conflict, through broken cultural affinities and inappropriate unities. This work takes Magritte’s jab at the intangibility of representations to another level of futility, that of the tragic and unwanted inheritance. The student produced it as a poster, but we discussed it as a t-shirt. I would buy one. 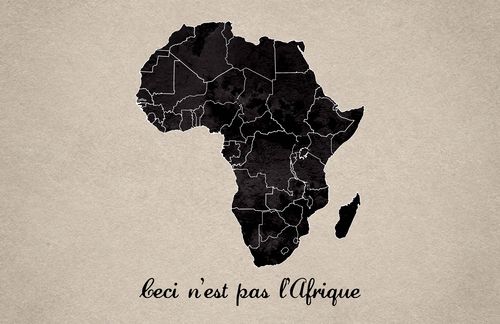 Another student frontally addressed a college controversy surrounding the president of the college. With different campus constituencies applying pressure on the administration all year long—students, both full and part-time faculty, and staffers from various research units from around the college, President Warrick Carter at one point cracked. He very publicly lost his cool during his annual State of the College address, thereby sealing his reputation negatively in the minds of many students. To recall a moment Dr. Carter will never live down, this anonymous project made itself felt at Manifest—a prime occasion for a campus statement. 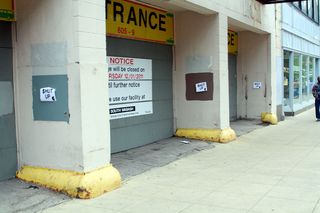 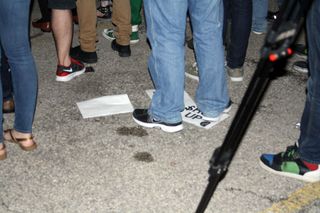 Finally, two students with different projects attacked the advertising on CTA trains. According to the intentions of their respective projects each achieved mixed results. The trains are a tempting venue, but harder to invade than one might think, and at the same time less interactive than one might assume. For the great majority of passengers, the train is about passivity and this can be overlooked in the design of placards that ask for response via Twitter (as one of the projects did). But in an instance of the art making leading to the production of a valuable image despite the unrealized intended outcome, one of them came away with this striking picture. I would have difficulty coming up with a better document of the profound crisis within which we Americans all now simply accept as everyday life—the security/control-society on one side, and the speculative gambling economy, on the other. Both social poisons served up in the bite-sized portion of an individually comprehended and internalized advertisement. A bigger problem, indeed.