How does one teach the art of intervention? This is an important question for more and more teaching artists, if only because so many of the artists who do the kind of work that doesn’t get rewarded by the commercial art market have found spaces of livelihood in the art schools, universities, colleges, and K-12 schools as education labor. But it is more than that. The arts of social engagement (involving every discipline) have opened necessary avenues of practical citizenship and political action. In the visual arts, an area in which a lot of theorizing about and validation of social engagement now goes on, the question feels heavy. The fact that so much art activity these days is about and/or actually involves teaching, learning, and education, adds urgency simply for the fact of the pedagogical mode being put on the aesthetic agenda.

It is against this inquiry that I had an opportunity recently to try out a modest intervention exercise for the students in the class I am teaching right now at Columbia College, 22-3254 Special Topics: Making Print Political. The short description is the students designed and assembled a handsome pack of five stickers and distributed them at a March 19 anti-war panel discussion event unannounced.

I have done projects of a social engagement nature with students in the past, but only as a visiting artist at other schools. This is the first time I had the opportunity to embed such an exercise into one of my own classes. This is how the project came together.

Critical Encounters (or CE) is a year-long campus wide theme and series of inquiries at Columbia College Chicago, around which a faculty fellow coordinates programming, teaching, and academic activity from a variety of disciplines and fields. For the 2011-12 school year the CE theme is Rights, Radicals, + Revolution. A great list of starting point inquiries can be found here. The course I am teaching right now was offered under the auspices of the CE initiative.

The CE initiative also issues small project-based grants to faculty and students to help them realize creative projects during the semester that fall outside of their normal work and specifically is intended to advance the conversation around the CE theme. I was awarded one of these grants to fund a project with my class using commercially produced print media to be disseminated at the March 19 event.

Learning the art of intervention requires the stakes of a real audience, and we were not going to assemble an audience on our own. Piggy-backing on somebody else’s event was the way to go, especially a panel event. Moreover, the panel format practically begs for intervention. Panels are by nature tedious, but boring formats for discussions about peace and social justice issues—ie, about how the world needs to be different—are particularly disheartening. Even if rather unintrusive, adding an unannounced element could only help expand the experience for those in attendance.

More importantly, the timing worked. The successful grantees would only be notified the first week of February, two weeks into the fourteen-week semester. Not knowing until then left me in the position of hedging a simple project against the potentially short time frame for execution. Pushing the completion date out beyond Spring Break would have interfered with the last and most ambitious assignments of the semester; getting something together before then was impossible given the concentrated material I had already planned for the first half of the course. In essence, the CE grant project, if it were to happen, was fated to be a side project within the regular course work. For all these reasons, March 19 made for a convenient target date (the class meets on Mondays). For conceptual reasons, the event lent our project a built-in significance and starting point for interpretation, it marking the ninth anniverary of the 2003 beginning of the Iraq War.

It was an intervention with no name. But it had everything else—a good look and feel, material simplicity, insistent but non-ideological politics, a deserving occasion, and a collaborative spirit. After reviewing ideas, format, material options, and costs, we decided to go with stickers as the medium. We did not discuss the desired outcome of the intervention, but I am not sure that conversation would have been very useful anyway. For one thing, the students are neither fully agreed politically, nor on average fully committed to their positions—they are in midst of political educations. It would be a good exchange, but it would have been premature for the purposes of determining a unified direction. We will discuss outcome in the debriefing.

The stickers were good for breaking up the project into tasks. In addition to creating the graphic designs, performing the on-site distribution, and designing the packet were the main tasks. Some of the students have online channels through which they can share the documentation. Everybody contributed.

Instead of a single clear and explicit message, we went with the idea of an assortment of designs, without stylistic unity, and with an openess to messaging. The design work was split among five students, with each allowed to interpret the meaning of the event openly. The students came up with fifteen designs out of which the entire group decided on a final five for the stickers. I am certainly biased, but I think they are amazing. As a way to take the event's audience and therefore the conversation to places positively beyond the event's announced topics of peace and anti-militarism, the art object was undoubtedly a success. 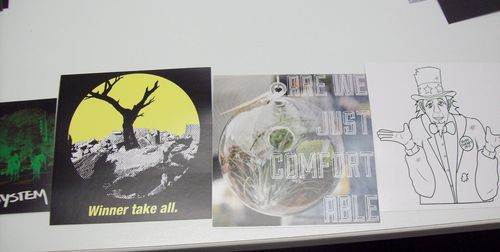 Once the first stage of conceptual conversations were done, I played the role as coordinator, making sure that people stayed observant of the calendar, kept track of the spending, did all the online ordering, and received the finished materials. Here we are, for assembling the packs. 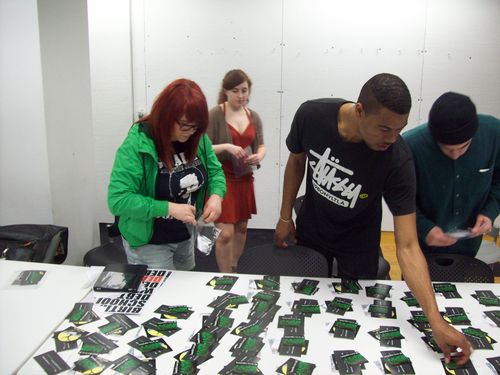 Then a team went to the Cultural Center to distribute and document. We had guesses about the event’s audience, in terms of size and profile, but no certainty until we got there. Turns out it was a small crowd, and worse yet, only two of the four scheduled speakers made it. The event energy was low. Rather than viewing that as a failure, I prefer to think of us as having made the event far more interesting than it would have been otherwise. Here we are, gifting them away.

Here's a dude checking them out. He was decked out in Occupy buttons and carried with him a few copies of an Occupy publication. I think it was the Occupied Chicago Tribune.

The project was an exercise in experiential learning, and was intended to show students how to make something simple but meaningful, using some standard strategies of activist and socially-engaged art. Conceptually, the intent was to put a friendly wrinkle into a politically-informed but fatally unimaginative event. I would say our goal was achieved, even if the bar was set fairly low. But to that end, a spectrum of learning purposes were fulfilled, from the universal lesson of meeting a tight deadline with a quality product, to the accumulation of concrete experience in producing print media art work.

The more complex questions having to do with performative interventions, the aesthetics of what Brian Holmes calls 'event work,' what the institutionalization of activist art bodes, how art interventions might figure in revitalizing a moribund leftist culture, and so forth, remain to be explored. But teaching the art of interventions reproduces presumed values and priorities–even a modest project like ours does this, because of its institutional sponsorship (and attendant taboos), the inequities inherent in a teacher/student arrangement, and many other manifestations of the power structure embedded in the conditions surrounding this project. Given that, I look forward to seeing more critical analysis of such teaching, hopefully beginning with our debriefing.