the dying art of hitchhiking

Traveling the Madison-Chicago expressway corridor is all about routine. Lots of people do it on a regular basis. In other words it can be very boring, as predictable as zipping across concrete at 70 mph can be.

So it was a treat when the other day I picked up a hitchhiker for the first time in quite a few years, as much for me as for him. This man 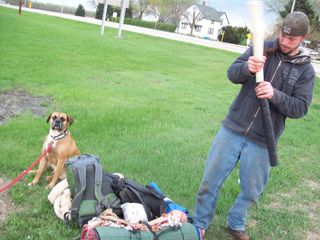 was sitting on the side of the road at an entrance to a South Beloit truck stop with a sign that said I-39 South. He and his dog rode with me for about fifteen miles, to where our temporarily common paths diverged.

It had been years since I had given a lift to a thumb-traveler, mainly because I do not see hitchhikers very often anymore, even though it seems that I drive more frequently than ever. Hitchhiking is a mode of travel that seems to have declined markedly in the last fifteen or twenty years. You would think that with the rise in gas and automobile prices and unemployment among the young we would be seeing an uptick in hitching. But no. These days the culture of Fear, now as American as apple pie, trumps even the once-powerful national longing for adventure and the irresistable draw of a free ride. Instead of hitting the road and exploring this vast land our young men (not sure hitching was ever that imaginable for women) are sitting on couches, scared of what is over the horizon, brave enough only to do battle in make believe video worlds. Do we need any more evidence of the empire in decay?

Turns out this fellow was a brother of the road, a modern day vagabond, what Hunter S. Thompson would have called a Road Person. John was his name, shabby but very polite, looking weary after ten years of hitching and tramping. The story he told me was that he had to reach Missouri to apply for a new ID card, the last state from which he’d had one issued. His wallet had been stolen a year earlier and since then he’d had nothing but trouble finding work and a stable living situation. Even when he could find the work (he had all his construction worker tools with him), he’d have trouble getting hired.

Starting out from Florida at age 21 and now 31, having gone through his young man’s period of deadhead drifting and numerous cross-country sojourns, John was ready to stay put for a while in Green Bay, where he’d found a steady job with a builder friend. He wants to get an apartment of his own but that was all on hold until he could show Somebody Who Matters a proper ID.

We spent our short time together trading thoughts about hitching rides, how things have changed since I hitched a few trips back in the 1980s. Together we bemoned the security state and what it has done to relations between strangers. He said what irks him the most are the strapping clean-cut white dudes driving pick-ups who never stop to let him catch a ride in the box. It would not bother him, he testified, except that he still gets a fair share of rides from little old women driving alone. I said it is ironic, but perhaps unsurprising. Sometimes the people who have the least reason to fear are the most fearful.

John likes to draw. When I dropped him off he took the time to pull out a couple of his drawings, pieced together from notebook paper and rolled for travel. The first he calls Dragon and Harlot, based on an episode from the Book of Revelations. He explained to me that he was scared out of his wild phase through the harsher parts of the Bible. 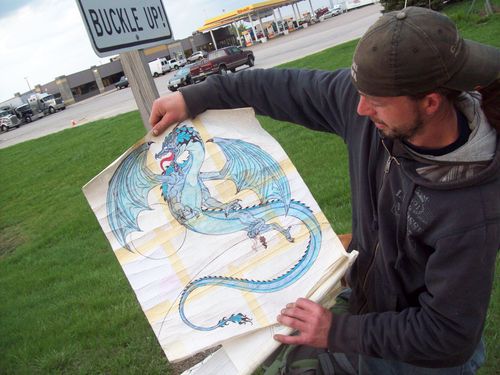 The second is a Sponge Bob Jerry he did as a gift for his niece who is a young, post-Jerry deadhead. Imagine growing up with Jerry Garcia as a departed mythical figure but having Sponge Bob Square Pants as a very present television companion. Considered in that way, I suppose this picture makes sense. 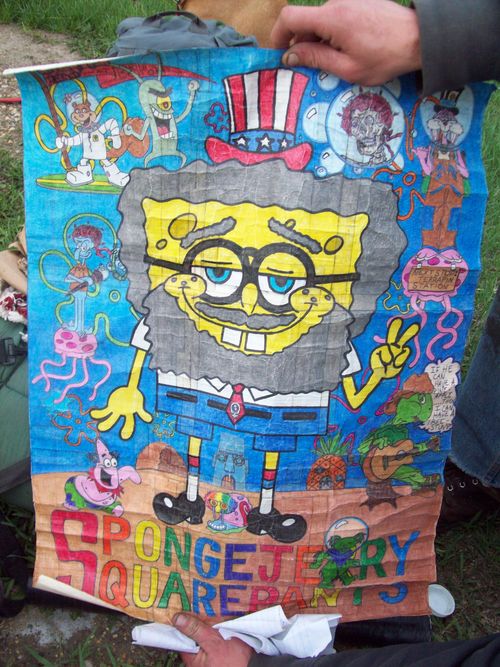 So, where is all that dark matter of cultural production that Greg Sholette talks about? Some of it, at least, is on the side of the road, waiting for a ride. As soon as I pulled away, John went back into an undetectability in relation to me and most of modern America—he has no email address, phone number, street address, or cyberpresence. John is still in that other America, the one I passed through every now and then in younger years, but that has become largely invisible to not only the mainstream, but all of the mediated cultural spheres we live and work in–the art world, academia, creative industries, "alternative scenes." Though I feel for his exhaustion, I am gratified to know that it still exists.

Hitchhiking?! Its the first time I've heard of it. i'm 19 btw. I find it interesting, i wish I could try that hitchhiking thing, though im a girl x)