It was one year ago that the outward ripples of the Tunisian uprising were felt across borders and through unlikely differences in context. One of those places that saw a righteous outrage directed at a local tyrant in early 2011 was Madison, Wisconsin. Beginning on the day Mubarak fell, Wisconsinites opened their Friday after work routine with the surprise announcement that Scott Walker's so-called budget repair bill, set for a vote early the next week, would end the collective bargaining rights of the state's public sector union. As citizens read the fine print, they found that the bill contained other controversial measures, as well, such as a provision to sell off some publicly owned energy facilities on a no-bid basis. A variety of constituencies found reason to mobilize.

Thanks to the grassroots info-activism of individual citizens from all quarters of the state, the rapid circulation of information through social media, and the prevailing global mood of ya basta (and in this sense, Madison has long been a very global town), within a matter of hours our governor crossed the all-important line of perception, going from harmless amateur to despotic, venal, and dangerous egomaniac. Then, as Walker dug in his heels, the movement to criticize, resist, and now to oust him, gained traction through months and months of renewed outrages committed by him and his Republican lieutenants. Right up to, literally, this very moment. As I type this post, the Republican-controlled Assembly are preparing to ram through yet another of their controversial, poorly-written bills. This one would effectively gut Wisconsin's regulatory apparatus that has successfully conserved wetlands across the state, giving in wholesale to the well-financed interests of irresponsible short term wealth-generating development. It would also have the effect of heaping additional unworkable duties on the DNR, setting that agency up for failure. This is a prime example of T.C. Frank's wrecking crew in action.

So at the one-year mark, what does it look like going forward? The many subplots and numerous controversies of the last six months have recently been reduced to three main storylines, each with its own actors, antagonisms, and possible outcomes. Now fully developed as political narratives, how they play out from this point will shape the contours of the Wisconsin movement for at least the first half of 2012 and possibly the second. The three stories are 1) the massive grassroots recall effort and election, 2) the battle over new mining up north, and 3) the ongoing FBI John Doe investigation into illegal activities in Scott Walker’s office when he was Milwaukee County Executive and running for governor in 2010.

The overwhelming enthusiasm of the petition-phase of the recall campaign shocked even the optimists. Gathering over a million signatures means that two of every five would have to be invalidated, an insanely unrealistic prospect, thereby crushing the Republicans' first defense. 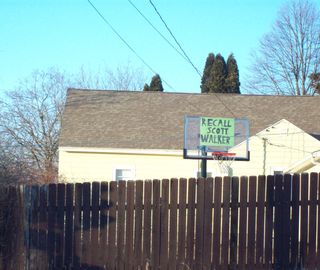 As well, in absolute numbers, the total comes very close to the 1.2 million votes that Walker received in 2010, indicating how widespread the disapproval really is. Most importantly, given the grassroots nature of the recall effort, this contest is being written as a David vs Goliath story, and therefore a possible turning point in electoral strategy beyond this one election. The David (the WI movement, leading the Democrats and not the other way around) and Goliath (Walker, Koch, ALEC, WMC, money, money, money) story, helped along by citizen reporting on the forces organizing behind Walker, has opened this struggle to a possible outcome in keeping with the idealism that has fueled the movement thus far. If the movement capitulates to the conservative tendencies that are already emanating from within the Democratic Party and union leadership, it will have been another opportunity lost.

Up north, anticipating what would be in effect a ground invasion, the tribes and their allies are ready to defend their lands, through the courts, and physically if necessary, in the hills. There are successful treaty rights and environmental defense campaigns within the recent memory of a great many Wisconsin activists; organizers are confident in their abilities to form strong native/settler, urban/rural coalitions and use all tactics, from lobbying and media work to civil disobedience and direct action. The state’s strong environmental constituencies (remember, Wisconsin is the state of Aldo Leopold and Gaylord Nelson) are already on the same page in opposing the proposed new mining, and the strict regulatory regime that ranks Wisconsin one of the states least friendly to mining is a legacy of the victorious grassroots-led anti-mining/land preservation struggles that happened fifteen years ago around the proposed Crandon mine. Are the Republicans really anxious to go to the ground in the face of people who are willing to sacrifice their own lives before seeing the ruin of their land and culture? Are they that foolish? Yes, they are. When the invasion begins and the struggle takes a turn toward the dramatic, if the movement articulates its moral, scientific, and economic positions wisely, the chances are good that in one way or another Scott Walker's image and reputation will take another lasting hit. With any luck it would be politically fatal, career-wise.

And, finally, the drip-drip-drip criminal investigation that has placed a chokehold around Walker's inner circle raises the possibility that the other dogs are willing to cut him loose to save their own future ambitions (remember, Paul Ryan and Reince Priebus have their own delusional plans). Walker has retained a legal team, now that the John Doe investigation has the feds breathing down his neck, and I'm sure even his corporate backers are beginning to formulate their own Plan B. As far as I can tell no arm of the WI movement has a contingency plan should Walker be indicted before a recall election is scheduled, even though at this point it seems like a real possibility. I am not even sure what happens. Is he removed from office? Does an indictment trigger any sort of impeachment process? Or will the state's Republican cabal of the Fitzgeralds, JB Van Hollen, and the David Prosser state supreme court work to protect him? Our theocratic lieutenant governor Rebecca Kleefisch is also the target of the recall campaign, and will likely stand for early election along with Walker. But could there be a situation in which she assumes the office of governor and thereby invalidates her recall? Given the tangled plots and unprecedented nature of this whole thing, the legal minutiae yet to be wrangled over cannot be underestimated. How we, as the grassroots engine of the movement, write this narrative is the question. Above all, we must continue to find ways to keep the stories open enough–through both well-timed political offensives and the attendant shaping of the mediated narrative–for a possible outcome that definitively reduces the present and future power of the regressive forces.

Though a wooden performer in public, we know that through it all Walker's been shaken. He has attempted to spin himself a softer image in recent weeks, miserably, baldly dishonestly, and unsuccessfully. (Playing the compassionate card is not his forte; neither is being honest). But the tone deaf narcissists our careerist political system produces–and Walker is precisely such a product–never really comprehend the message, even if they sense an external threat. Scott Walker is an embodied example of what Debord wrote more than a generation ago: the spectacle is incapable of thinking strategically. And we knew this as early on, when he made a calculated move to play the role of Dairyland Dictator on the very day that Egypt's Mubarak ended his career with a literal escape for his life. Can you say political blind spot?

Blundering his way through, with all the resources that large amounts of cash can buy him, but with none of the kind that don't come with a price tag, Scott Walker now faces a crisis every which way he turns, each one of his own making. Whether Walker realizes it or not, he can never go back. Apart from the hardcore ideologues, his support has evaporated, even as his people lamely manage his deteriorating image and reputation, as exemplified by this sorry effort at staging, and then spinning, a pro-Walker event. It is safe to say Walker's done. Only the ending has yet to be written.

The relevant sign you'll see in this video, shot earlier today at the tail end of the noontime rally (after most of the people left, and before the larger afternoon rally that happened later), is the one held up by the firefighter, first at 3:36 and then at 7:18 with interaction.

And one year ago? Let's remind ourselves of what the mood was. Anxiety, disbelief, and a vague hopefulness in a movement yet to fully blossom, tempered by the depressive expectations of a collective lifetime of cynicism. The video below is from noon on Tuesday, February 15, 2011: the occupation of the Capitol began about fourteen hours after it was recorded. Massive demonstrations went on for weeks afterward, generating a whole culture of activism, resistance, and grassroots leadership. John Nichols' review of notable actors and events is only the very tip of the iceberg.

The movement continues, with arrests of activists being tweeted from the Capitol as I compose this, and the disgraceful dead-of-night passage of the wetlands destruction bill as I edit.