from the archives, our first site specific work

I found this old slide the other day. It is from the spring of 1990. 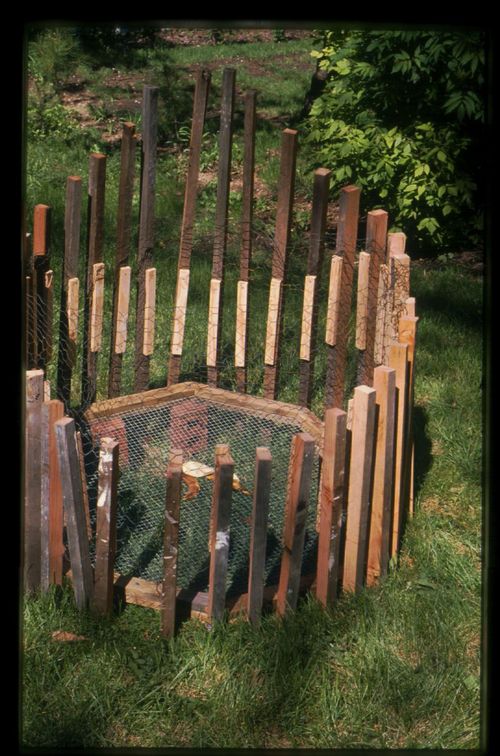 Miyo Kachi, Dan Froehlich, and I were students at the time. We rented the lower flat of a house in Northfield, west of the Cannon River, almost exactly between the two campuses. We (and our frequent guest Sarah Van Orman) called our home Pineapple House.

The house didn't come with a compost bin and the idea of household composting was still kind of a subcultural thing at the time. But we were all former Farmhouse residents, so composting had already become second nature to us. I remember that we can been "saving" our kitchen waste over the cold Minnesota winter, ie collecting it in a can or bucket out back, leaving it frozen until the spring thaws. As it warmed, we had to build a bin for it.

As it happened, Miyo and I were in a sculpture class together that spring. She had scavenged this cyclone fencing material and a clump of chicken wire. So we collaborated on this compost bin project in satisfaction of one of our assignments, the site specific project. We planted the bin on this little slope that ran across the property like the step into a sunken living room, about the only distinguishing feature of the backyard; you can see the brick supports on the back end, keeping the hardware cloth bottom level. For the critique we christened the bin with a banana peel, also visible.

I'm not sure if it was used much–the end of the school year came and we all moved out in a matter a few weeks. But it is funny to see this pic now, before I knew about all the different currents among artists that this project relates to. It just goes to show, often artists find their way to where they are through modest beginnings of intuition and immediate needs, without worrying about the formalities of discourse, art history, and proper theorizing. We had non-academic reasons to be creative. What mattered in this case, and what I am concerned about now even as I look at this image, is how the bin performed. It still strikes me as nice looking and a clever reuse of found materials, especially considering our somewhat limited skills at that time. But obviously it is not going to facilitate a hot compost, or be very convenient for turning.

Maybe Miyo and I could plan on designing an improved version for the project's 2015 25th anniversary.