« from wisconsin, on OWS and post-democracy | Main | the getaway that left questions »

“What’s going on in this country, it’s fascism, simple as that.”

The stranger who spoke those words to me had not attended and did not even know about the Saturday noontime rally on Capitol Square, at which there was an estimated crowd of 40,000 celebrating the recently launched campaign to recall Wisconsin governor Scott Walker. On the square the spirits were high, and the consciousness evident. This was the massive and genuinely popular Wisconsin movement, again visibly churning to life. But the critical pronouncment above came neither from the rally stage nor from any of the scores of petition-gathering volunteers, nor from a protest sign. It came later that evening, from the mouth of the guy in his early 50s sitting next to me at the Furthur show.

“The people are distracted by this bullshit corporate media, which is all lies and pure bullshit. What’s that show, Three Men and a Half, or some shit. Fuckin’ bullshit. And in the meantime the rich are putting up a police state, and nobody fuckin’ notices. They’re defunding schools, keeping people stupid. It’s fascism!”

This man was pissed, possibly in despair, but clear-sighted. When I asked him what he did for a living, he admitted embarrassment and then proceeded to tell me all about the new gold rush of the Bakken oil fields of North Dakota, where he has been working as a contractor for six months at a time. He was embarrassed because, as he put it, “It’s a goddam free for all out there, 4 billion barrels of recoverable oil, maybe more, with no consideration for any kind of environmental responsibility. And it’s insulated. You don’t see any big oil company that you’d recognize. Only Halliburton, and a lot of companies like Halliburton that nobody’s every heard of. It’s fucked up. I hate it.”

And right then the band went into Throwing Stones.

Picture a bright blue ball, just spinning, spinnin free,
Dizzy with eternity.
Paint it with a skin of sky,
Brush in some clouds and sea,
Call it home for you and me.

This encounter did not happen at a political rally. Or did it? I spent $110 on two Furthur shows this weekend, outside Chicago and in Madison. Very un-critical art of me. Not radical.

Not because the boys opened the party with a raging Sugar Magnolia and Chimenti wailed the keys on a tightly shuffling Stagger Lee in Friday’s first set, or because they hit the euphoric passages of The Eleven and St. Stephen with full, thunderous volume in the second set. And not because they offered up favorite cover Just Like Tom Thumb’s Blues in Saturday night’s first set, or because the band pummeled Viola Lee Blues and Bobby crushed the vocals on Death Don’t Have No Mercy in the second set.

Those are some of the reasons the shows were excellent for Deadheads, something I most certainly am. But these nights were not merely about Dead fandom. They were about an old counterculture meeting a new moment of economic and cultural upheavel.

The thoughts that came to me during the shows had to do with if and how those nights connected with the times of the heterogenous psychedelic counterculture before “Deadhead” gained meaning as a defined subcultural identity, and which had emerged visibly already by the early and mid-70s. Having come into the scene in the age of the mega-Dead (from 1987 on—basically the years after Garcia’s diabetic coma), aesthetically speaking the ur-mythical early days had always felt rather remote, even with Captain Trips on stage. By then the concert experiences had become packaged and predictable, all the more so for having attained the status of a major concert draw. By the 90s, the band was falling apart in terms of internal communication and the concert experience ran on the fumes of cliches. I had tickets to two shows at The Palace in Auburn Hills, Michigan, in 1992. The first show was so flat that my friend and I gave our tickets to the second show to some “miracle”-seeking fans, who looked extra-pathetic given the sorry performance they were dying to see.

By contrast, the Furthur shows of this past weekend were meaningful on an intellectual and aesthetic level I have never felt before. The shows were great because they gave me time, space, and stimulation to think—and feel—through the political sensations of our day. To really stop and wonder about this cultural moment in America, in so many ways seeming to be on the edge of a cliff—or, more promisingly, on the take-off edge of a growth spurt of a kind. That Furthur remains a direct link to some of the most important American cultural experiments of the Sixties—open-ended, bravely good humored, at once literati and working class, astonishingly amateur, and selectively provincial—figured importantly in the experience.

My musing began with the questions, what does it mean for a few thousand people to gather for an evening party, many of them wigged out on mushrooms, Ecstasy, or acid, plus copious amounts of grass, shaking to music supplied by a fresh-sounding and expertly performing outfit directly descended from the original house band for the Acid Tests of forty-six years ago? What does it mean for this event to be happening in a time of unrest, persistent economic crisis, and a general deep questioning of values? Can a form of hedonistic revelry borne out of a turbulent and revolutionary time from a generation and a half ago maintain purchase on a measure of meaning that goes beyond a consumer experience—and maybe even opens doors to new pleasures and, therefore, desires? What are the changed structural circumstances, from then to now, that might limit the reach of the experience, or re-inscribe fresh meanings?

The discontents and desires out there, products of a generalized injustice, so personally felt and expressed in the America of 2011, had me reaching for the poignancy of forty year-old lyrics, my ears pulling them out of the mix. See the romantic indignation of Hunter’s losers and wharf rats.

Measured in pure pleasure, the Rosemont show was the better of the two. It was a happy crowd, ready for a high energy party. The first set put us on notice. The band was tight. The unusually coherent second set, full of high points and seamless transitions, took me to the recordings of the early Seventies, the mindfully groovey playing I never got to hear in the late Grateful Dead. I could only think, so this is what this music is supposed to feel like. Music sung to the hassled longhairs of 1969, newly resonant in the contested space that is brutalized Occupy America, 2011. A basic message we can all relate to, from Ron Paul supporters to the drummers of Zucotti, and everbody who has been hassled post 9/11—which is to say, everybody. Get off our backs. Let us be. Stop telling us what to do.

I want to find my own way home

I expected the Madison show to have some discernible political vibe, simply because of the setting—there were sure to be recall campaign volunteers out, fans with buttons and Wisconsin solidarity t-shirts on. Appropriately, the music was darker than the previous night’s jolly ride, more bluesy, sadder songs, and hard driving rock. Less ecstatic.

Saturday night’s message seemed to be that nowadays, we are losers, all of us. But we can wallow together if we are fortunate enough to escape the various wars (dodging the draft then, evading the creditors now), score a ticket and a ride. And for an evening at least, a diversion of mind and body that might be more than only a diversion, with the right dosage and preparation, can still be had.

It used to be said that the Grateful Dead weren’t the best at what they do, they were they only ones who do what they do. That is no longer true, and hasn’t been for quite some time. The second generation jam bands, not to mention the modern psychedelia of techno tribes and orchestral pop, reached maturity long ago. Now the kids have a lot of choices. Consequently, the Madison show wasn’t a sellout. Not even close. The upper sections were were sparsely attended, mostly with people who wanted lots of space to “white person wiggle,” as Jim DeRogatis would say. But the floor was another story. It was full, with many from the upper reaches having come down. And here again, as I scanned the floor party, I wondered, is this what those 70s Winterland shows felt like—intimate and non-glamorous, and decidedly not the hottest ticket in town?

Like my discontented new friend—whom I never would have met at an activist event, or at Mess Hall, or through a critical art project—people are back to speaking and working against the system, and most importantly, hating it while having to make do in it.

We used to play for silver, now we play for life;
And one's for sport and one's for blood at the point of a knife.
And now the die is shaken, now the die must fall.
There ain't a winner in the game, he don't go home with all.
Not with all.

For me, the guy made the occasion more than a party. Maybe not a political rally, but even better, a politicized reenactment of Deadhead social memory once in danger of being permanently overtaken by stylized consumerism and now returned to the truth of an aesthetic experience, a pre-enactment of times to come. We are going “furthur” indeed, both forward and back. 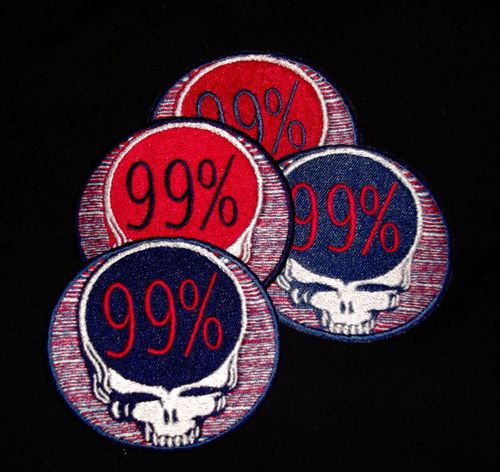 Mayhaps it was me that you Miracled at the Palace in 92.
~ This past West Coast run we saw plenty of empty venues. Utah was especially remarkable since tickets at the door were only $20! The place wasn't even a quarter of the way full.

Glad you enjoyed my patches, but I have much better pictures of that one!
(Came across your blog by looking for Images of Furthur at the Wang, and I saw my patch.)

Anyway, keep on keepin on!

That is a freaking great search engine coincidence. Yeah, send me a better pic and I'll switch it out. Send a link if you have one.

My cousin's trying to talk me into the Merriweather Post Pavilion show on July 8. Maybe if the stars align....

Thanks for the pics.

Yeah, a west coast friend tells me she went to the first of two Bobby/Bruce shows, figuring it would be a good time. But it was so great that as soon as she got home, she went online to buy a ticket for the next night.

For me, I am in fact booked for Furthur on July 8!