« thinking about a button | Main | nyc: summit notes, before the event »

The Center for Book and Paper Arts at Columbia College commissioned me to write a text to accompany the exhibition The World As Text from earlier in the summer, organized by artist John Preus. The publishing schedule has been pushed back, the show is over, and I have not been given any info on a definite timeframe. But that is what a blog is for. Here it is. 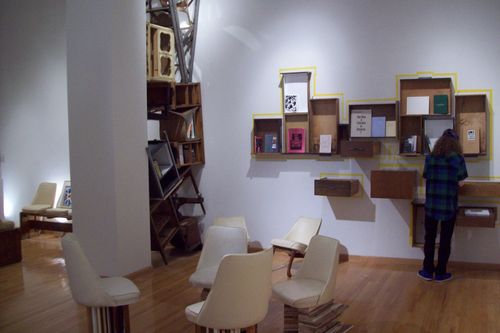 What do books ask of us, besides some time with our minds and our eyes? Our ears, fingers, and palms? Our butts and our backs? Using a book usually means using all of these things. The comfortable functionality of most ordinary books is based on conventions that attend to the act of reading, that is, bringing all these body parts into coordination. But while the average paperback bears evidence of considerations that go into making a book a user friendly object, the space beyond the reader’s body almost always seems to lie outside the bookmaker or designer’s purview. And still the books demand of us—their readers, borrowers, and collectors—a consideration of space and support, of storage and display solutions. Books need a furnished space in which we can read them, look at them, and learn from them. A collection of artists’ books want even more, neither the false neutrality nor the ostentatiousness of a collecting institution, but rather a space equal to the books themselves.

For decades now artists have been making books and book systems that take note of the space in which books get read and browsed. That attention could be negative, as in the literally passive aggression of Jorn and Debord’s sandpaper-bound memoires. Or utopian, as in the swarming circumvention of commercial art scenes and the creation of autonomous networks through mail art, which so often made use of book forms. The fine press bookmakers who create amazing hand-bound or letterpress printed books that seduce through aesthetics and celebrate a shared history of analog skills, situate their books self-consciously or not in the conservative surroundings of the special collections libraries or within vitrines in museums and art centers. Artists of a revolutionary nature have sometimes reworked the relationship between books and printed matter and their spaces of study altogether, as in Temporary Services’ Binder Archives. But it seems the “reading room” itself remains under-developed as, ideally, an aesthetically unpredictable but eminently functional space.

Lots of books need to be disposed of. Bad novels, mass market paperbacks, textbooks, pamphlets, ring binders, magazines, and manuals of all kind overflow the bottom tier secondary markets. That is, if they are lucky enough to make any stops at all before going to the recyclers, incinerators, and landfills—in the case of mass market paperbacks, sometimes from the store rack straight to the dump, unsold much less unread. Books-on-demand and the new legitimacy of self-publishing are bringing books into existence that as of yet have no clear long term place in the world. E-books promise a whole other universe of waste, plastic, recoverable heavy metals, and unread gigabytes. Perhaps the Adam Batemans of the future will arrange thousands of e-book readers in carefully interlocked stacks. On the other hand, ever more books are collected, protected, conserved, and put away with some notion of perpetuity—or else treated as a semi-liquid investment. The pool of buyers of vintage, antiquarian, and collectible books, magazines, newspapers, maps, cards, art books, and comic books, has been greatly enlarged by the Internet marketplace, bringing in who knows how many buyers who otherwise might never have found access to such objects. Other than bidding and buying, the disparate online world of book wealth includes the viewable items of special collections libraries, the pictures of personal collections that generate bookshelf envy, and the occasional news item about institutional acquisitions of personal libraries and archives of notable persons. Electronic media in all its forms and uses in relation to books only makes the problem of real space functionality and purpose if not more urgent, then at least more neglected. Just ask any librarian, or for that matter, the former strategists of Borders.

How many of us have furnished our own homes in ways shaped by the spaces of books, from out in the world? I have a favorite reading chair. It is a sturdy Danish armchair with a torn leather seat that I rescued from the curb in Hyde Park, which also happens to be one of the best neighborhoods for finding books—new, used, and thrown away. That chair, both in my front room and on the curb where I found it, represents the way in which books exist not just a medium and a technology in themselves, but also as a core form around which revolves a particular field of behavior and material support. I have a friend who bought a table from a public library that was in the process of replacing their furniture, repurposing it as a kitchen table. How many and what kinds of books had spent time on that four-legged construction? Weeks after making the purchase at the library garage sale, he found a clue—may ’68 had been carved roughly into the skirt. In the case of my chair, somebody’s junked furniture eventually got plugged meaningfully into another person’s life through the activity of armchair reading. My friend’s table, once the site of quiet study and silent subversion surrounded by public stacks, now supports lively multi-generational conversations and the conviviality of family life, surrounded by a private collection of books. In both cases, we as secondary users and owners came into an inheritance of furniture that merged with the past and present of books.

With The World As Text, artist, designer, and builder John Preus works with and about books for the fourth time.* In each case a client or an exhibition space invited Preus or the collaborative group that he was a part of to design a solution to a problem having to do with books. Books themselves are not one of his media and in none of the four projects did he or the group select the books for which they built structures. His responsibilities essentially ended where the books began. Thus, on one level Preus relates to books as do all busy people in that he simply wishes he had more time to read, finding in them the world of ideas. But having to meet the design needs posed by book collecting clients or book-centered exhibitions reveals aspects of the life, materiality, and use of books that most people, including most book artists, do not think about. Moreover the privileged perspective into books that may be gained by designing and building reading and display spaces, as well as objects made out of books, becomes quite interesting when set in relation to Preus’s constant interest, the inheritance and mutation of building and architectural materials and their utility. The question is, how and where does his evolving understanding and view of books, book collections, and book culture dovetail with his larger commitments to building out of materials—often scavenged or drawn from streams of surplus—that contain particular histories of design put into use, cultural patterns, and economic conditions.

As with my friend’s table or my chair, the desks and chairs in The World As Text have been brought out of one bookish environment (maybe an office, maybe a waiting room) and put into another. The difference is that Preus and his team were charged with no mere task of salvage and re-use, but rather of formal mutation within the confines of overall functionality—in other words, to create furniture that leaves the realm of furniture, but still functions as furniture. It is an ambition to match that of those who curated the books on display, as well as of those who authored, designed, and crafted the books themselves. The measure of success then, might also be those of the books. That is to say, will the creations of Preus and his team—not only the discrete objects, but also the reading room as a whole—live on after the show, as the best books live on after they are returned to the shelf? My guess is that Preus himself will only grant success when he sees that the project lives on as not only material evidence, to be seen and used again, but rather as the most powerful inheritance of all: as inspiration. John has designed and assembled storage systems for several private residences, as well. Check out the Dilettante Studios site.