towards home, but still drifting

The China Drift continued even as the traveling group fractured and parts went in different directions. Wuhan was the place from which the big group, which grew over the first week to twenty-two or so, started to lose members. Xiao, Qu Ge, Orienna, Michael, Emi, Desiree, Jing, and Gordon all caught Thursday night trains back to Beijing. Gao Bei stayed to visit her family and I think SiSi went to another town to see hers. Elaine returned to Beijing the next night.

From Lashihai it was I who fell behind first. After two days together at the Lijiang Studio, I waved goodbye to Jay, Sarah, Ula, Claire, Brian, Stephanie, and Mai Dian as they rode off in the studio’s van, bound for Wumu on the rainy third morning. After another two days with just myself and the neighboring He family for company, I flew back to Beijing, rejoining Jing and Gordon. One night later, Ula and Stephanie caught up to Gordon, Joseph, and I for food and beer in Caochangdi. Stephanie and Ula brought stories of mountain liquors and pictographic scripts from Wumu, the remote Naxi mountain village. I wished I had gone with them until I heard about the rain and stomach bugs.

I had to get back to Beijing a day before them in any case. I needed a day to visit a future niece at the Shepherd’s Field Children’s Village way out of the city, practically in Tianjin. The outing mixed family stuff with research, which is to say, I was quite curious about Shepherd’s Field. It is a full service foster home for Chinese orphans with special needs that grew out of the Philip Hayden Foundation, a fifteen year-old service organization founded by an American couple dedicated to helping orphans in China. I was told that there are currently some 75 children in residence. A minority of them will be adopted into forever families (that is the lingo of American child services culture, something we’ve learned as we have gone through that culture ourselves). Some children will live at Shepherd’s Field for years.

Where would China be without all these Christians helping out? I am sure the society would be worse off, and that there would be many fewer social services than exist now. But I don’t think there would be any hugely increased number of Christian converts. I know that there are intense cultures of Chinese Christianity in both Taiwan and Singapore, as well as overseas. And yes there have been religious movements in China, some of them quite potent on a political level, from the Taipings to Falun Dafa. But I simply cannot imagine a faith like Christianity (which, let’s face it, is founded on some pretty outlandish stories) gaining serious mainstream traction in post-’89, post-idealism mainland China. After all, the missionaries of the nineteenth and early twentieth centuries did not manage to reshape China in any ultimately significant way, even though they fed millions of poor and hungry. My bet is, to most Chinese Christianity is, in the end, something that will always seem foreign. And therefore irrelevant to them, but for the concrete contributions the Christians can make.

More universal, and deserving of more effort to connect and weave narratives are the analysis of and the shared discontents around the concrete conditions of life. The Drift, at its best as an encounter-based research method, extends odd and specific strands of connection, far beyond the convoluted theologies of the proselytizers. So as the China Drift participants went off on our separate ways, I am sure many of us continued to draw connections. That was the case for me when I found myself eighteen hours beyond Beijing, traveling by pick-up from the Bainbridge Island ferry landing to to the Poulsbo home of climate and conservation scientists Jennie Hoffman and Daniel Froehlich, on the Kitsap Peninsula across the water from Seattle. My first stop: the grave of Chief Seattle, he of the famous words that laced a requiem for his land and culture with the biocentrism we dream of today. What place to kiss the ground of my country could be more American–and more global. And true to the experience of drifting over histories, places and cultures, thoughts about common fates and all the rest, I was just a little surprised to find that Chief Seattle had been, according to his gravestone, baptized. Those Christians again. Maybe they'll get us all in the end, Chinese or not. 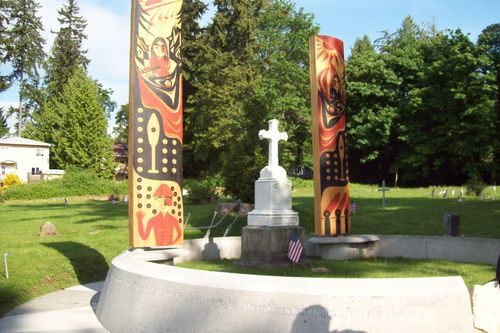 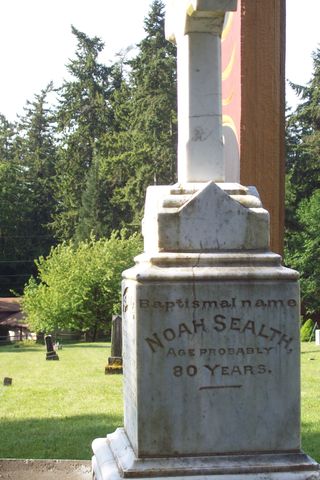 Later that evening Dan continued telling me about the local history, Poulsbo’s Norwegian heritage, the raising of Seattle, and so forth. In the process we came across this photograph by Asahel Curtis documenting the flattening of old Seattle’s Denny Hill, a project also known as the Denny Regrade. The earthen towers visible in the photograph are the property owner holdouts who demanded better compensation or maybe just refused to leave. Having just returned from the land of the nail house, I thought I was seeing double, through time and space.

The part of Seattle that was reshaped by the Denny Regrade eventually became known as Belltown. Decades after whatever upheavels caused by the Denny Regrade had been settled or forgotten, artist Brett Bloom documented the neighborhood’s recent creative efforts to humanize the available public space. I remember learning something about Belltown when Brett and Ava Bromberg released the book seven years ago. But it was not until this trip, with China’s nail houses, big hydroengineering projects, and, most of all, the report we received while in Wuhan about the property megadeveloper OCT’s plans for an amusement park on the shores of Wuhan’s jewel, Donghu, fresh in my mind that the work in Belltown resonated. Now I wonder, after the futility of a last stand, whether in the face of corrupt developers or unstoppable eminent domain, what are the struggles and achievements to come, even on the same piece of land? What the Denny Regrade showed is that after the development happens, other problems and challenges emerge; it is always a matter of spatial politics in the end, and there is never a perfectly satisfactory (or even minimally functional) spatial arrangement for every stake holder. There is only another political problem.

I spent my first night back on North American soil managing my jet leg constructively—a 3:30 AM departure for the backlands of Fort Lewis and McChord AFB, to help out with some bird banding. It was the first session of the season for this particular station, one of several maintained by the Puget Sound Bird Observatory. 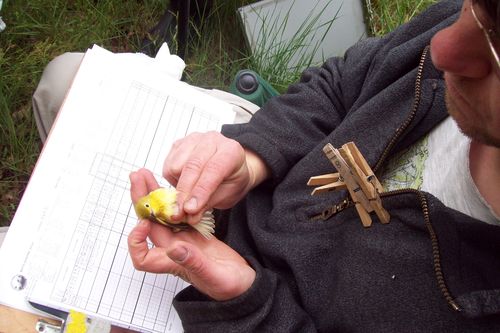 The data collected is given over to the MAPS program of the Institute for Bird Populations, one of the only continent-wide research programs that allows for a large-scale picture of bird populations, without which conservation management would be comparatively blind.

Dan told me the story of how the MAPS program came to be. It had to do with the timing of radioactive releases from the Chernobyl disaster in 1986, the suspicion that catastrophic breeding failures among certain West Coast raptors that year were linked to the April 26 disaster, but then not having the data to conclusively determine whether the radioactive iodine cloud could in fact be counted as the aberrant factor. Thus the MAPS program was born, to build a global perspective on bird population trends across species, through continental units. Obviously, with the Fukishima disaster still unfolding, not to mention the acceleration of climate change and habitat destruction, the work of collecting data is more important now than ever.

That said, it is science, meaning, attachments to presuppositions must be held minimal, even if those presuppositions are somewhat operational. There are simply too many factors at play at the level of detailed interaction between organisms and environment. Dan himself offered that the data collection helps with the broad outlines of what’s going on, but in the end the whole effort is still an educated gamble. While the physical laws point us toward definite conclusions (ie greenhouse gases work in a known way, therefore the planet is warming), the complexity of the planet’s natural systems makes management often less than straightforward. To the politically minded inhabitant of planet Earth and the politically-minded experimental artist, it is where our work exists: careful diagnosis, experimental strategies of response, and uncertain outcome.

Re: Chinese Christians -
What I saw in my travels through Latin America was that the evangelicals gained ground when there was a distinct economic advantage to conversion. The association that Christians had with each other often led to jobs and work. This was especially true in places where the catholic church had been less supportive of the poor such as Guatemala. In Nicaragua and El Salvador, where liberation theology had a larger hold, there seemed to be fewer evengelicos.

On another note, during the post-pogrom diaspora of Russian Jews, a significant population ended up in China. A close friend of my mom, who recently died, grew up in China and emigrated to the US around the age of 15.