« towards home, but still drifting | Main | a chimerican revolutionary celebration »

It is high summer in Madison, warm lakes, fireflies, and thunderstorms.

And camping. Not in the woods, but on the sidewalks and patches of grass outside the Capitol. 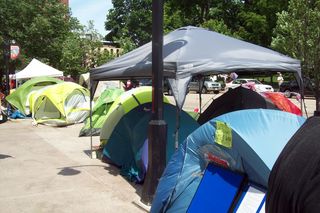 The Wisconsin Uprising lives. Which is saying a lot considering that after the real, meaningful, and historic victories of the first two to three weeks, we have suffered a string of defeats, each more serious than the last. But the movement is in a stage of metamorphasis, in a fragile state but trying to grow wings.

So let us review the political achievements of the Scott Walker regime, pretty much all of them concluded in the month of June. After recounts, at the very end of May the April 5 election for Supreme Court was finally certified in favor of the reactionary incumbent, David Prosser. The state’s Government Accountability Board declined to review the widely reported irregularities in the Waukesha County vote-counting process that made the difference in the election, despite problems during the recount that were documented by observers. The challenger declined to call for an investigation, instead opting to note the irregularities in a statement that called for improvements in the election system. Only about two weeks later the Supreme Court overturned the ruling by a Dane County judge that blocked the GOP-backed law stripping state workers of their collective bargaining rights, in a legally unconventional opinion blasted by the minority. The end of collective bargaining and payroll-deducted dues collection is now the law and will probably be upheld against further legal challenges. And then, as of last week, the budget, packed with deep cuts to nearly all state services (for example, BadgerCare, the state’s award-winning Medicaid program that serves about a million people), savaging anything progressive in particular (past provisions friendly to wind energy), and doling out special favors to private interests (the highway and road construction lobby), was passed with zero input from the Democrats and now waits to be signed by the governor.

The curtain on this first drama has been drawn. Austerity is come to Wisconsin, dressed in the brown shirts of anti-abortion fanaticism and the Voter ID xenophobes, planned by the hard-scheming policy minds of ALEC, and sponsored by Koch Industries and the Cline Group.

On the left the consensus is emerging, just maybe, if the many movement analysis panels are to be believed, that the leadership of the unions was too timid. Of course the rank and file and grassroots knew this as it happened—on the night of March 9, to be exact, when Scott Walker essentially dared the workers to strike by ramming through his union-busting bill. As gratifying as it is to have one’s assessment affirmed even if long after the time of consequence, moving forward I am not convinced that the movement, at least as constituted in Madison, has the power for what it is going to take to halt the Walker regime, never mind undoing the damage. That is because the movement’s last remaining hope in the legislative arena is in the recall elections and our efforts on that front have been spotty to say the least.

Six sitting Republican and three Democratic state senators will defend their seats in an August 9 recall election. The money on the conservative side is already pouring in, as are the dirty tricks, the most widely publicized of which is their tactic of running fake Democrats to screw up the primary elections. Knowing this already, and having seen the Waukesha County electoral theft in plain sight, the Republicans will no doubt resort to any tactic that they can get away with. They know full well that a result short of a three-seat net gain for the Democrats will preserve not only their lock on Wisconsin government, but also crush the chances of a later recall campaign targeting Scott Walker (which cannot be filed until he’s been in office for a year).

In the meantime, the looming recall elections have the Republicans nervous enough to be piling on new policy and legislative initiatives at breakneck speed. There are too many proposed laws and regulations to go into here, but you can trust that they are nearly all uniformly hostile to any sort of public interest, and some are so extreme in their costly privatization schemes and ideological slants that even Republican voices are questioning them. The recall elections are all the more important as a result, but only as a negative achievement. In other words, if the Democrats do not gain the majority, the Republicans will trumpet their victory, call it an approval of the Walker agenda, and press forward even harder. If the Democrats win, they can only slow or stop the process, at best. Nonetheless, we must win. Youth and minorities will make the difference, which, again, given their rates of participation is anything but a safe proposition.

So what to do? Helping with the dispersed recall campaigns in other parts of the state (election in seven weeks) is only the first of at least three shifts attention away from Madison. The second is finding meaningful ways to reach out in support of our comrades elsewhere, to return the favor to the people of the world who touched us back in February and March, whether in Spain, Greece, and Egypt. These gestures are more important than ever in the YouTube age.

But the most important pivot turns toward the looming battle over proposed new mining in northern Wisconsin. This is primary extraction, a proposed four-mile long dirty gash (inevitable leaching of sulfides, acids, and mercury) at the headwaters of the Bad River, which flows directly into Lake Superior, the largest and cleanest of the Great Lakes, the planet’s largest freshwater system. The formerly unprofitable levels of iron ore are now viewed as a pile of cash, an illusion driven by the appetite for steel in China and India—the main markets to which the taconite pellets will be shipped. Some of it would probably end up being unloaded in Tianjin.

The battle will bundle together a host of constituencies, pitting Gogebic Taconite and their hired representatives (GTAC, as they are known, was a big out-of-state donor to Scott Walker and expect to benefit from industry-friendly streamlining of regulations that are currently some of the toughest in the nation) against the citizens of the progressive strongholds of Ashland, Bayfield, and Iron counties, along with the Bad Water Band of the Lake Superior Ojibwe, whose traditional wild rice harvesting beds lie downstream from the lands eyed by GTAC—all in the context of lost American industry, globalization, and new BRIC economic power. This federally recognized band, though small in numbers, includes veterans from the Walleye Wars of the 80s and the Crandon Mine campaign of the 90s, both of which were successfully fought by grassroots anti-racist and anti-corporate coalitions. In the two campaigns, activists led by indigenous defenders of the land performed direct actions that confronted racist groups on the ground, stopped industrial equipment on the roads and tracks, and engaged legislative and media fronts simultaneously. In meetings, in letters to the editor, on message boards, references are already being made to both struggles. If the efforts to begin mining continue to advance, then the north woods is where colorful midwestern radicalism will make itself felt again. With the mining interests attempting to divide public opinion by promising jobs (first 700, then inflating that number to 2800–who believes them?), the position of labor will be interesting to watch. I’m not very hopeful, but what a time and place for labor to break its conservativism in relation to environmental politics. If there ever were an occasion to gang up on the common enemy, this would be it.

After the budget was passed last week, activists struck the camp. The square is mostly quiet, the Capitol will be reopened without metal detectors in about a week.

Walkerville is no more. Everywhere is Walkerville.