Some of us diasporic Chinese who “return” to China sometimes have family and kin obligations that other visitors do not. Even though I am two generations removed from the mainland, this is still the case for me, depending on where I go in China. Sometimes it is a pain, and sometimes it is a pleasure. On this trip my primary obligation was more than a pleasure, it was a real blessing. The Wang clan has had a long and close family friendship with a man named Yang Xianrang. He is a friend to my father’s side, with a very close history over three generations dating back to the days of my grandparents in the intimate circles of the Chinese minority in Korea. Professor Yang went to study in Beijing as a teenager, in 1944, tested into the Central Academy of Fine Arts for university, and went on to a long career as a faculty artist and then a dean at that school. He visited my family on his first trip to America and stayed with us for nearly a month, around 1981 or so, and that’s when I met him as a kid. He spent those days painting in our basement, and both I and my parents have works of his from that time hanging in our homes today. Shortly before he retired from CAFA, my mother and I visited him in the winter of 1992 in Beijing, my first time to the mainland. After retiring, he joined one of his children in the United States, first in Philadelphia and then in Houston. After sixteen years, he returned to Beijing for the twilight of his career. In the year 2011 he is eighty-one years old. On this trip, making it a point to visit Uncle Yang was a priority. But this is the Drift, so why not fold him in, somehow?

He trained as an oil painter, spent many years working in water colors, and then turned to traditional ink and brush painting. But his widest renown was earned as a woodcut print artist. He produced a number of the iconic graphic images from the revolutionary period, including works such as these. Being Central Academy professor for so many years, Professor Yang also has the satisfaction of having taught a number of artists and scholars who later went on to international prominence, including artist/printmaker Xu Bing and art historian/curator Wu Hung. 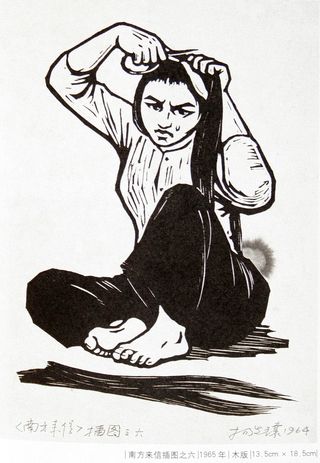 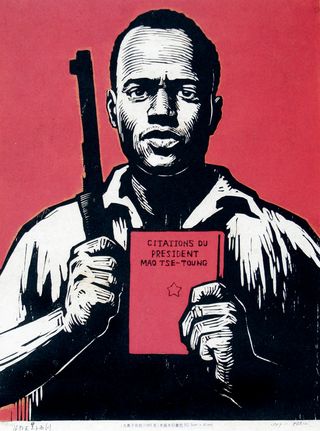 We invited Professor Yang to HomeShop for an informal conversation, which turned out to be a cross generational encounter the likes of which I’ve never really heard of, much less experienced. HomeShop promoted the event up and down Bei'ertiao Hutong in the old-fashioned way, with posters. 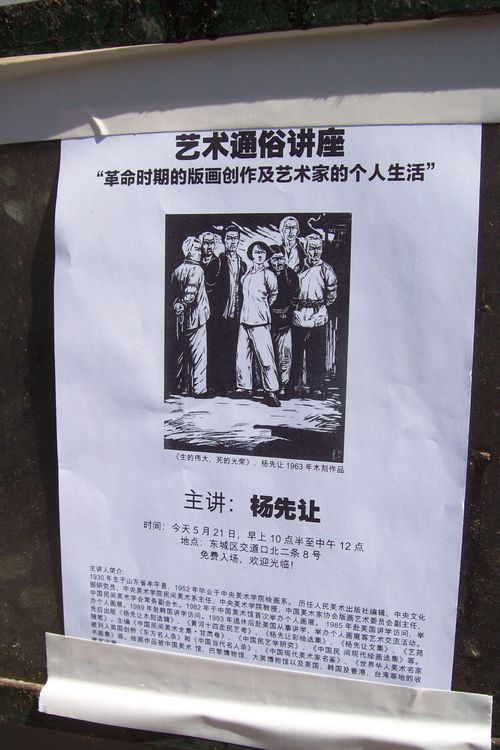 Professor Yang brought along a friend of his, Professor Wen, an oil painter who was one of his early students but is now also retired from the Central Academy. Professor Yang spoke of his period as a woodcut artist, the whys and hows of his woodcut activity. He told of how his image of Zhou Enlai became a popularly disseminated image that broke through to the mass level, with ordinary people buying mass reproductions of it. Together they described their work and careers, showed examples from catalogues they brought, and took questions. They shared their perspectives on the art market boom in China, the influences of European art traditions, and their reflections on having had such traditional training. They took some questions about art education, how CAFA has changed. Professor Wen in particular expressed suspicions about the art market. He told a great story about how he had sold works to a Japanese collector who then asked him to sign the works. He acceded. But then the collector asked him to alter and then sign a canvas painted by another artist. Professor Wen found the request appalling, refused and broke off the relationship.

Michael and Elaine took a turn explaining to the two elders the activities of HomeShop. Running through the various functions of the space (residency, design, translation, food work, etc) seemed to confuse them. But there ended up being two significant areas of connection and understanding. One was revealed when the younger generations expressed their skepticism about the turbo-speculative art market, their distaste for the vacuousness of meaningless monumentalism, and their sincere desire for serving a public and community. There are of course substantive and irreconcilable differences in the particulars of practice having to do with the innumerable changes in the world over the last sixty years, but some of us felt that a shared spirit could be found.

The other connection came with the final encounter of the morning, in which we showed these two old-school masters the large poster produced by the Beehive Collective, The True Cost of Coal. Sarah Lewison had the brilliant idea of bringing a cache of these with us to China, the land of dirty coal, and here one was unrolled to great effect. Professors Yang and Wen could see that in addition to the digital and social media of our contemporary world, there remains a special place reserved for handworked media—and specifically pencil drawing and illustrative figure drawing—in our toolkits. They were extremely impressed and greatly heartened by the quality, the detail, and the social responsibility evident in this work. 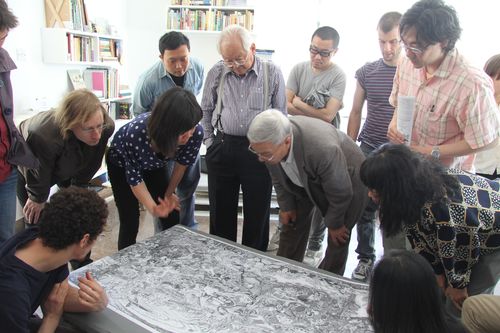 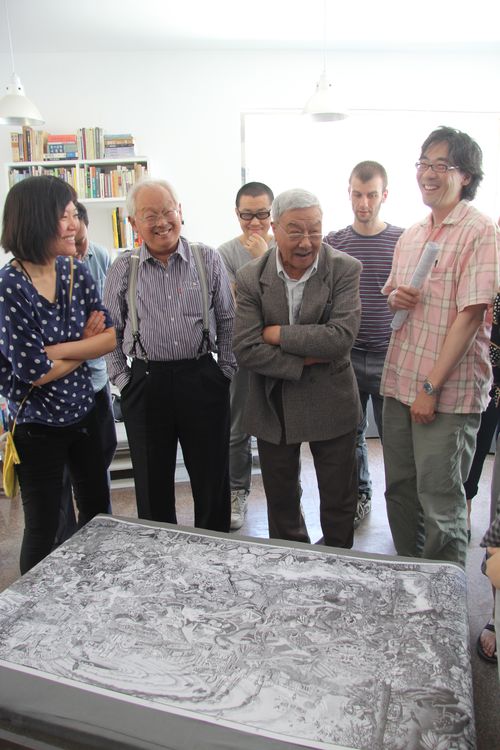