I am wrapping up my teaching duties for the semester; summer is around the corner. True to the short springs of the upper midwest, it’s about to get warm after only week or two of sixty-degree weather. Up until late April spring had been all chilly rain and occasional flurries, as cold to the bones and body as the frosty air of winter proper. The shock of summer heat will be made greater by travel. A week from now I will be in Beijing, under the blazing, hazy sun of their hot season. It will be my eighth trip to China. Each time the experience becomes more familiar, but I don’t think it will ever feel routine. Maybe because the older I get the more I feel rooted to the midwest of my birth, youth, and adulthood, going to China will never feel like a casual trip, even as I spend more time there. Perhaps the more I live in both places, the more I understand the distance between them. Getting ready for a trip to the other side of the planet is a good time recap some recent art experiences.

I made it to the Wisconsin Labor: A Contemporary Portrait show at the Watrous. It was full of photographic images and some video that faithfully, respectfully, and affectionately document the people who perform the work that makes Wisconsin. Workers in the agricultural, retail, hospitality, tourism, manufacturing and other sectors besides, are represented, with the subjects mostly shown in their occupational environment.

But I left a tiny bit disappointed. The show could have and, really, should have been more ambitious in its concept. Of course, there is the increased urgency of addressing ideas having to do with workers’ rights because of Wisconsin’s current political climate—ie Scott Walker’s all-out neoliberal assault on all things public. But obviously the timing of the show cannot be planned in relation to a spontaneous social movement. So it is not that.

Rather, I wished that the exhibition concept incorporated some analysis of Wisconsin’s economic system as it exists in the region and world. Maybe that can’t happen, since it would mean addressing the logics of globalization. But this is the problem: the concept and reality of both Wisconsin as an easily defined place, and labor as a self-evident category of human activity, are no longer the stable realities they were one or two generations ago. How, for example, is the work of those who live in Wisconsin but work a job across a state line to be categorized? Are we not “Wisconsin” labor? For that matter, what about the workers who make all the stuff that is imported into Wisconsin? What about the call center employees in India performing customer service for a Wisconsin company? What about the financiers and traders on Wall Street or in Dubai who invest in Wisconsin mortgages? Are they not Wisconsin labor? To me, the most glaring oversight on the labor side, for that matter, was the absence of the unemployed, especially those in the job hunt. Looking for work, it is often said, is a full time job in itself. I see this at the public library all the time—jobless folks working on applications, resumes, cover letters, and browsing the jobs listings over and over.

Also there is the question of our present Great Recession, which as many of the more forthright social scientists will admit is actually a depression. This was hardly touched on in the show, but it defines the economics of all but the wealthiest households these days, and most certainly shapes the lifes of the working people represented in the show. To me, this is a picture of Wisconsin labor: 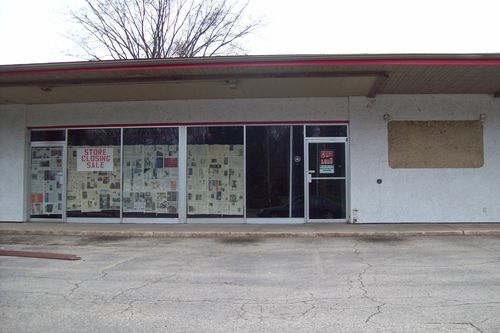 That's my favorite local music store, Good ‘n’ Loud, closed down due to a weak economy.

Deeper still, how about this for a picture of Wisconsin (or “Michigan,” or “California,” or “American” labor: 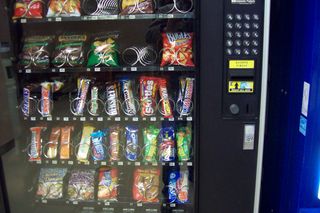 Automation, at the most quotidian level, rendering redundant a candy store or snack counter worker. These conveniences are so deeply naturalized by now that we hardly think of them as part of an economic logic that makes human beings unnecessary. Only the booths where a parking lot attendant once sat reminds us that unemployment is built into our economy’s tendency toward real and imagined increases in efficiency.

I also caught the MDW Fair in Chicago. I browsed the last two hours of the Sunday it was open. Even though it was near to closing time, the energy was great, and as expected delivered a social experience as much as an art experience. This was an event organized by and for Chicago, and damn the big shot outsider buyers courted by Art Chicago and pretty much all the standard commercial fairs of other cities–that seemed to be the attitude, especially considering that scheduling it for only one weekend later would have brought it into direct comparison with Art Chicago and Next (favorably, is what most people I talked to felt). The organizers—Threewalls, Roots & Culture, and Public Media Institute—did an excellent job of bringing on board every grassroots initiative, small art publisher or bookstory, apartment gallery, non-commercial space, oddball collective in Chicago, and even some local art school departments.

The bottom floor of the Geo Lofts was an open floor display of various sculptures and constructed projects. For me the highlight was getting to see Hui-min Tsen and James Barry’s Mt. Baldy Expedition boat, finally: 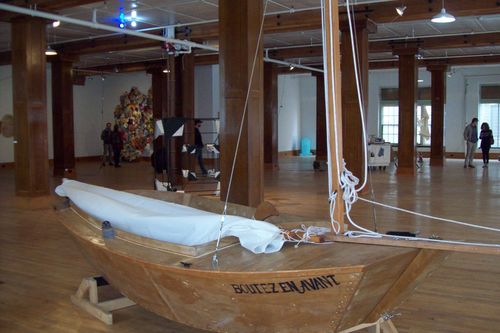 The second floor was all booths, tables, and exhibition walls. Regional Relationships, AREA Chicago, and Half Letter Press were all there, along with some cool things and people I hadn’t known of before. Like this: 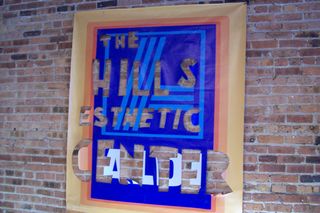 You know I'm a sucker for all things Aldi.

I was very happy (!) to see the Happy Collaborationists (a group of Columbia College alumni making fun things happen around town, including Anna, pictured below), a bizarre and super engaging floor arrangement in the Green Gallery booth, and the free-standing kiosk of the Silver Galleon Press.

There were public discussions all day on Saturday and Sunday on the third floor, along with the first public display of the Threewalls CSA project. There was also a small room with a display of Dorchester Project plans, a Hyde Park Art Center exhibition space, and Philip von Zweck’s untitled free editioning project to which I was thrilled to contribute a drawing. 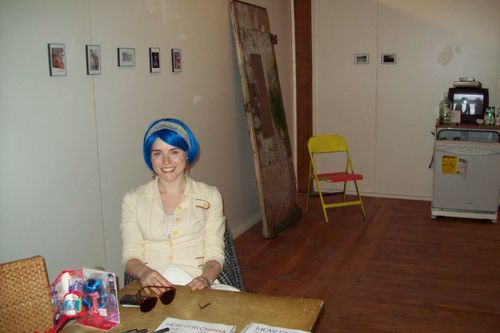 All in all,
satisfying. That’s saying a lot for an art fair.