on wisconsin, back to the art

With all the crazy political stuff going on in FitzWalkerstan, aka the state formerly known as Wisconsin, over the last two months, I have not had time to write posts about art. I can make up for some of that with a quick review of shows I’ve seen in recent weeks.

First there was Pittsburgh. There I managed to catch the Paul Thek Diver retrospective at the Carnegie Museum of Art. I count myself lucky. This is one of those shows for which the hype is well-deserved. I haven’t seen a big show that’s hit me with such impact since Mies in America. After seeing it, I feel secure in saying that for all the new studio Ph.d’s, artist-friendly curators, and global art world integration, we just don’t make artists like Paul Thek anymore.

The highlights were three. First, the early wax sculptures that gained Thek his renown were truly blossom-like in their over-ripe ickiness, but perfectly balanced out by the coolness of metal and glass. Additionally, all of the materials gained through age, in equal parts retro-neato 1960 artifacture but still nightmarishly brutal. Secondly, the surviving images and elements of the wild, whole-gallery installations that he did in European kunsthalles in the 1970s fill a whole I didn’t realize existed in the history of installation art. The partial nature of what survives adds to the intrigue and good fortune we feel, piecing together the story of a feral and fertile art world moment. Finally, there is the recreated hanging of his final show, just before his death by AIDS. The first two highlights are each amazing, but the presentation of the final show proved the most moving in the end, with the dying artist all but ignored by the New York art world that once adored him.

Three other shows at the Carnegie were bonuses. I wandered into the hall in which the show You Are Here: Architecture and Experience was installed and discovered the etchings and video of Cyprien Gaillard. The small etchings mashed up mountainous landscapes with modernist block high rise buildings of the public housing kind. His striking video Desniansky Raio, set in (and above, in some cool ariel footage) a monumental social housing complex outside Kiev, reminds a midwesterner like myself that the massive blocks of public housing I associate with Chicago were in fact an international phenomenon. I’d like to see more of this guy’s work and I am sure we will since he is still on the young side (barely thirty, I think).

Then there was a loose installation by Haegue Yang that filled a medium sized room with odd arrangements of exposed metal racks strung with wires, light sockets, cables looped, knotted, and hung, and an assortment of metal parts.

It was a bit chaotic and hard to read—though the materials seemed very deliberate, the positioning betrayed no real system. But the direct content was supplied by four television monitors on carts positioned around the room running Martha Rosler videos from her Semiotics of the Kitchen era. 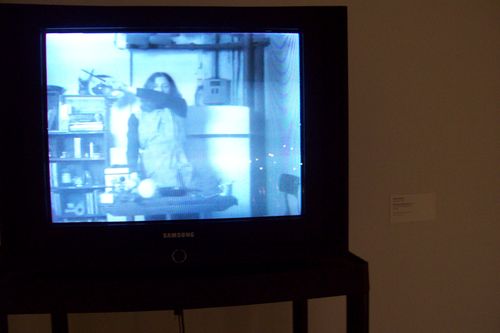 Odd combination, for sure, and I'm not totally buying Yang's work, but I’d never seen those videos. So why not roll with it.

The biggest and best surprise at the Carnegie was the Andrey Avinoff show in the works on paper gallery. Wow. This guy was a noted field naturalist specializing in butterflies and an amazing biological illustrator who also served as the director of the Carnegie Museum of Natural History for nearly twenty years. He was also a semi-closeted fine artist who painted and drew beautifully, with an exquisite hand, shimmering colors, and a runaway imagination. And, he was a mostly-closeted gay man who painted and drew a number of lovely homoerotic works, and was one of sex researcher Alfred Kinsey’s go-to consultants on matters of homosexuality. The show included specimen cases of butterflies he had collected in Tibet and other faraway places. Like I said, wow.

I am sorry to end the Pittsburgh art report on a downer, but that is what the Ayanah Moor show at the 707 Penn Gallery was. The full wall coverage of all-text screen prints made for a striking visual experience upon entering the space, but once into the detail, the work couldn't keep its promise. The texts read as pretty interesting, the lettering was stylish but not distracting, and the voices speak to the universal experience of communities describing themselves and their home social worlds, in this case black women scenes in different American cities. 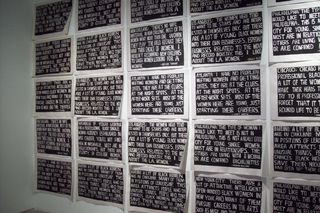 But there were only something like five different voices/cities, texts/prints. For the artist who uses printmaking to cover walls, the problem always becomes one of multiples versus redundancy. If it is really about multiples, then commit to a very small number of different prints. Let’s say, one. One, repeated over and over becomes a kind of patterned drone or unending repetition, either of which has its own kind of power. If there are five, arranged with no discernible pattern, and the walls are covered by simply repeating those five, then it’s an experience of redundancy—for the viewer, it becomes an experience of always searching for more and never finding it. The expectation of complexity is raised but not delivered. That was the case here, which is not so unusual in itself, but for the fact that what I've seen of Moor's in reproduction kind of blew me away, so this was a disappointment. 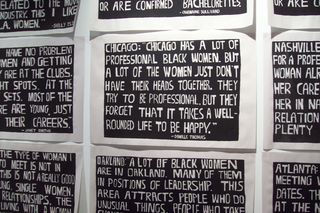 I’ll report on shows viewed in Madison and Chicago before long.