I just reached home after two weekends in Chicago and the days in between in New York. I went for the CAA conference, or at least that was the excuse. The last time I was in New York was the fall of 2008. It was September, around when Barack Obama’s candidacy first started to take on a sense of inevitability. The stakes of the presidential election had been raised that very week with the $600 billion bankruptcy of Lehman Brothers. Creative Time’s Democracy in America Convergence Center opened over the days I was there and so did Signs of Change show at Exit Art. There was a sense of possibility in the air and in the season.

This time it was different. Signs of Change is now a wonderful book as well as an exhibition. A little more than two years into the Barack Obama administration, the United States is in the full grips of a conservative reaction. How appropriate is it that the only show I managed to see in a week in New York was AbEx in NY at Moma. Not that the AbEx artists were conservative (Motherwell’s Spanish Revolution elegies positively radiated with the vitality of revolutions, then and now), but the retreat into formalism, individual spiritual journeys, and abstract systems is a path that always stands in high relief in times when retreat from the political seems perversely reasonable from a survival standpoint. I was fortunate to walk through the show with one who knows about painting, my neighbor from Madison Derrick Buisch. True to myself, I found the drawings and work on paper as or more satisfying than the canvases. But as far as seeing other shows goes, fortunately this was New York, which meant I could see some cool and canonical things without having to go out of my way, such as… 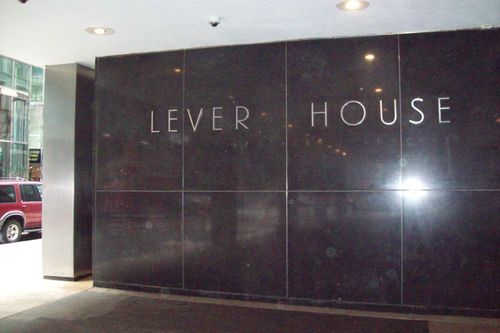 The conservative climate of the nation was not in evidence at the conference. It being CAA, there were quite a few sessions that included a radical or leftist scholarship. My contribution to the conference was managing the production of the Radical Art Caucus newsletter and helping to distribute it on site. This year’s was the first issue overseen by me. The heavy lifting was done by Sam Gould of Red76, whom I drafted in by suggesting to him that we make it an issue of the Journal of Radical Shimming. Being a touch manic and always open-minded about audiences and opportunities, he jumped aboard. Sam, in turn, brought into the project (it had by this point become “a project”) our friend Mike Wolf. The two of them engaged in an extended Google chat done over two sessions about something they’re calling “critical imaginative communities.” You can read that chat here.

Sam did the layout and the interior graphic art. I assembled the newsletter text and fed him the files. I composed and proofed the front page display text in hand-set wood and metal type, scanned it, and sent that to Sam for use in the layout. Sam had a line on a very reasonable printer in Queens, arranged for 1500 to be printed, and had the invoice sent to me. 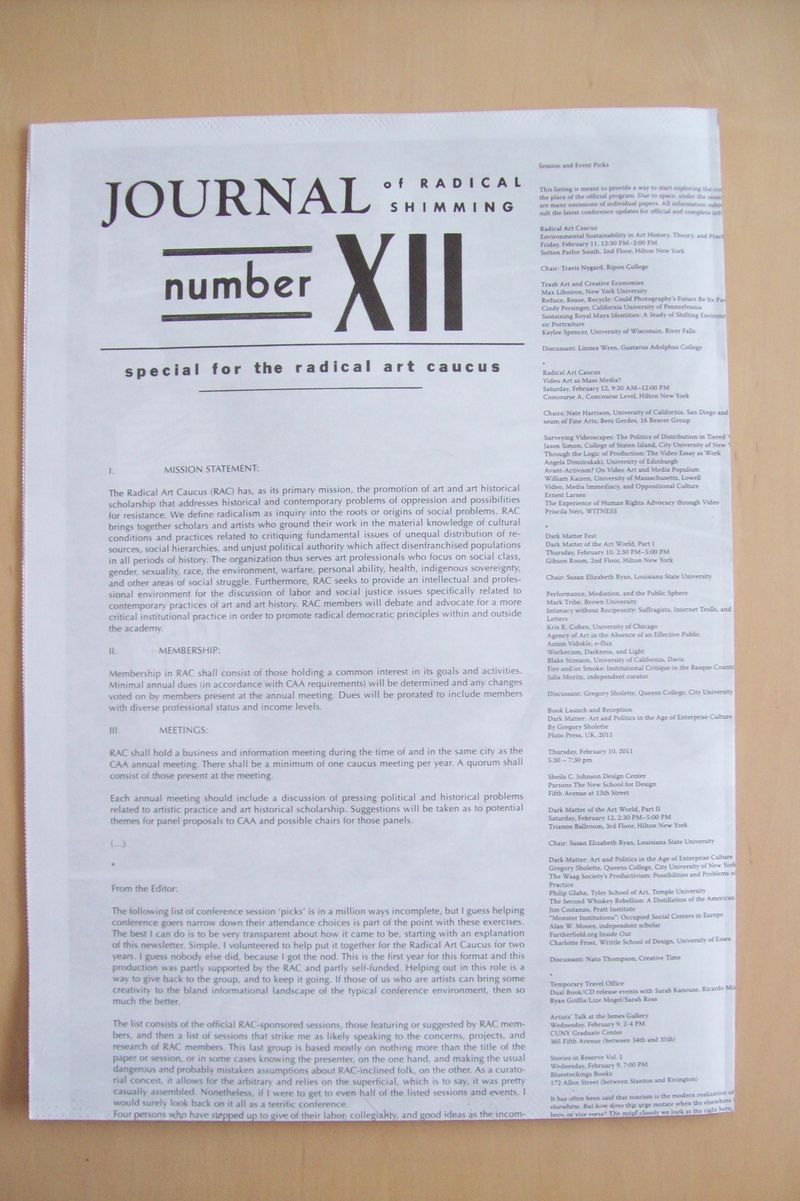 Joanna Gardner-Huggett, our RAC secretary, took on the task of receiving the delivery at the hotel, right near the conference site. Over the days of the conference I called her probably ten or twelve times, trying to figure out how to pick up another bundle. The three co-presidents, Linnea Wren, Travis Nygard, and Kaylee Spencer, kept getting them from her, too. Joanna managed the central distribution point well and with good humor. Together we distributed nearly all at the conference. I blanketed the first Dark Matter session, and Alan W. Moore had the second Dark Matter session well-supplied. I started a couple of stacks going around in the jam-packed Centennial Session on Feminism. I passed them out at the Diasporic Asian Art Network meeting and at the University of Southern California reception. I got them into the hands of Margo Machida, Nicholas Mirzoeff, and Martha Rosler. Through run-ins, I got them to some of the friendly faces I first met at other conferences: Richard Meyer, Peter Mortonböck, and Helge Mooshammer. 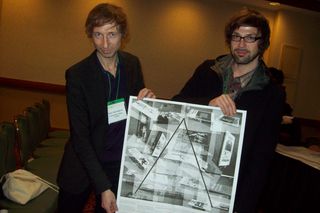 I got them to some people who are name-checked in the interior cascade of critical art players. They seemed to enjoy finding others they recognized in the jumble, and wondered about the names they didn’t know. 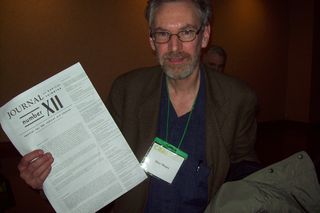 JRS #12 definitely reached hundreds and hundreds of people in the field whom I do not know, and who possibly do not know any of us who were involved in the project. Also, the conference was a great place to make guerrilla placements, like at the book fair. In that sense, making use of CAA as a ready-made audience was a big success. At the same time, there could be some big improvements. For one thing, the listings info was incomplete in one vital area, announcing RAC’s Friday evening meeting and reception. Which, by the way, turned out to be organized as a terrific discussion with two visiting union organizers. I just didn’t have the information when we needed it for inclusion. And for another, the readability of the text in Sam’s radical art tribe graphic was compromised in some key places, which blunted the intended messaging. But no matter—we got it done and distributed, much to the expressed delight of many a conference goer, with only about three weeks lead time, a small budget, and only partial available attention. Not bad for a first effort, and in spirit very true to the best Red76 work. 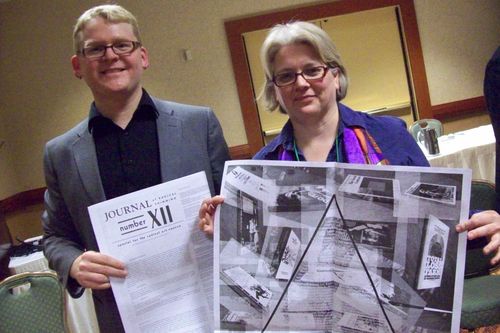 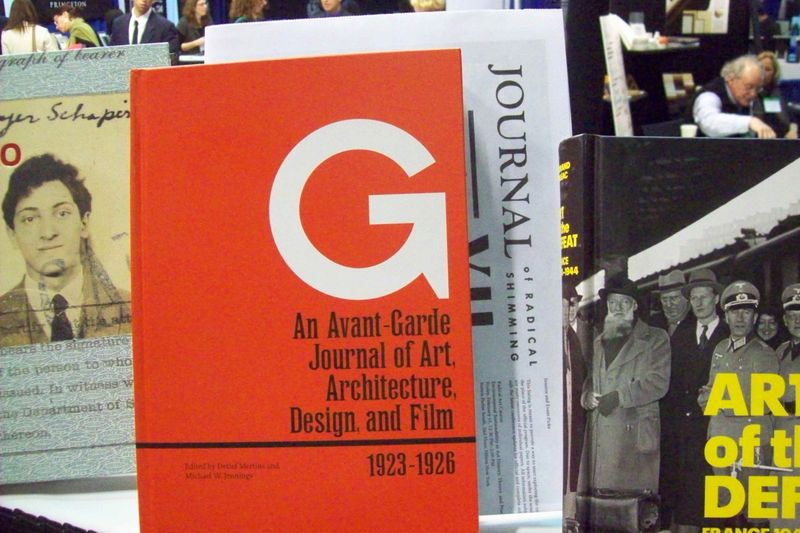 Other highlights from those days included visiting the activist and videographer Dara Greenwald (who is taking it easy and slow while undergoing medical treatment), getting to see for the first time my collaborators Ryan Griffis and Sarah Ross present in a public event setting (along with Lize Mogel and Sarah Kanouse), and catching up with my crash-pad host Naeem (who was in full-press deadline mode). Oh yeah, and the Mubarak regime fell. That was crazy—sitting in sessions or hitting sessions with stacks of the newsletter while receiving Egypt update texts from Naeem, including a blow by blow account of the president’s final, intrasigient address to the nation.

Finally, I crossed the Whitestone Bridge for an overnight visit to Connecticut to see an elderly uncle who no longer travels. I had never driven that part of the country and was blown away by the many miles of decades and decades worth of suburban overflow from the city. 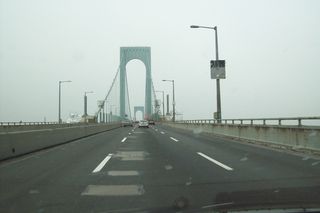 Rolling past all the wealth, the northern end of what the Don Draper character once called “the Cash Belt,” all I could think of were prep school feeder populations and quiet desperation amid the boatloads of taste. The stone walls visible along the Merritt Parkway screamed affluence; the age and history represented by the hundreds-year-old wall work only come into play as a corollary to the modern day wealth of the area. Once in Cheshire, the village where my uncle has lived for 45 years, the blue collar returned to the landscape in the form of Aldi stores and Chinese buffets.