Another Foxconn suicide was reported last week. That would make fifteen since the rash of worker suicides started last spring.

But I’m not sure this one counts. Or at least if it does, it is important to note some differences in this latest case. For one thing, this report describes the woman as an engineer. I’m pretty sure most or all of the earlier suicides were line workers. And, to be precise, she was no longer a Foxconn employee, having been put on leave for reasons of mental illness.

Do these differences matter? What does it mean to be “counting” the suicides, anyway? If there is a political interpretation to be had, then does the breaking of a pattern—i.e. that this person might have been a white collar level worker—strengthen the analysis or weaken it? At the very least, whatever this particular woman’s work situation or mental condition, it makes me wonder about the educated work force in China and around the world. Chinese universities are graduating some 300k new engineers every spring. Many of them cannot find employment in the fields of their training. Widespread disappointments are bound to become a social problem at some point, and maybe soon.

Compare these suicides with the twelve or thirteen self-immolations that have been reported from Tunisia, Algeria, Egypt, and elsewhere in the Middle East in the past couple of weeks. These acts were clearly politically motivated, in the sense that the life situation of each actor was so reduced by social circumstances shaped by political forces that they acted out their personal despair through a gesture with symbolic and communicative power. The first of the acts, that by the young man Mohamed Bouazizi, was precipitated by a direct and personal conflict with a police woman, the street-level representative of the repressive and unfair regime. One of the Egyptian attempted self-immolations took place in front of the parliament in downtown Cairo. Doesn't get much more symbolic than that.

In the North African countries the government, and even a particular ruler, is the target. In the Foxconn case, the government is not the target. Rather, a company with an opaque power structure and nebulously defined responsibilities to its workers (but which for thousands extend to providing room, board, and a community) is the target, if you could call it a target. The Foxconn situation presents the discontented with a more abstract power structure (along with still concrete deprivations). It follows that the actions are also more abstract.

To me the contrast between the Foxconn suicides and the North African self-immolations speaks to the possibilities of symbolism in two different contexts, but the same subjective experience of despair and hopelessness on the part of working people. That there is a global labor issue at hand is evidenced by the contradictory reports about Bouazizi’s background. Some say he was an unemployed university graduate, just like the Chinese grads and the thousands of educated unemployed young men throughout the Arab world. Others say he never finished high school and was condemned to life as a street vendor, forever harassed and humiliated by the police. The dual story perfectly captures the present trend, because whichever is true the conclusion is the same: persons without membership in the elite five or ten percent, without the social and family connections, without property and the status that comes with it, whatever part of the world they are from and whatever their merits, face a bleak future. Or, when some stop to think about it, no future at all.

The question is, will the assembly lines and dormitories of the Foxconns of the world be the promised solution to the unemployed of North Africa, as they were delivered to the peasants-turned-workers of rural and small town China? Because if they are, then in the contest between labor and capital the workers of Tunisia may soon have an adversary more difficult to locate than the parliament building, but all the same despair.

This past weekend twelve artist/writer/collaborators came in four vehicles from three surrounding states to gather in Madison for our third annual winter retreat. For most of the time my home was the setting for the assemblage. This group of people, which over the years has ranged at times between eleven and fifteen or so individuals, sometimes uses the name Compass but more often than that uses no name. What we hold in common is a vocabulary–the vocabulary of the MRCC–and web of relationships between us, many of them collaborative. 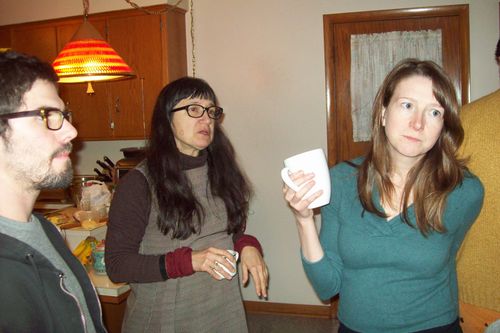 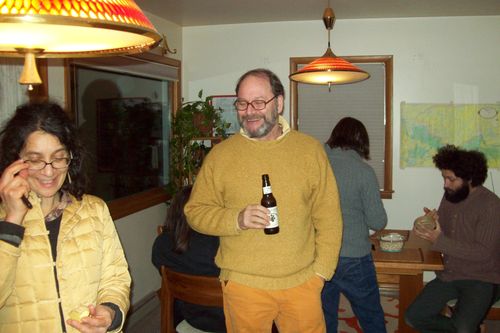 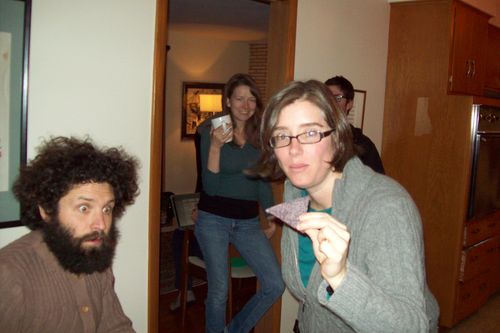 I don’t know how long these retreats will continue. It has been only three years, but already it feels like a tradition, an experience that remains a constant as the particulars of our various individual lives change for better and worse. I can hardly expect that these wintry weekends continue for decades, as did the summer retreats of Grace Lee and Jimmy Boggs, Lyman and Freddy Paine, but, hey, you never know.

One of the pleasures as a host was to have these comrades browse our books. It helps me look at them again through somebody else's eyes. And who doesn't like talking about books?

Certainly we have challenges as a group, in terms of basic self-definition and process. These are something of an issue, or at least a source of potential (and sometimes actual) frustration when it comes to doing anything beyond the basics of socializing and preparing food together. But I am confident that these gummy points can and will be smoothed out if we keep meeting and doing things together; the ideas in circulation amongst us are simply too compelling to abandon, not to mention the demands of our historical age. Mutualism is the countercredo in the neoliberal age of privatized solutions, and no matter its frustrations, offers the joys of a different path. Even as we continue to train ourselves in the ways of collective thinking, we’ll enjoy the simple opportunity to be together, trade ideas, and get comfortable and silly together. Plus, we actually did get some work done on our current projects; directions for 2011 have been set, mapping radical corridors from Beardstown to Beijing to Buenos Aires. Stay tuned.

Oh, and I should say, explore the meaning of place together. As when in early January of 2009 we visited the birthplace and museum of President Herbert Hoover, outside Iowa City. This time around it wasn't a site we visited, but rather a person. A Madison person, sociologist Erik Olin Wright. "Real utopias" was the topic of discussion. As a group, we brought participatory planning in Rosario, Argentina, the Just Coffee cooperative in Madison, the la FEM coffee growers cooperative in Nicaraugua, and Mess Hall in Chicago into one conversation. 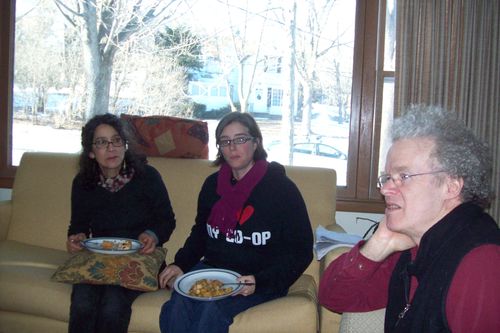 And after it was all over, all the eating~ 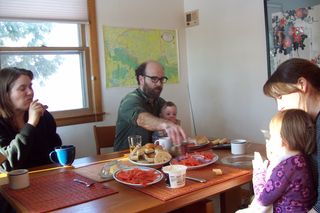 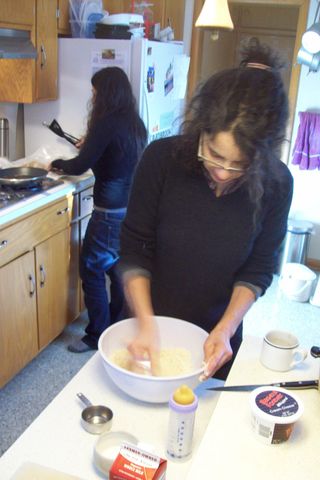 the walking on water (lovely photo by Rozalinda)~ 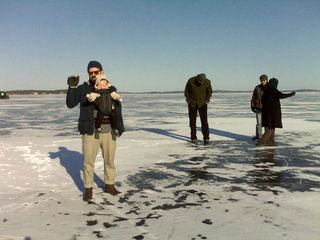 And posing for a picture~ 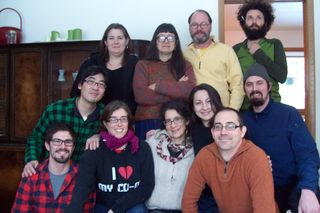 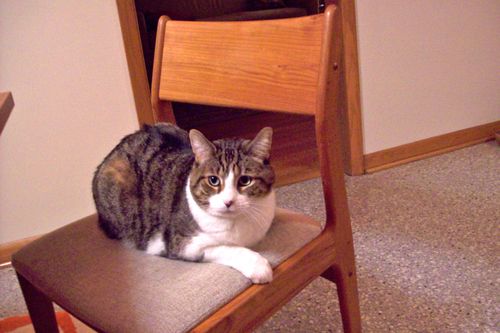