A week ago I visited Fond du Lac, Wisconsin, for the first time. Faculty member John Scotello of the UW-FDL Art Department invited me to lead a workshop for the students. He briefed me on his students’ interest in topical or public engagement art projects, as well as some of the outstanding local issues.

He forwarded to me the observations and thoughts of another faculty member whom he had polled about local concerns. That person mentioned a recent episode of racist flyering, in which mock missing person flyers with the words “Have You Seen Me?” over the picture of a white Euro-American child were placed on car windshields in a parking lot. The flyers included language describing the white race as endangered.

I have not found an image of that flyer but a quick Google search turns up a few news stories about racist flyers being distributed in Fond du Lac, including this one. Fond du Lac is apparently a hub for white power activity in Wisconsin.

The UW-FDL art students are very concerned not only about the extremist activity in the area but about what they perceive as the general level of intolerance of cultural, ethnic, racial, and sexual diversity, on the one hand, and the valorization of homogeneity, on the other. With them taking the lead, we spent the afternoon workshop thinking through doable projects intended to raise the level of self-awareness and introspection among people encountering the work, specifically in relation to cultural, ethnic, and racial identity and identification. The project we sketched out ended up being pretty elaborate, considering these students are only in their first and second years. (UW-FDL is a two-year campus; students must transfer to a four-year campus to finish their degree programs.)

I won’t give away the details, but the public action/performance part of the project is scheduled to be executed before the end of November. I can also share the name of the project: The FDL Initiative Movement. I will update readers when there's more to report. (And now there is.)

I found a couple of free hours to wander Fond du Lac’s downtown. In the antique mall on South Main Street I spotted an odd board game. Odd, because I’d never seen a vintage board game that made direct thematic or design reference to an African culture. I bought it for $15. 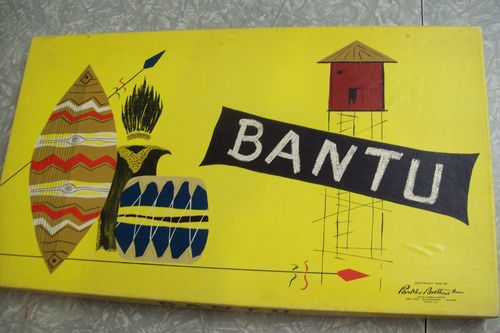 After digging around online for a little bit, it seems that this game, Bantu, is something of a legend among board game aficionados. According to boardgamegeek.com, the game was never produced in a second edition. Stuart Dagger says Bantu was named by Phil Orbanes as one of the “Great Games That Never Made It.”

What is funny to me is that the game itself is very abstract. The competition consists of racing your tokens around a board track, using strategic decisions to block and pass the tokens of the other 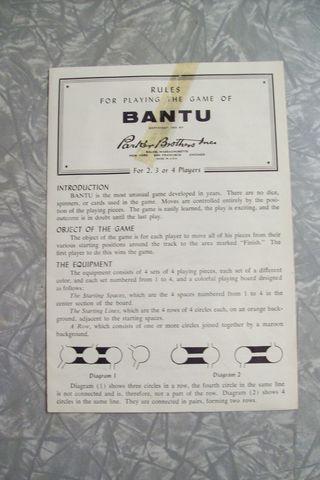 players. One of the distinguishing features of the game is that there is no random number generation. The rate of travel is half pre-determined and half realized in play, depending on what zones one’s token lands on. As in Parcheesi, there is no symbolic or cultural representation intrinsic to the game at all. So why the name Bantu and the “African”-themed graphics? Parker Brothers introduced the game in 1955. Billed in the rules pamphlet as “one of the most exciting games to come out in years,” Bantu was obviously conceived as a rather sophisticated experience as far as board games go. But what would that name and cheap African-ness mean to a suburban American family looking for fun new pastimes? Did the foreign-ness or implied primitivity in the name and visuals lack for appeal to the boardgame buying public? Or did the game just not catch on—maybe because it was simply too abstract and strategic in nature? After all, the game was reintroduced later on as Sack in kit form and still seems to have not hit the big time. 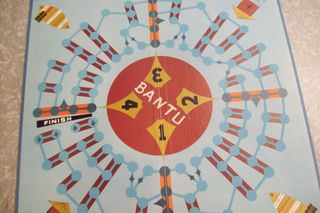 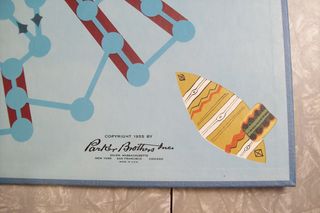 And who in Fond du Lac, of all the conservative places, was curious enough to purchase a boardgame called Bantu in or around 1955?

Having been born here in the '50's, I suspect a frugal parent got it on clearance at the "five and dime."