« video view ruminations | Main | entdinglichung...i have no idea what that means »

It is interesting to visit another society repeatedly. Even two times to the same place can make you feel like you have some potential relationship with it. Many more times, and you build a history of visiting. I feel that way about my experiences with California. I have never lived in California and probably never will. But I have lost count of how many times I’ve visited, between seeing friends, taking advantage of layovers, and maintaining ties to family, including my parents, who lived in the Bay Area for about ten years. I have come to have ideas about California informed by the many visits but only ever from a very partial view.

And what are some of those ideas? Well, I can put one poetically by describing the state of Illinois as the California of the Great Lakes. Meaning the government, private sectors, and parts of the citizenry are equally (but differently) messed up in each state. I mean, there are serious problems in Wisconsin, but the unfolding disasters in Illinois and California are of a whole different complexity. And I say all this as someone who loves those states and not only knows and loves many people who live in them, but sees the dream of American social diversity becoming real in them.

It is not like the familiarity I have with California, but I feel that the same now can be said about my experience with the city of Vienna, though with a different narrative and a more specific point of social entry. I will be there in a couple of weeks, for the fourth time since 2005. Two of those visits involved using Vienna as a base from which I took shorter trips. Each time I returned the city felt more familiar than before, if only by comparison with the completely strange place I’d just been.

It turns out over the next two weeks I will be in Los Angeles and in Vienna, giving talks in both cities. Click on these links for the details.

By way of an early welcome back, one of my good friends in Vienna, Ula Schneider, sent me a pic of a recent FPO billboard, as if we need any reminding that the anti-immigrant streak continues to run strong in both Europe and the US. As one who celebrates the mash-up of LA and for that matter Viennese societies, the phrasing of the slogans are chill-inducing. "Too much `foreign´ is not good for anyone"...to which I can only say, too little is even worse. Thankfully, in the tradition of red/black Vienna, it has been defaced with the spray painted "schon vergessen?" or "already forgotten?" 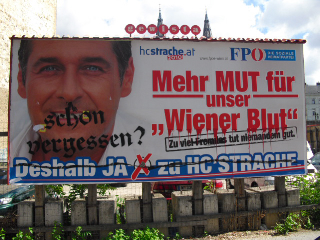 Posted by Dan S Wang at 11:53 AM in lectures, politics, travel | Permalink