I am back from my spring travels. The last leg of my journey had me on a four-day layover in the Bay Area. Two days in the Mission followed by a day and night in Berkeley, and then a day of air travel hassles which dropped me on the peninsula for an unscheduled extra day. Highlights included a catch-up conversation with my friend and host William Noburu Elison, who was just finishing out his first year of teaching at Stanford, and an afternoon of cherry picking out in Brentwood with my dear artist friend and colleague Indigo. Check out her account of the day.

William turned me onto his latest research obsession having to do with the tribal peoples living in and around Bombay, and the interface between them, their societies, and the modern urban media, especially the Bollywood industry that uses the lands inhabited by the tribals for movie making. The trends and tendencies he described sounded urgent and fascinating. Unlike the residents of the now-celebrated Dharavi Slum, the tribals are conventionally not considered an urban people, which imposes a kind of double invisibility—of poverty and of unrecognized contemporary indigeneity. So their legal status, social challenges, and spaces of freedom differ from those of the urban slum.

I shared with him what I’d learned in Beijing from Ou Ning, about his strategies of collaboration with local people living in the thick of urban transformation. I look forward to hearing where William’s work goes.

But what about China, now that I am back?

To take only one topic, the art.

Having spent an afternoon viewing the massive show (226 artists) Reshaping—Chinart from 2000 to 2009 in the basement of the even more massive China National Convention Center, and then moving on from there to the 798 Dashanzi Art District, I have a single overriding impression of contemporary art in China: it is big. Big spaces, big installations, big canvases, big prices, big hype. Oh, and, by the way, it’s big.

The ideas? Well, they are only about medium-sized, with some small and big ones mixed in.

There are exceptions, of course. But very few. Arrow Factory right now and Wang Luyan’s collaborative group Xinkedu from the 90s are both examples of big ideas being worked out in small scale, and very effectively. The mainstream is a different story.

For example, consider the installation by Mao Tongqiang in the Reshaping show. Titled “Land Deeds,” it is a wall installation overflowing onto the floor, made up of framed land titles that were once valid, and then invalidated, and finally over the decades, discarded. Mao accumulated them (well over a thousand) through his travels around the countryside. Anyone with a passing familiarity with China’s twentieth century land reform history would be easily impressed by the idea behind this work: it is about trauma tied to land, its loss and repossession, the abitrary power of a socialist bureaucracy and its vagaries of policy, deafening echoes of the past in current land disputes, etc. There is definitely a decent idea behind this work. Let’s say on the big side of medium. 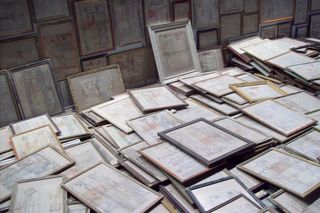 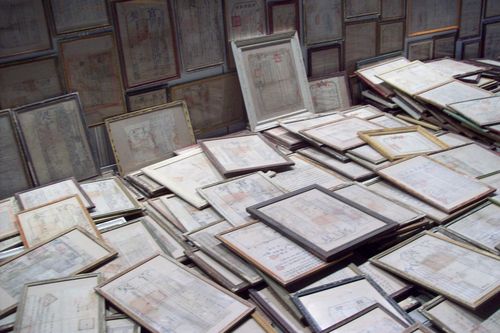 Unfortunately, the art-making strategy, that is to say the artist’s communication through process, material, and finished symbol, is flawed. To put it simply, Mao lets the easy strategy of repetition and pattern dilute the power of a single statement. Part of the problem is the chaos of the presentation, seemingly deliberate but for poor effect. There is an obvious connection that could be made between these deeds and the representation of landscape, but that didn’t happen. Only a huge collection of framed deeds, hung on the wall and flowing onto the floor. Or, if the framed deeds were somehow organized, such that it actually mapped a kind of knowledge or experience as an additional layer to the objects’ self-evident information, the viewer would be given something to contemplate besides the momentary feeling of being overwhelmed by the scale of the project. Again, nothing. This is a major negative precisely because in this show (and at 798, for that matter) the viewer only has to turn the corner to basically experience that same short thrill of being overwhelmed by something big again. And again. The substance of Mao’s idea gets lost in the priority he gives to the aesthetics of scale.

One of my favorite artists, Kerry James Marshall, would often encourage his students to go for the single, uncompromising statement rather than give in to the temptations of compulsive patterning and repetition. It is too frequently a way of hiding one’s voice and message, or lack thereof, in an undifferentiated “drone” effect (his word). In my own work I have tried to follow his advice in avoiding this effect that is so evident as a problem among artists working in China, even if it means working small. As one with those tendencies, I can well imagine the strategy becoming a crutch to those who can afford the space, labor, and material to make big, obsessively repeated work. Add to this the fact that big work is somehow expected, partly because the exhibition spaces are big, and we get a lot of work like Mao Tongqiang’s: good, important ideas made weaker for the sensationalism of scale.

As it happened, I was able to get to SFMOMA to check out Kerry’s newish lobby murals, done in a kind of diptych, on either side of the passage to the museum’s inner galleries. Titled Visible Means of Support: Mount Vernon and Visible Means of Support: Monticello, they are playful, colorful, and big, just like much of the work I saw in Beijing. The difference is, there is no drone effect. Every square inch of the surface is used for a particular purpose, every line defines a discrete space or figure, every figure occupies a position only in relation to other, different spaces and figures. The bigness of the work allows for expressing a more complicated statement, rather than an occasion to thrill through monumental scale. In this case, the statement is about popular history and founding national mythologies, the visual representation of labor, issues of landscape and landscape architecture, and, most timely of all, the depiction of African Americans, and by extension granted through current political circumstances, the depiction of all people of color in public art. I viewed these murals containing both Jefferson and Washington, and they slaves they owned—painted in Kerry’s trademark jet black—even as the new controversy surrounding a school principal’s attack on the darkness of the painted skin tones in a mural in Arizona began to make waves in the media. 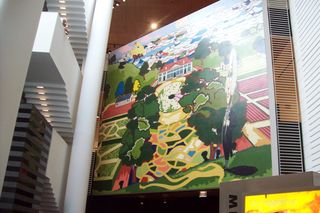 So big work is not necessarily weak. Done well, it can be great. But there has to be a reason for its scale.

I will grant the artists in China the possibility that single, unequivocal statements that do not hide behind bigness are more politically risky, and therefore cannot be demanded of them. The drone effect may be a strategy of message dilution in a context where the authorities cannot be made to lose face. While this may be true, the conditions of art making in China are in part made by the artists themselves. The avant gardes of earlier periods in China made their own conditions of production, exhibition, and dissemination. Now they do it with the help and influence of market actors—dealers, collectors, apolitical curators—who facilitate the prioritization of scale as a novelty factor. I suspect this is larger reason for the prevailing aesthetics of bigness that too often impoverishes the otherwise interesting work being done in China.

One of my big lessons from this trip to China is the difficulties having to do with live translation. I had three different experiences in which live translation was exposed as a serious bottleneck in what were hoped to be fruitful, substantive exchanges.

The first was the conference, on which I have already blogged.

The second was my own presentation before a mixed group of American and Chinese students at the Central Academy of Fine Art. The school supplied one of their graduate students as a translator, but he was clearly overwhelmed going from English to Chinese. His English skills were, as is the case with many students in China, marginal for any real in-depth conversation. About fifteen minutes the fabulous Jing took over. She is very close to 100% bilingual in the complicated language of artspeak. What complicated the proceedings is the fact that I sometimes chose to directly address either the Chinese or American students, in their own language, and then forgot that the other group had not understood what I said. At the same time, my own Chinese skills are not nearly good enough to fly alone without a translator as great as Jing. 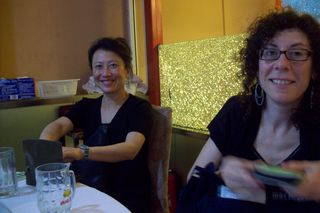 stephanie rothenberg and millie chen, at CAFA in beijing 2010

In this second experience, the simplest problem was the drawing out of time. That everything had to be repeated in Chinese or English, and then often further clarified, made for a slow lecture. It went to nearly double the intended time, and that is after having cut out parts during the delivery. The issues of comprehension and understandability were minimal given the complexity of the ideas and the excellence of the translation, but they were still very much there. 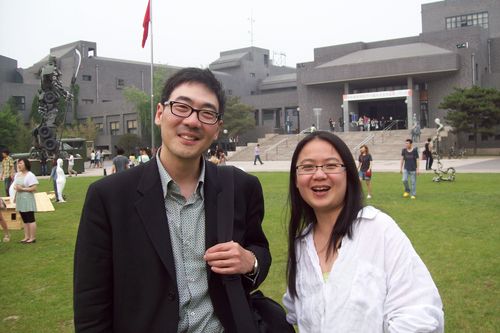 The third was an interview David Parker and I conducted with the artist Wang Luyan, who only speaks Chinese. I had hoped for recording a live translation, but partly because of the time issue and the fact that between David and I, we couldn't perform a really excellent and accurate translation on the spot, about ten minutes into it we shifted gears and went to all Chinese. This then became a problem for me, because even though I asked about half of the questions, I could not fully understand the answers and so had a hard time doing any good follow up. And now we have an 90 minute audio file that we have to sit down and edit, translate, and then record as voiceover. Finally, given the intellectual and precise nature of Wang Luyan's thinking, even as a step removed from the original recording, the translation promises to be challenge. 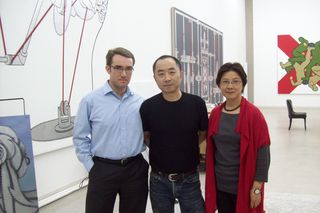 I do not see any obvious ways to deal with the general problem of English-Chinese/Chinese-English translation. Part of the problem is the casualness with which many Chinese project organizers treat the task, often finding translators who do not have the specialized vocabulary needed, and not allocating the budgets for professional standard services. If the non-specialist translator is somewhat nervous or careless, then the translations can be worse than none at all.

What I will say is this, even though it may sound impractical to some: If as many of us actors as possible can take at least a little personal responsibility for learning some of the key vocabulary in our fields, then we could surely help out our assigned translators in key moments. Learning the Chinese for, say, fifteen or twenty terms key to one's own work and positions, might be surprisingly helpful in clarifying a translation in certain moments. Since so many of us agree that the Chinese/Euro-American exchange of art ideas is terribly important, this would be a start to improving the quality of it for all.

Of course, the impoverished translation situation puts the bilingual in a position of serious advantage, the bilingual and bicultural (not always the same thing) even more so. Then there is the whole question of how bilingual. As with myself and similarly Millie Chen from SUNY-Buffalo, who helped put together the class I visited, I have some functional specialized vocabulary, but more on the expression side than on the reception side. And neither of us have functional literacy, which is frequently the case with overseas-born Chinese. 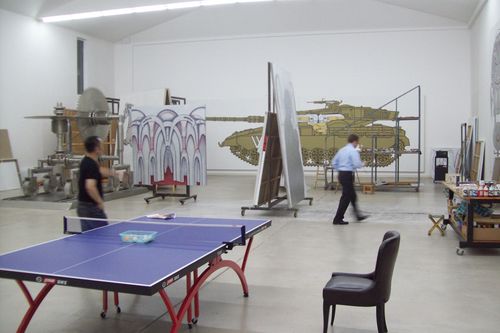 in wang luyan's studio on the outskirts of beijing