It was just about two weeks ago that Nicolas Lampert came to Madison to help me print a new poster. It was his idea. He had been researching antebellum broadsides for his book project and came across an interesting old broadside printed as a warning to African Americans in the Boston area. He mixed up the nineteenth century language with timely information regarding the recent bill signed into law in Arizona by Governor Jan Brewer. 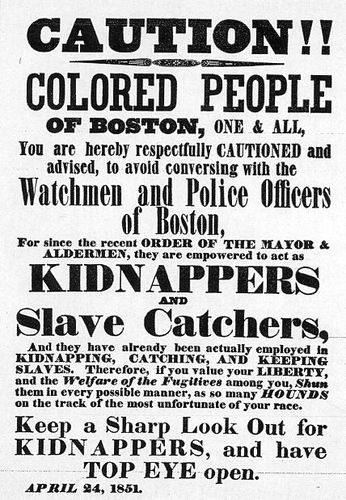 I set the type on Wednesday, proofed and made adjustments on Thursday, and then Nicolas printed them on Thursday afternoon and evening. Christina, the resident apprentice artist of the Propositions Press, helped with the printing and disassembled the form and distributed the text afterward. Without the two of them, this would not have gotten done before me leaving the next Sunday.

But here it is. I forget how many we printed. Something like a hundred or thereabouts, on two different papers. 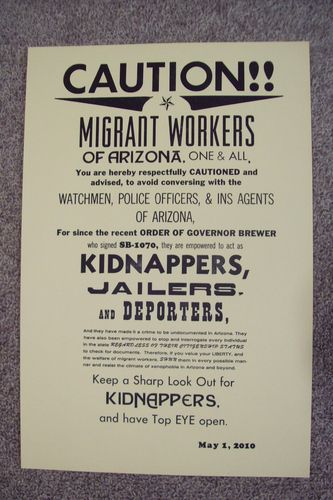 'caution!!' poster, based on an antebellum broadside
I brought with me about ten of these posters on the gold paper. I did not bring them to China on purpose, but rather for them to be shown and sold at the Pop-Up Book Academy event I will be doing on 6/4 in San Francisco, the day after I return from Beijing. They are just along for the ride.

and how is it you can compare people running away from a crime to those commiting one.this slow motion invasion of the united states of america must stop.

And I ask you, how is it a crime to "look like" an undocumented immigrant? And if it is not, then why should a cop be allowed to stop you? Hm, Mr. Freedom, can you please explain?

it is a crime to sneak into another country,when 40 million people do it,it is a invasion,there has been a federal law on the books for almost as long as this country has been a country stating that you must be able to prove you are a citizen whenever a police officer stops you for anything,including a speeding ticket,you must show proof of who you are when you get a job,cash a check or even go to a hospital,these illegals are demanding their right to break the law,they are demanding special treatment,but you don't seem to understand this,why don't you sneak into mexico and see how your treated when you tell the local police that you don't feel the need to show your ''papers''..............

You didn't answer my question. Why should a police officer be allowed to stop somebody for "looking like" an undocumented immigrant? Not for a speeding ticket, not for any violation, not for wanting treatment at the hospital. FOR "LOOKING LIKE" AN UNDOCUMENTED IMMIGRANT. Explain. If you can't on the second try, then I guess you don't have an explanation.