art and crime in beijing

When I come to China I am always struck by how safe the streets feel. Of all the places I’ve been to in China, and walking the streets at all hours, I never get the Fear like I always did when living my years in, say, Chicago. Nobody is going to suddenly pull a gun on me, demanding cash and a wallet—this simply does not feel like a possibility. It also seems that women feel pretty safe walking alone at night in the cities. The threat of violence from strangers seems much less a factor here than in the US. I have no statistics or studies; it is just a feeling, but borne out by observing the relatively carefree behavior of people out and about. And knowing that I move about without the same look-over-the-shoulder caution I always have late at night when in Hyde Park.

That said, there are dangers of scamming everywhere in China. On this trip, the very first person I talked to, whom I took to be a legit cabdriver because he was standing with the official drivers at the airport taxi queue, turned out to be a scam artist. He asked me if I needed a taxi, I told him where I needed to go, we negotiated a price, and he grabbed my bag and headed out of the queue. That’s when I knew this was not right. And he was in a hurry, running to a van that pulled up. I questioned him, he reassured me. A guy got out of the van, and he took the driver’s seat. We took off and within three minutes stopped at a gas station very close to the airport. Another van pulled up, with a young man and a young woman in it. My guy got out to transfer my stuff to the new vehicle. That’s when I demanded that he take me back to the taxi queue. He tried to convince me that the young driver was his son, but knew the jig was up when I was adamant. When I made it clear that I'd soon throw a major fit and get physical, he shuttled me back to the proper place. So I got back in line and ignored all further offers of rides until I actually reached a taxi. That first guy went back to scamming others, right behind me.

So the standard crimes in China—and what visitors and residents alike need to know about—are petty scams that have you giving over cash willingly, only to be second-guessing yourself later on, and finally realizing far too late that you’d been taken for your hard-earned money by some smooth talking and sympathetic seeming performer. These scammers exist in the US, too, of course, but seem to be less often encountered, at least not on the street. I think most Americans who turn to petty crime are simply less willing or able to use their wiles and end up stealing outright. (I am not talking about the white collar fraudsters, whom I do not really consider ‘petty.’) There is something quaintly performative about the scam.

So I loved the current project, Public Service Announcement—The Art of the Scam, up at Arrow Factory, a tiny storefront project space about halfway down the alley Jian Chang Hutong, near the Confucius Temple in the northeast center of the city. They have two monitors running looped videos all day, facing out on the street. The local public security bureau provided the videos. They were made by a media and public education branch of the police. They feature actual scam artists performing their best lines, with voiceover from the narrator, with the purpose of educating people about the typical schemes used by these cheats. 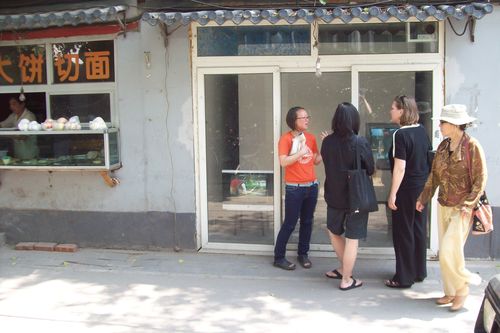 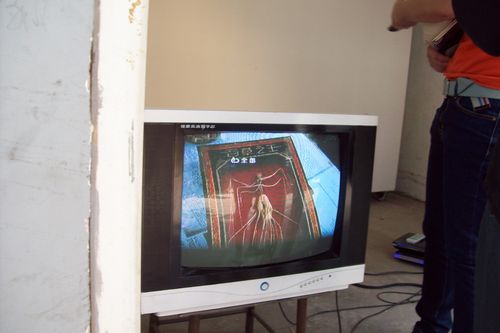 Rania Ho, one of three principals of Arrow Factory, along with Wang Wei and Pauline J. Yao, speaks about the project and how it came about here:

The project made me think about a conversation I’d had once with my fellow keyholders-to-be when Mess Hall was still nameless and just coming together. I expressed reservations about operating a space that subscribed to any kind of political orthodoxy. I wished, whatever Mess Hall would become, that it remain open to all arguments for hosting projects by people or entities with perceived political differences. Given the politics of those involved, as an extreme example, I suggested that I could entertain a project proposal offered by an anti-abortion group. Not least for the simple reason of better learning how an anti-abortion group operates.

The hypothetical situation never presented while I was an active keyholder. But at Arrow Factory the situation of working with an entity that might conventionally be thought of as an antagonist, or at most a presence that exists in a situation of mutual tolerance, here becomes a friendly exhibition partner. The best part is that the relationship grew organically out of a neighborhood milieu, and came to fruition with neither a compromised integrity on the part of Arrow Factory nor a resort to brute imposition by the police. It is new media, law and order, community service, cultural experimentation, and collaborative art all rolled into one project. Everybody gets to be who they most want to be. By no means is that an easily achieved result given the divergent experiences and agendas of the players involved, but shared membership in a human-scaled locality is a foundation that makes it possible.