then, onto the buck dinner

As the People’s Movement Assembly wound down we were directed by new friends to this annual event called the Buck Dinner. Which, again, just happened to be taking place that weekend. It was described to us as a Detroit progressive fundraising tradition. Beyond that, we had few details. The several people who recommended the dinner simply urged us to go see it. Some of us, including me, were feeling pretty wiped out after the PMA. The last thing I wanted to do was to go to another meeting and listen to another procession of speaker, leftist or not. One of our contacts in town, Adele Nieves, had been thinking about evening activities for us: art openings, dancing, dj nights, etc. We say, “What about the Buck Dinner? That guy over there says we should go…” And she says, “Oh, yes, go to that. Definitely go to the Buck Dinner!!” So it was settled.

Turns out the Buck Dinner is a remnant ritual of the Old Left, having been first staged in 1930 and every year since. Even as of a decade ago it was still an event to which only socialists were welcome; the anarchists were turned away. How it works: It was held in a big union hall, filled with folding tables of the long kind, in a grid of probably 8 rows x 10 files. Each table had a name card on it denoting a sponsor or “headhunter.” That person is responsible for bringing in their own guests, and providing a spread of appetizers. So there were different spreads of great food laid out between every so many tables; some headhunters sponsored only one or two tables whole others had their name on four or more. The headhunter collects donations from their guests. That money goes to the pool, out of which grants are made to local progressive and activist groups and projects, and to the coffers of some progressive candidates for office, too. You get a feel for the range of causes and groups by the different banners hung around the hall. 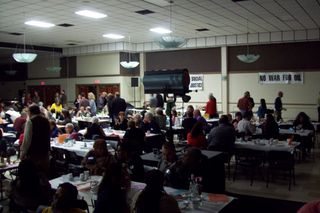 There were probably at the very least 400 people there. The proceedings included an hour long performance by a singing and acting troupe that played live acts from an old socialist radio show, that, I guess, used to actually air in the Detroit area. The singing was terrific, and the skits were all historically-based. This was truly the conscious working class reproducing its own culture and historical self-awareness. And I must say, all that happened in the Thirties, with the bankers and so forth, sounds so relevant today. At one point during the entertainment Amy Partridge turned to me and said that she had no idea that this kind of progressive culture was still extant in America. None of us visitors did. 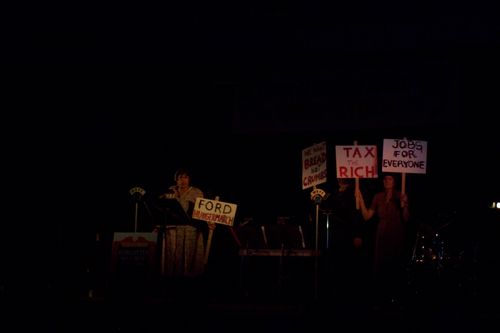 The first Buck Dinner brought into seamless continuity the working class consciousness and the Michigan deer hunting tradition. Supposedly, lawyer Maurice Sugar and a group of labor activists turned a bagged buck into an opportunity to rasie funds and socialize, hence the name. The thing is, from the beginning, partly for reasons of tradition and partly for reasons of security, attendance at the event is by invitation only.

So we crashed the dinner. It took a little gutsy sweet talking, but once people got the story on us—being from out of town and visiting for the PMA—we were brought right into the party. We even found welcome at a table that a headhunter had been unable to fill. We sat at the table of Ronald D. Glotta, a longtime Detroit labor and civil rights lawyer. It worked out great; we happily made our donations. And we even ran into what by then felt like old friends: Rich and Bill (who, after running into me at both the panel on Friday and then at the PMA, marveled at the way we seemed to insinuate ourselves into everything leftist in cities strange to us), and Julie from the Labadie. Ron Scott, who we loved from the Friday night panel in Ann Arbor, was at a neighboring table. We got to give props in person, and while we were getting down on the introductions, I mentioned that the reason we made it to the panel was because we’d been reading issues of Inner City Voice at the Labadie. Then he says, “So you’re into Detroit radical history? Well, do you know who this guy is? Have you ever heard of the MC5?” And he grabs by the arm a tall, goateed fellow who was right then walking by. “You ever heard of John Sinclair?”

Oh, shit. More introductions. We were deep into it now.

I actually had the presence of mind to tell John Sinclair that I own a signed copy of Guitar Army that I bought at Maximus and Co. Booksellers in Birmingham, Michigan. And it was a good thing I did, too, because I think I may have blown his mind. He looked at me in utter disbelief and said “That was a long time ago!” You see, Maximus must have closed its doors in, oh, probably 1985. I said to him, “Hell, yeah! I was sixteen years old! The book changed my life!” Maybe an exaggeration...but, well...not really! Afterward, Rozalinda reminded me that in the right light, when you can't see my gray hair, somebody–especially somebody twenty or more years older than I–might think that I was only 30 years old. 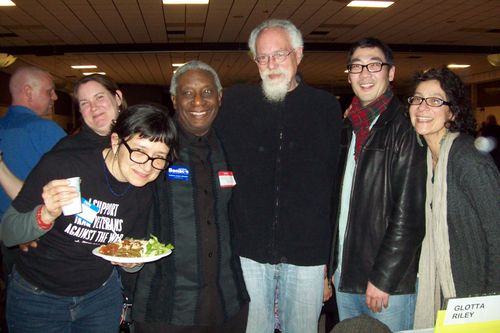 with ron scott and john sinclair!

Later the socializing turned into lazy pleasure, with Sarah, Amy, and Rozalinda chatting up Julie’s activist sister Elena Herrada, and me getting acquainted with others around me. Brian and Claire found some old-timers at another table.

We all left the wealthier in relationships and connection with history. Rich at one point said to me that the Dinner is great, but old. An old form for the old society. Knowing that the parking lot outside was full of private cars and that our long term future will not include such things, was indeed a reality check. Nonetheless, the Buck Dinner was in our estimation strong evidence of why capital has fled Detroit. The working class is just too damn bad ass there.

We ended the night at an art opening in this enormous old factory complex known as the Russell Industrial Center. I had not been in any art setting like it since visiting the massive Fontanian studios in the New Territories of Hong Kong; others from our group said that it reminded them of old factories taken over by artists and squatters in Europe. As impressive as the disused factory buildings are, the art exhibition was, to be generous, conventional; and to be critical, it was lame. Not only were they charging a cover fee for entry, but the art work visible from the entrance was so bad that Rozalinda and I didn't even bother going in. Claire talked the gatekeeper into letting her take a quick run through for free, since she gave up all her cash at the Buck Dinner. I spoke to a couple of people who'd just gone through and they didn't recommend going in. It was a given that our run of interesting and unexpected events would soon end. It was just all too predictable that the streak would run dry with a mediocre art show.

Guitar Army forever!  I remember reviewing your copy from highschool when I was out in Minnesota visiting you and the now-wife.  Great to hear you still have that book!

I remember you buying your copy of Society of the Spectacle at Maximus!

Really?  Did I really have that in high school?  Because I never really read it until summer of sophomore year in college.  Anyway, it is still my favorite book of all time.

yes, Ron Glotta. The same man who refuses to pay his own worker's a livable wage all the while paying family members whom don't work for the firm a paycheck and at a higher pay rate than the people who do work for him.

If you're lucky he'll pay you 10 bucks an hour but then he expects you to learn how to be an IT person and paralegal (which both make 40k minimum to START). He'll expect overtime without pay (we're fighting the man speech will come shortly after) and you'll get the "I can't afford to pay anything more" speech even though he's the one who puts on the Big Buck Dinner and donates money to local politicians.

He's had worker's with back problems but yet he places the heavy files on the floor.

He has flat out said that when minimum wage is uped he will only pay that and nothing more.

Just funny that the things he claims republican and the right are evil for Greed, not giving a shit about your workers, hoarding of wealth he is. Wolf in sheeps clothing and danger to the movement.

Oh did I forget to mention that he 1099's his workers? He knowingly mislabels employees as independent contractors so he doesn't have to pay into Worker's Comp, Social Security, and health benefits....the very thing he goes after companies for.

I don't know Ron Glotta except through that brief encounter. I am familiar with the sleaze factor in Michigan labor politics and the egos on the activist scene so I do not discount what you say. But if you have some hard sources for the negatives you've thrown down, that would bolster your characterizations of the man. Do you have any?