Not much time to rest after KC. The next week we were off to Detroit. For me, it was the third time in nine months. The “we” were Brian Holmes, Sarah Lewison, Claire Pentecost, Rozalinda Borcila, Amy Partridge, and myself. The trip proper started from Chicago. Sarah came up all the way from Carbondale and I from Madison, of course.

We traveled in two cars. Claire, Brian, Sarah, and Rozlinda in one. Amy and I in my car. We departed on Friday morning at around 9:30 AM, after a quick check to make sure everybody had their passports with them. We didn’t use them, but you never know when you might want to scoot across the border to Windsor. For dim sum, if nothing else.

Coming from the west, stopping by the Labadie Collection was the obvious first thing to do. I have said this before: for any leftist or radical researcher or history buff (and what radical isn’t a student of history), this place really is a must-visit. The thing is, you must go with some idea of what to request, otherwise there is just too much, especially on a first go ‘round. Well, I certainly had some ideas. I wanted to see Dodge Revolutionary Union Movement (D.R.U.M.)-related publications and ephemera and a late Sixties/early Seventies radical black paper from Detroit called Inner City Voice. Inner City Voice and D.R.U.M. were contemporaneous expressions, and I was curious about how D.R.U.M. and the League of Revolutionary Black Workers were covered in the local radical press of the time.

Julie Herrada, the gracious and super knowledgeable curator of the collection, took the time to introduce all the others (this was their first visit) to the Labadie and how it works. Claire and Sarah ended up studying original copies of Mother Earth, while Amy delved into a portfolio of daily newsletters called The Punch Press, produced by and for the striking laborers of the 1937 Flint Sit-Down Strike. Those were amazing. Apparently produced everyday or nearly so, they are a moving document of organized and creative working class culture. Not only are there strike news items told in the language of outrage skewering the Fisher Body management, but also notices for union dinners complete with menus, reminders for social events like dances, and funny little hand drawn graphics. Judging by The Punch Press, the striking workers had some joyful experiences in their togetherness, even as they engaged in militant struggle and took life-changing risks.

You may enjoy excellent scans of what appears to be the full run of The Punch Press right here. 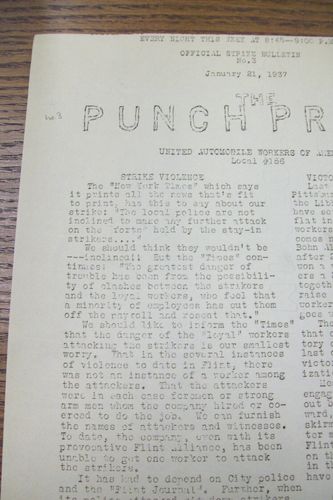 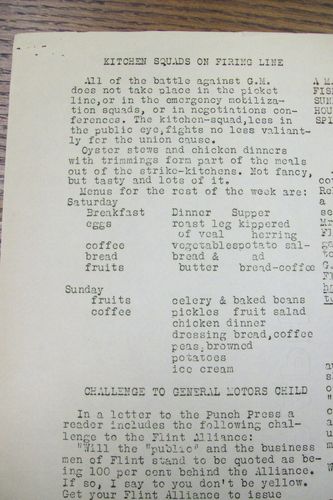 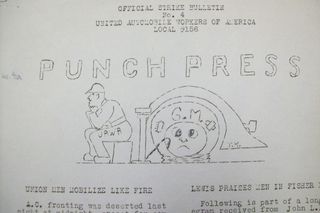 Julie hooked me up with all the materials I could possibly digest. Particularly interesting was a D.R.U.M. publication titled “The Midwest and the League.” The opening article was about the black revolutionary workers movement and the regional particularities of the industrial midwest, from an early Seventies perspective. There was also an interview with one Mike Hamlin, evidently one of the founders of the League and a main activist in D.R.U.M., and, furthermore, one of the editors or main writers for Inner City Voice. The design is subtle but clear, with a minimum of graphic elements, very readable layouts, and a choice of display text that maintained a uniformly militant tone. Designers of radical publications today could certainly take a lesson from this pamphlet. the midwest and the league 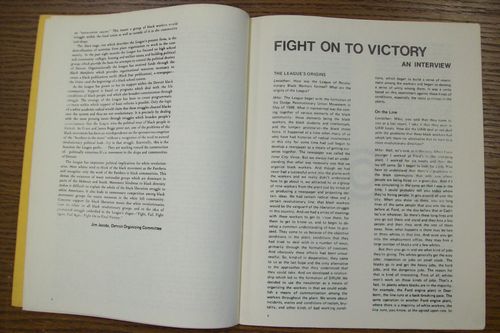 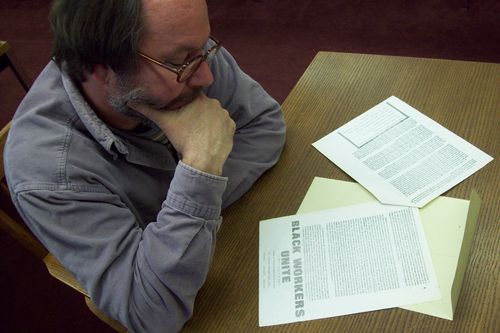 fredy perlman's not the only detroit-paris connection!

Then, the serendipitous began. 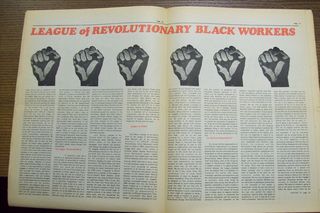 Julie, who kept checking in with us because of her curiosity about our impressions (and seeming to like having the opportunity to reacquaint herself with some of the holdings through our fresh eyes), mentioned that there happened to be a conference going on that day and the next, and that Mike Hamlin was scheduled to speak. Wow. We printed out the conference schedule and decided it was too good to pass up, especially since it was free and held right there on the Michigan campus. We resolved to attend the Friday evening panels, of which there were two. 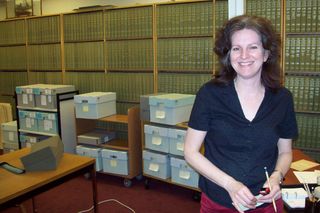 So after a cheap dinner in the student ghetto, we made it to the Labor and Economics Panel and, after that, the Movement Panel: What Is “IT”?, the “it” being the “it” in the conference title: Take It Back, Bring It….

Mike Hamlin was on the first panel and he was intense and excellent. I could sum up his fifteen minutes by simply quoting him: “I was a revolutionary then, and I am a revolutionary now.” Yup. Dean Baker was pretty good, too. Arturo Rodriguez spoke about farmworker organzing back in the day, but was mostly quiet during the discussion segment. The drag of the panel was, unfortunately, the youngest participant, a Michigan student named Yousef Rahbi. He was introduced as an experienced student activist, but most of his exhortations fell into a category of sentimental idealism that bordered on the embarassing. For example, he urged those in the audience to dispense with ideological thinking and keep utopic visions in mind when acting in the day to day by remembering “the beautiful scenes…of dogs and frisbees, people really living.” I kid you not. Where are the young radical lions I have known, the Emily Formans and Daniel Tuckers of today, when you really need them? Because Mr. Rahbi wasn’t it. 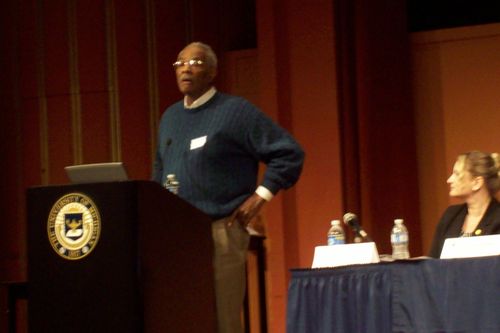 mike hamlin @ take it back, bring it forward conference

The second panel was much better. Al Haber, from the original first generation SDS cohort, presided. Rich Feldman from the Boggs Center sat on the panel and was awesome. His longtime friend and our Chicago pal Bill Ayers was on it, too. Ron Scott, former Panther and now doing Peace Zones for Life activism in Detroit, kicked butt. He put on a clinic for how to stay rad while embracing new complications that blur the old lines of antagonism, say for example, between cops and inner-city residents. Bob Zellner, who was active in SNCC, gave an inspired presentation. I really hate to say it, but again, the weakest presence was the youngest person, a woman who had done much for Michigan Peaceworks, Laura Russello. She chose to speak about therapy and wellness for activists. Yes, important, but not all that relevant on a panel about movement lineage, inheritences, and innovation. It could have been analytical, with something to say about how movement work can be disfiguring, but her treatment was rather superficial, I thought. As well–maybe we got a skewed sampling since we only attended the one evening session, but the panel composition was awfully male. Out of ten contributors there were only two women. What is up with that?

But it was worth attending. It was fun to see Bill Ayers in a non-neighborhood context, and Julie ended up going, too. And Sarah Lewison recognized Peter Linebaugh sitting in the row behind us. He is a radical historian who teaches in Toledo but lives in Ann Arbor. Our colleague Brett Bloom met him at some event in Europe and turned on the rest of us to his lectures online. So we got to make his acquaintence, though I’m not sure he knew what to make of four of us mobbing him all at once. All I can say is, it could have been six.

Anyway, we were off to Detroit after that, for a late night arrival.

The main feature of the next day was the Detroit People’s Movement Assembly, held at the Central United Methodist Church. There were probably about forty-five or more people there. Maureen Taylor kicked things off with a rousing welcome, an impassioned and downright furious condemnation of the latest DTE disaster, in which a family whose heat had been cut off by the utility suffered a deadly fire when they were forced to turn to space heaters for warmth.

There was some general USSF stuff discussed, but mostly it was very Detroit-centric. What I mean is, most of the time was spent on short presentations by four activist initiatives already underway with actions timed to coincide with the influx of USSF activists in June. After the presentations, we broke into small work groups around each of the four campaigns. There were worksheets provided that had outlines and blank lines for strategy, target, message, action, etc. This part of the PMA was clearly an organizing session, but which was open to anybody who came to the PMA, not only including but especially welcome to the out-of-towners. Here is some footage from the PMA, this bit featuring Steph Guilloud of Project South.

Thanks for the glimpse of this world.  I wonder if the pressure on US workers could be reduced by free access to the uncensored Internet in the parts of the world where it is not available, such as by satellite transmission.  With more power in the hands of people in those regions, they would be in a better position to negotiate with their paymasters, lessening the price pressure on U.S.-produced goods and services.

The answer is yes, it probably would. And not just anywhere, but mainly in China. No facebook, no youtube, and maybe no google?? Quite a different cyber-universe, and controlled in ways we can hardly get our heads around.

But the access wouldn't necessarily increase the organizing, as that happens already. It would be about media exposure, which still has its limits in terms of political effect.