I get a long break from teaching from mid-December until after the MLK holiday. Though it is a break from commuting, it is not usually a break from traveling. In addition to our holiday travel for family visits, I did a mini tour of the Midwest in the early January. I went from Madison > Chicago > Ann Arbor > Detroit > Urbana > Chicago > Madison. In six days of cold, wintry driving.

My occasional traveling companion and frequent collaborator Mike Wolf, who himself had an earlier leg that brought him in from a West Coast trip by air, and then carpooled his way to Madison, joined me for the circle tour until I left him in Urbana. We were there for a gathering of Compass art-activist-researchers, to discuss present and future work together. I left the merry band late on a Saturday, at midnight with the temps hovering between -4 and -2. Fortunately, once on the empty highway I found a strong signal carrying the Dr. Laura show. It had been a few years since I'd had the opportunity to enjoy her and her procession of self-flagellating callers. My heart was warmed. Had the outside temps approached positive double digits, I probably would have gotten too pissed to listen. So it worked out.

The Detroit excursion was a reprise of last summer’s venture to the Allied Media Conference. This time we had an encounter set up beforehand:  a discussion and meeting with Grace Lee Boggs and people from the Boggs Center. It was quite a productive and inspiring experience, and set in motion various efforts that will occupy me, probably Mike, and a number of other Compass collaborators for at least until late June, when a few tens of thousands of people will converge in Detroit for the US Social Forum. Mike and I both typed out some thoughts on the meeting while the impressions were fresh. They will be published in Red76’s forthcoming Journal of Radical Shimming #10. Stay tuned for a lot more on Detroit and what we’ll be doing there.

Other than that, it’s been a couple of weeks not only in town, but hardly leaving the house. Of course, Messy the Cat likes having the near full-time company. 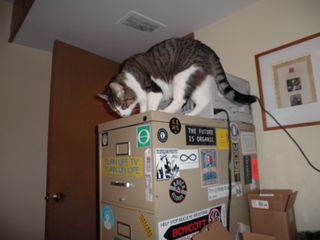 Messy the Cat (loves it up near the heat register)

Like all of you, I’m sure, I have a long list of rainy day/cooped-up projects. I managed to get to exactly two. One:  designing, setting, and printing some letterhead for Sarah, which I’ve been promising for about three years. I’m halfway through the printing. And two:  cleaning and putting into usable order a bucket of woodtype handed down to me from the artist Dan Peterman. This is some special stuff. Not only is it excellent in the way that all woodtype is, but this particular stash is from before the now-legendary fire that devastated the building now known (and loved) as the Experimental Station. Dan did not salvage much from that disaster, but he somehow managed to grab this type out of the rubble and ash, dump it into a five gallon bucket, and threw into a corner somewhere and let it be for another seven or eight years.

I think the first thing I print using this type will have to be for the Experimental Station. Mixed in with the type were these old anti-Nixon buttons. Fun!

some of the that old type, cleaned and put into order

Getting out of the house during these stretches of homeboundedness is not easy. The house is so comfortable, cooking, reading, writing (deadlines, as always, looming), and plus, there isn’t that much to do in town besides getting in a good walk. Still, it was worth getting my butt out to this event that was held at the Central Library, Taking Stock of Race and Racism: A Year after Obama's Inauguration. The event blurb said

For a panel discussion, it was actually pretty good. Joy Cardin from Wisconsin Public Radio did an outstanding job as moderator, getting the audience fully involved and keeping the conversation rolling in a room of about forty people. 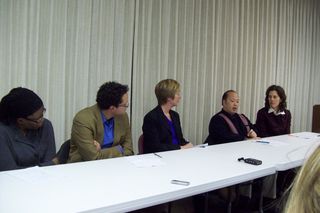 panel discussion: not too bad, for a change

But onto the substance. After the loss of Ted Kennedy’s seat and now the appalling Supreme Court decision regarding corporate money in campaign finance, we need to be having a conversation not only about Obama’s performance in relation to race and racism, but really in relation to the competing visions now in play for the future of America. Center-left Obama himself is so mild in what he’s offering as a vision, and the Right is so committed and extreme in its vision, that the Left finds itself again on the outside looking in, watching a one-sided battle take place while we put our energies into single issues, local initiatives, and non-electoral efforts.

The problem I see is, the Left has abandoned the electoral terrain about as quickly as it engaged it. We weren’t able to hold our noses for long enough. This is especially true of the young and the minorities. Those two groups did not show up to vote in Massachusetts. By itself, that is not terribly surprising or even discouraging, since in Coakley they had no strong reason to defend the seat. The problem is, the young and the minorities, led by the African Americans, did not seem to be engaged starting from right after the election. Was it a classic case of co-optation by the Obama campaign? If not, then what accounts for the young and the minorities dropping the ball on self-organizing, independently of the Obama campaign?

Plenty to mull over.

csa's getting started in china

Madison is rightly recognized as one of America's best towns for locally raised foodstuffs. Many of grocery and produce stores carry and mark local foods. Many restaurants do their part, and the farmer's markets are very good. The cheeses made in the towns around here are incredible, and there are more and more local meats available. The availability is such that we haven't seen the need to subscribe to a Community Supported Agriculture (CSA) farm, what with our own garden factored into the equation.

The local food culture here stands in contrast to the heavy chemical agriculture of China, and the complete lack of food origins labeling in the produce markets I strolled in various Chinese cities. It can be somewhat depressing, especially knowing the obsession with food freshness that most Chinese people profess. So it is good to hear about more responsible practices happening.

Several years ago I attended a presentation by CROPP brass upon their return from a tour of organic farms in China, and that was inspiring. Now I'm reading about farms implementing a CSA model, in order to make smaller scale diversified farms economically viable. One of the main advantages of the smaller scale is not having to invest the chemical inputs that larger, single crop farms demand. Even if not fully organic, these efforts seem like an important step toward re-localizing, and putting the consumers back in touch with the people who grow their food. This needs to happen all over the world. Two, three, many Madisons?

dick, we know your xmas wasn't as great as you wanted it to be

It's been a long while on this blog since I've weighed in on national political matters. But I must add my voice to the outrage over Dick Cheney's attacks on President Obama. This guy Cheney really is a piece of work. A jetliner coming in on a transatlantic flight is targeted by a lone would-be suicide bomber on Christmas Day and all he can do is attack the President. He is more concerned with grabbing power for the ideological wing of his party than for the safety of this country. (Is there any non-ideological element left in the Republican Party??)

I won't recount the dozens of ways that Cheney and Bush weakened our country, and rained terror on hundreds of thousands of perfectly innocent people in Iraq and elsewhere. That's not even necessary. Suffice it say, everyday Dick Cheney remains a free man is an affront to any reasonable sense of justice. He and Osama Bin Laden belong in the same cell.

Dick Cheney, warmonger and power-hungry hater, wishes and hopes for a successful terrorist attack on America. His xmas (that's correct, Lynne, it's xmas) was ruined by a quick-acting Dutchman. We thank Mr. Schuringa, for saving lives, foiling an attack, and disappointing our traitorous ex-veep.