report on the hamilton wayzgoose

Mister Koppa and I made the trip to the first ever Hamilton Wood Type Museum Wayzgoose. 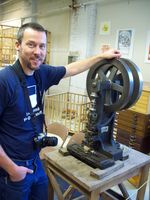 What’s a wayzgoose? Back in the day it was the end of summer bash thrown by the master printer for his shop underlings and apprentices. And now, I guess, it’s the kind of event the Hamilton staff put together for us–“us” being a gathering of type nuts, artists, letterpress printers, typographers, graphic and type designers. About 50 were in attendance. Mister Koppa and I were just about in the middle of the pack, age-wise. It was good to see so many young people turning out, seeing this as a living thing.

We were treated to power point presentations by Rich Kegler and Juliet Shen on the first evening. Juliet Shen told the story of working with Pugent Sound Salish tribes to design a font for the preservation and continuation of the Lushootseed language, which is down to ten or less native speakers, and having the font cut as a new wood type by Hamilton. 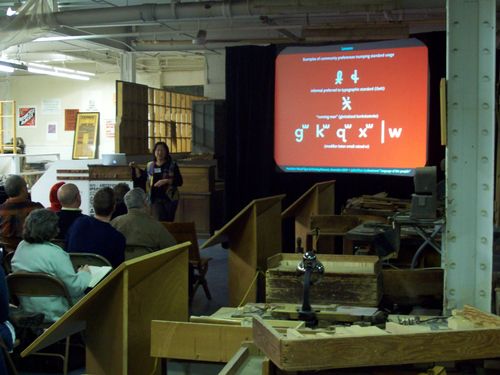 She had an elegant explanation for why she approached Hamilton about producing a new face in wood type, and in a language that does not use the straightforward Latin alphabet. She said simply, working and printing in wood type is better for getting the young people interested in learning to read, speak, and write in the language.

The second day was organized around four different presentations, including a demonstration of the pantograph router by Norb Brylski, one of the old-timers from the Hamilton workforce. This man was a printer with his own shop first, and then after leaving that part of the trade spent years cutting wood type faces for Hamilton, in time becoming a master of the pantograph router, understanding all the nuances of the tool. This tool, in which the pantograph is machined to such a quality of stability and precision that it can be attached to a router run on pressurized air, was at the heart of the Hamilton production of wood type, and one of the main reasons decorative faces could be produced cheaply enough to be used widely in commercial printing.

All throughout the demonstration people got to ask him questions. Most were of a technical nature. Paul Aken asked him about the shoulder height and depth of the counter (sorry, those are cast type terms). I asked him how they measured the productivity of each pantograph operator. He said that management had figured out a standard of output, so many fonts in a given face in a given size in a given amount of time. I can’t remember if he said it was all charted out or not, but that’s how I’m picturing the information. The reason this is crazy to think about is, this was a pretty skilled kind of work, including having to cut by hand every single inside corner to a sharp angle for many faces, because the router bits all leave a round corner. Quantifying all that across the room full of pantagraph operator-craftsworkers, such that the information could be figured into larger decisions regarding the future prospects of the company, was probably a typical industrial efficiency problem for the time. I think it was one of the Moran brothers who noted that over the decades there had been a great many women in this occupation. I also asked Mr. Brylski if he was in a union. He was; I think he said it was the carpenters and joiners union.

Richard Zauft, under whom I studied about thirteen years ago, led a hands-on print session using for the first time the newly unveiled Hamilton face, Carter Latin, the first typeface designed by Matthew Carter for wood type. Matthew Carter has done just about everything a guy can do in the field of typography and type design, but it turned out he hadn’t ever designed for wood type. So this, too, was (for type nuts, at least) a pretty special moment, and super fun to do. Hundreds of proofs were made over the course of the day, including many on paper taken from a shop scrap pile, with entertaining results. Matthew Carter was there, presiding like a pleased patrician grandfather. 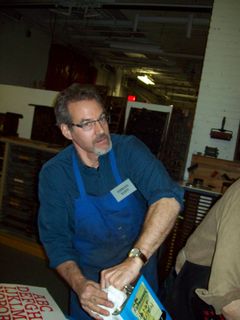 Jim Moran gave us a wonderful introduction to and status report on the recently acquired inventory of printing blocks from the old Globe company of Chicago. I don’t know what the proper name of the business was. It might have been Globe Print, or Globe Printing, or Globe Show Print. They were in the business of letterpress printed advertising. Movie posters, rodeo, car racing, and circus posters, and signage for grocery stores and small retailers.  And some political signage, including a lot of blocks for the old Illinois US Senator Dirksen. I’ve never seen anything quite like this, in terms of a fusion of material and social history. Who were these people in the 40s, 50s, and 60s who were going to rodeos, circuses, and scary movies? The whole thing had the air of a healthy working class world, with its own amusements and nascent consumer economy. Jim made the point that some of the circus posters that feature clowns are actually quite sinister, with the clowns playing as figures of chaos and menace. So what was life like for the classes of citizenry who consumed the thrills and contrived scares of the circus midway and freak shows? Who shopped at the stores that advertised their meat discounts in the windows? And whom Senator Dirksen wanted to reach? Lots to wonder about there. Unfortunately, not much is known about Globe. Jim is starting to get some leads on the company, people who may have been involved, but it sounds like that is in an early stage. 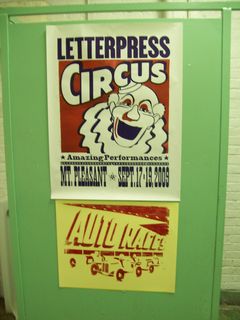 The Hamilton staff and volunteers are slowly making their way through an estimated 1400 blocks, many of them damaged, and all of them having arrived in a completely disorganized state. The story is, the Globe company cleared them out and packed them for storage, but then they were somehow left in a tractor semi-trailer for 25 years, and practically forgotten. A whole bunch of type came along with it that they are also sorting. Some of the blocks are just amazing, and the proofing of them is what is a great motivation for putting in the labor.

Most of the blocks are carved or cut vinyl. But check out this one, which is pure woodcut, handcarved. 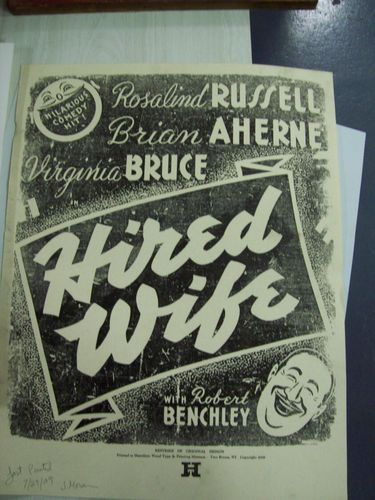 This place is the mecca of wood type, no question. For the letterpress printer, there’s interesting stuff at every turn. 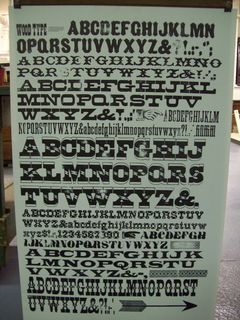