With our hotel room assignment, the trip to Detroit began on an auspicious note. 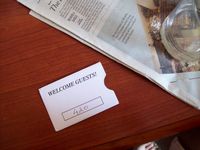 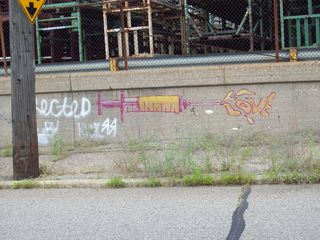 the syringe of love
After all, love is the drug.

My three days there ended on the celebratory and very inspiring occasion of Grace Lee Boggs' ninety-fourth birthday. There was a party attended by a couple hundred people, and a celebrity appearance by actor Danny Glover. Glover's interest and commitment to political activism is well known, but I had never actually heard him speak at events of an activist nature. Although this was a birthday party, and Glover filled his turn at the mic with accolades and warm wishes for Grace, he also went on a terrific rant, rendering the low-powered mic superfluous. 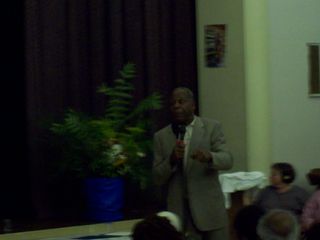 danny glover @ grace lee boggs' party
Grace herself was seated in a wheelchair. She seemed to be absorbing the remarks of well-wishers with quiet satisfaction. When she finally spoke, she made much of the community in evidence in the room: multiracial, intergenerational, full of life and love.

I could not get close enough to Grace for a good pic. The hall was just that crowded. 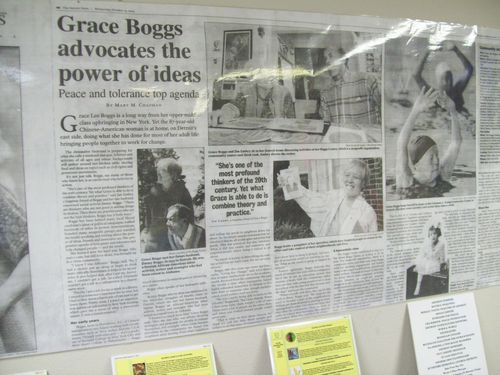 she is an inspiration!

a prayer for tamms: people and faiths come together

Here is video of a very moving event in Chicago organized by religious leaders and the Tamms Year Ten project. What to call it? A demonstration? A service, a rally, a vigil? Maybe it was all of those things. No matter, it is another reminder of what Tamms is:  a living hell that we have the power to eradicate.

The old abandoned buildings of Detroit have been ignored for so long that the skin of the city has gained a kind of antiqued patina. The brick, metal, wood, and stone have been subjected to weather, human neglect, and ruin, in many cases for decades. Like the ruins of an ancient civilization, Detroit’s cityscape clearly says an age has passed. Whereas once the cityscape screamed pain, now a quiet classicism has begun to set in. By contrast, I cannot imagine the ruins of Phoenix—as inevitably there will be a ruins of Phoenix—ever attaining a beauty. I may be wrong about that, or maybe I am just too much a creature of the twentieth century, but the vinyl siding and brittle fiberglass of so much sunbelt construction just doesn’t have the material longevity.

I only attended a few of the official conference events. Those were one of the three official tours of Detroit, an advance screening of the new Yes Men movie, and the closing plenary, which was less that than a short rally-the-troops screed by Andrea Smith followed by a litany of thank yous by the conference organizers and the a bevy of young mc’s taking turns at the mic.

(Short review of the Yes Men movie: go see it when it comes out in the fall, it is entertaining.) 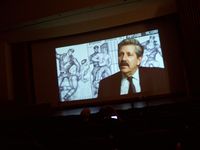 The tour was excellent. ‘Past and Future’ was the theme. We stopped by two car factories, including the vast ruins of the Packard plant, and then an urban ag project, a self-sufficiency/social space project headed by journalist-turned hands-on organizer Mike Wimberly, and a quick drive by the Heidelburg sculpture/public art lots. 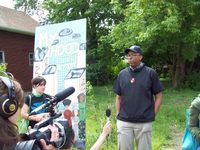 It was partly the tour that inspired three of us, Mike, Sarah, and myself, to ditch the afternoon sessions and do some wandering on foot. We started out by Wayne State University and ended up near the GM Poletown plant before turning around. Along the way we saw some excellent graffiti. Not super elaborate or overly stylized, but thoughtful and entertaining. 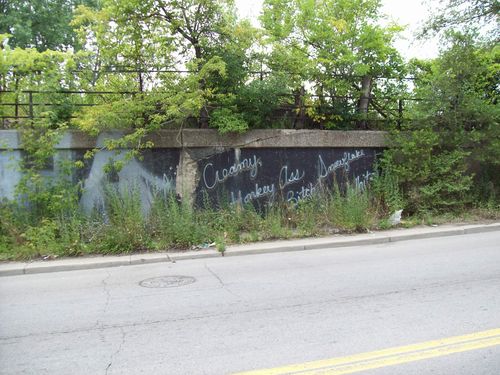 such a lovely thought

Later in the evening of the same day a few of us drove out to another part of the city, a quiet residential neighborhood of small single-family homes, kind of like the bungalows of Chicago. There we saw the house purchased very, very cheaply by the artists Sarah Wagner and Jon Brumit. It is a super-duper fixer-upper fixer-upper. That’s right, at least two ‘fixer-uppers.’ Even though it was occupied by a family as recently as three years ago, Jon went ahead and ripped out most everything. I anxious to see how they proceed. 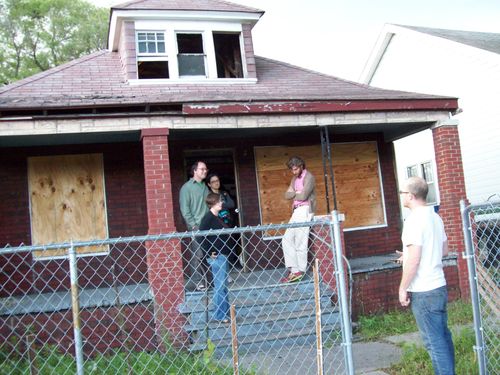 During and after the June 2008 Drift talk of Detroit came up with some regularity. It was only natural. After exploring the rural and small city radical threads in downstate and outstate Illinois and Wisconsin, curiosity about the post-industrial land- and social-scape of Detroit made it a reasonable next place to investigate. This summer a few of us aligned our schedules around the Allied Media Conference. That was the excuse. The reason, Detroit itself.

But for the first conference day I managed to skip out and spend a little family time with my aunt and uncle in Ann Arbor, and, not least, to visit the Labadie Collection. I had something to see: Open Road, the radical paper out of Vancouver published from 1976 to 1990. 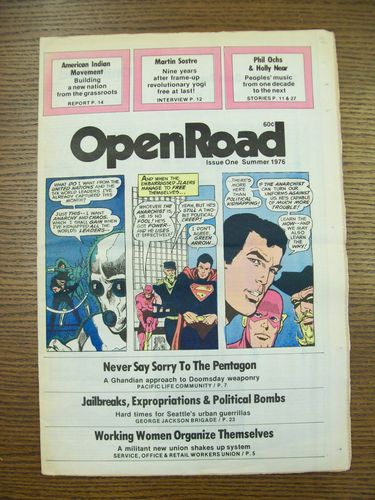 100_0610
Just as I had hoped and expected, the Labadie had a full run. I spent a good hour browsing, reading, and appreciating. I especially liked reading about the events and developments I'd heard about or read about it, but only as accounts much later after the fact. For example, the late stages of the Weather Underground. Or the solidarity and support efforts for radicals imprisoned for their radical activity in the first months and years of their incarceration, rather than in the 80s and 90s. Or, as in the case of Leonard Peltier, reading about the ongoing trials. 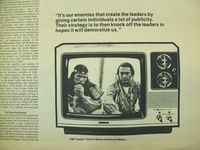 100_0616
There were good articles (and great graphics) about radicals on the run, like Dennis Banks and Russell Means...

and the Weather Underground splits. 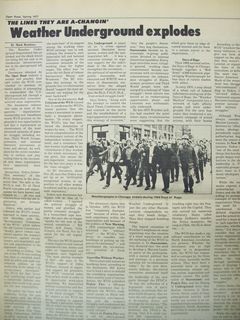 Until Open Road went to a smaller format in the mid-80s, every issue included a centerfold poster. 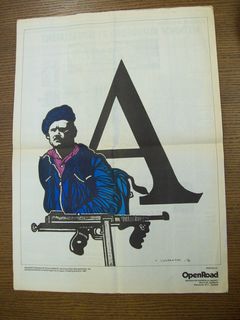 What I took from my quick study was that the late 70s was indeed a time of repression and fracture for the radical movements and groups that emerged in the late 60s and early 70s. Starting a radical publishing project under such movement conditions inspires even today. Initiating such projects when it is hard, when radical winds shift and wane, is sometimes when it matters most.

But the sparkling network well in place by the mid and late 70s is still in evidence, most clearly in the fact that the issue number Two did not come out until a year or so after issue number One. In an explanatory editorial in issue number Two they write that the delay was a result of having received more than 1200 (!) letters of correspondence, offering encouragement, criticism, and thanks. They say that it took a lot of the editorial collective's time and energy responding to them. That blows me away; 1200 letters, from all over the world, and they wrote them back! By comparison, communication is indeed much broader now, but also far thinner.

By the mid and later 80s the project seems to have lost energy and suffered dwindling resources of labor and funds. Here is the farewell graphic from the last issue published, in 1990. 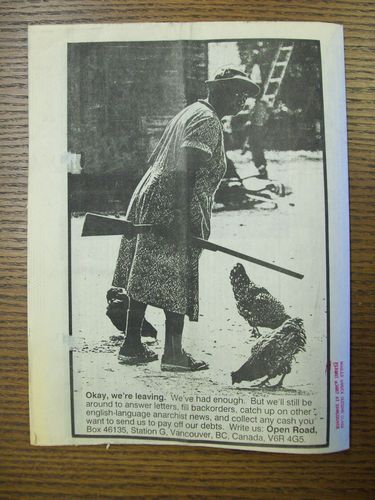 Nice to see some real leadership out of Congress every once in a while. It is especially gratifying when it's your representative. In this case, Madison's Honorable Tammy Baldwin.

What is sad is that there are no co-sponsors. Perhaps you could ask your rep to consider it?

circus spectacle, now and then

On Sunday we went to Milwaukee to see The Great Circus Parade for the second time. The first time was more than a decade ago, and the parade hasn't taken place since something like 2003. The parade is a Milwaukee specialty; the resurrection of old-tyme spectacle for the pleasure of a web-wowed, Guitar Hero-playing middle American audience is somehow heartwarming. And there just really isn't any screen-based equivalent to the tension one feels in the presence of a full ten-horse team pulling a massive bandwagon over hard pavement. But that only comes after the old cars and bicycles.

There are the usual politicians and high school marching bands. Stiltwalkers and clowns. And then the wagons, carriages, and riders in formations. Some of the most memorable were put to original use, carrying 'exotic' animals.

But the best (or worst) had to be the creepy but still fun old-skool 'International' section. Yes, that would be the wagons displaying the 'exotic' peoples. Disturbing and ridiculous. Offensive but strangely charming. Let me be the first to say:  I really hope political-correctness never erases this part. 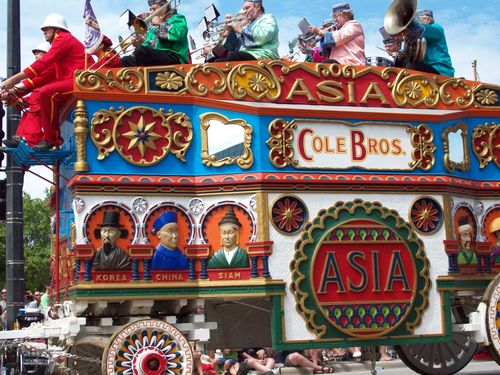 from the parade's 'international' section
The biggest disappointment of the day? No forty-horse team.

This man, Robert Foor, was originally incarcerated for a residential burglary conviction...and ended up in Tamms? For ten years? What would it have cost to have him treated for his illness? According to this article, his mental illness was not even all that severe. You have to wonder, maybe a combination of therapy and medication would have helped. Not even knowing the details, or having any expertise in the subject, one must assume that anything would have been more constructive than ten years in a lock-down isolation unit.

Given the inhumanity, the pure waste of life and public money, and the clear moral dead-end that is Tamms, who are the politicians who keep funding this sham? Who, really, are the insane?

Shut down Tamms. Help Tamms Year Ten do it.

Last Sunday, June 28, 2009, a general gathering of Mess Hall keyholders happened, for brunch, naturally. The 'keyholders' are simply that. People who have a key to the storefront space we call Mess Hall. Beyond the literal, the keyholders are the people who manage and, with the help of the endless numbers of participant friends, activate the space. We make distinctions between ourselves as to who is active and who is not. Some of the keyholders are truly emeritus, at least in the sense of no longer carrying a key. At least one is actively involved but lives in a different state. Many of the keyholders are collaborators in other combinations outside of Mess Hall. But as well, at this point, with at least twenty-two keyholders in the present and past, quite a few of the keyholders do not know each other.

There were sixteen who made the meeting. Early history was shared by those of the original cohort. Current thoughts about recent episodes of keyholder discussions were related by the currently active. In response to the ongoing and central question of economy and the role of money, every single person had a mind to speak. Exchanging views and experiences with keyholders from other periods was a great way for me to review what I think Mess Hall can be. Of course, simply getting acquainted with other keyholders was awfully nice. As an exercise in creating a culture of Mess Hall, the event was totally worth it.

There was some off-hand mention of having a gathering like this more frequently than once in five years. That would be nice, but, then again, I'm not really sure there is any practicality to meeting up any more frequently than three years. It takes time for there to be a whole lot of new Mess Hall experiences to talk about.

The discussions could have gone on but we had to scoot; another group had use of the space at 4 pm. That was a good Mess Hall problem to have–keyholders having to make way for the place to be used. Too many darkened windows in the past. The current frequency of usage is impressive and inspiring.

While straightening up the space I grabbed Marc Fischer for a quick video interview about the Temporary Services venture Half Letter Press. Watch it here.

Marc Fischer on the Half Letter Press from Dan S Wang on Vimeo.