I love the novel V. I really should reread it since it has been a million years. But part of the opening I remember pretty clearly. Benny Profane, 'a schlemiehl and human yo-yo,' moves up and down Manhattan by subway. Well, I'm with Benny. The last few days I've moved between my poles of Madison and Chicago so frequently, the yo-yo effect is being felt.

Notes and questions that have arisen as a result of this spike in drive time, having to do with the drive itself, which is, on my normal one round trip a week schedule, usually a two and a half hour experience I'm trying to escape:

1) For most relaxing driving, leave either end at around 10:30 at night. It seems the freeways and tollways are usually wide open then, but the overnight construction hasn't gotten rolling fully yet.
2) Driving into Chicago on Sunday at midnight gives you a taste of the quiet, lonely highways of years past. You still almost always see headlights on the interstate, but the cars are very widely spaced. Everybody's got their own section of road.
3) I wonder what the story is with that powerline that's going up right now, running along the southern easement of the I-90 tollway from about, I think, Schaumburg to out past Hoffman Estates. Anybody know what I'm talking about?
4) People have not been speeding, not like in years past. I wonder if the recession has something to do with the seemingly fewer speed limit scofflaws on the roads.
5) It's hard to beat a really good radio show. But still, why do people listen to Bill Cunningham?
6) Chrysler's Belvidere Assembly plant has been idle for weeks now. Driving by, one cannot help wonder if it will ever return to activity, or if we've just witnessed the end. Or rather, the beginning of another mouldering, disused midwestern factory.
7) Mike Wolf sent me a scan of a drawing he did recently. Now I'm imagining this satellite covering the midwest, making visible and maybe keeping track of all the ant-like movements of us humans on the ground. So I would be that one ant you sometimes notice that for no apparent reason to us seems to move between two places, back and forth. Yeah, that's me, and Mike's Satellite of Love floats above. 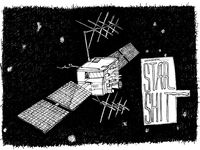 I'm just finishing a text in which I make reference to the murder of Vincent Chin. Having grown up then and there as an Asian American person, what I can say is that the anti-Japanese sentiment running through industrial Michigan in the early 1980s was really quite awful. The rising might of Japan's auto industry, and all their faceless, tireless, inscrutable Japanese workers, were implicitly and explicity blamed for car company and autoworker troubles. And it was only the newest iteration of an anti-Japanese racism that apparently had been in place since WWII. I say that because there were more than a few times in grade school that some white kid would taunt me with 'we bombed you!!' - remarks meant to hurt, apparently. The kids who knew something about ethnic relations would say 'hey, don't you guys [meaning the Chinese] HATE the Japanese?' - as if that was the really cool thing about being Chinese. Pretty negative, if not quite hateful in itself!

Anyway, the story linked to above gives no indication of any such xenophobia regarding the Indian workers and people. Instead, it's the American planners, contractors, and legislators, on the one hand, and the cheating foreign export governments, on the other, who are blamed. We've made progress, if only because Americans have now grown accustomed to the fact that we are, in essence, a multiethnic, multiracial society. That, and there's no use in getting down on Indian steel workers when your small town wouldn't have any health providers were it not for the Indian doctors who came to work there.

But there is no indication of concern or curiosity, either. A good next step might be, when making a similar discovery of imported product that could have been made right here, to think first of the Indian workers, and what their situation is. What are their grievances? They must have some, right? American workers might do better if there were some better understanding of their counterparts who are working for the companies and countries that are undercutting American industry. At least then there might present some opportunity to push for changes on those issues that hurt both, in some coordinated fashion.

Please join me next Thursday at Columbia College for this event I helped to organize. I've been interested in Karen's work for a long time. Indigo is an old friend and comrade. 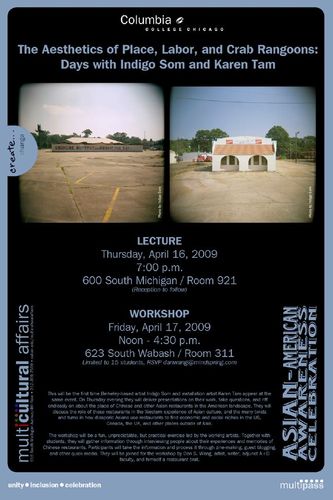 Here's the text from the poster, more or less:

Indigo Som is a Berkeley-based artist who has explored the far reaches of the Chinese restaurant phenomenon in a number of projects.  In one ongoing series of investigations, she visits local establishments in those parts of the US otherwise nearly devoid of Asian American population.  With camera and blog, she has toured the mountain West, the rural upper Midwest, and a belt of small towns across the deep South.  Her work has been exhibited in shows at the Mills College Art Museum in Oakland, the Headlands Center for the Arts in Sausalito, and the Asia Society in New York.

Karen Tam is an installation artist who has explored the aesthetics of Chinese restaurants in her ongoing Gold Mountain Restaurants work.  Often drawing on the memories and experiences of the older generation of restaurant owners and employees, she recreates the classic interiors we have come to associate with potstickers and mooshu.  Her work has been shown at Collyer Bristow Gallery in London, YYZ Artists’ Outlet in Toronto, and Centre A in Vancouver.  She is currently a Ph.D candidate in cultural studies at Goldsmiths College in London.

This will be the first time Indigo Som and Karen Tam appear at the same event.  On Thursday evening they will deliver presentations on their work, take questions, and riff endlessly on the place of Chinese and other Asian restaurants in the American landscape, their role in the Western experience of Asian culture, and the many twists and turns in how diasporic Asians use restaurants to find economic and social niches in the US, Canada, the UK, and other places outside of Asia.

There was big crowd on hand for Noam Chomsky. Not surprising considering this is Madison, after all. There were probably two thousand people or more. 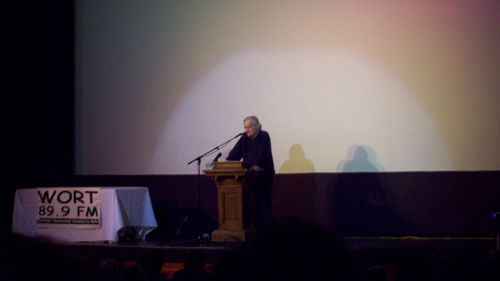 chomsky @ orpheum, madison
He performed as expected, but with the routinization of one who has been hammering away at American hypocrisy in foreign policy for decades. He is slower than in his prime, but for a man in his eighties, he is pretty remarkable. We should all be so active into our twilight years.

I had my usual Chomsky gripes, though. To sum it all up, it goes like this:  AND???

As in, okay, American hypocrisy is a fact...AND?

Okay, our elected leaders and ruling elites are morally bankrupt...AND?

Okay, some of them are honest and/or brazen enough to not even lie about it, thereby skirting the hypocrisy charge...AND?

Chomsky is uncompromisingly negative, frames foreign policy tightly around admirably simple moral codes (um, 'though shalt not kill' comes to mind), and exposes the brutality of projected American force for what it is.

But we already knew all that. Going to see Chomsky is like the inverse of going to see Neil Young. We don't want the nuggets, the sing-alongs, the greatest hits...we're buying tickets to see him take some risks, say something experiemental. And he never does.

And one other gripe: in the introduction Scottish physician-activist Dr. Graham Watt made a joke about how when he told a Canadian colleague that he was headed to America, to Madison, for a symposium, the colleague then said, 'Madison? That's not America!' The assembled throng let out a collective chuckle, unmistakably self-satisfied in tone. It irked me. I am as happy to be living in a non-conforming city like Madison as anybody, but a rolling of the eyes would have been a more appropriate response. Let's us never forget, yes, Madison is the enlightened city, in many respects more European in feel and governance. But like small, homogenous, wealthy European countries, Madison's progressivism is built on a kind of affluence that is not to be shared, an affluence that allows for a measure of denial.

More promising was an event two nights later. This was a screening of Democracy's Ghosts, an excellent documentary about the disenfranchisement of those with felony convictions. The event was part of an ongoing monthly screening series about prison-related issues at Rainbow Bookstore. The small room was maxed out at about twenty-five people,  and the ACLU reps on hand did a good job breaking down the situation here in Wisconsin.

On Monday I will host my final Talking Point event. It has been for eighteen consecutive months that I've convinced a presenter that a hit-or-miss Monday night audience at the Hyde Park Art Center would be worth their time, would be appreciative of their shared experience and information, and would look forward to engaging in a discussion for an evening. And that they would get something out of the opportunity besides the measly honorarium. In the process, I've learned something about curating. What, you say? Come to Monday's event and I'll tell you.

My collaborators from Mess Hall's early years Jane Palmer and Marianne Fairbanks will be the featured visitors for this last go 'round. A perfect way to bring it full circle.

Here is the full roster of featured visitors from my tenure as the series curator. Yes, they are ALL women!

Looking forward to hearing Noam Chomsky's latest thoughts on the Middle East. He's coming to Madison for this three-day affair, co-sponsored by many Madison organizations. As of yesterday, there were tickets still available at Rainbow Books. $10 a piece, well worth it, considering it is events like these that keep the Madison activist scene vital, visible, and moving forward.

I've heard Noam Chomsky speak in person once before. That was in college, probably twenty years ago. He held a small group discussion afterwards. Well, it was small (40? 50?) in comparison to the full chapel audience for the main lecture, anyway. He was terrific, astounding as always in his straightforward, practically emotion-free delivery while relating searing analyses of US involvement in atrocities in country after country. I asked him a question about censorship and marginalization regarding his own work. This was at a time when he'd been addressing in his book just out, Manufacturing Consent, the general problem of media self-censorship and bogus neutrality. I remember him saying, as part of his answer, that if he were black and not a famous scholar, he'd have been not simply marginalized but silenced, and if not killed, then certainly threatened, as many of the black militants of the Sixties had been. I was like, hm...well, that's a pretty good answer.

Anyways, the man is still doing it, telling it like it is, carrying the standard for a kind of informed activism - and activism of information - I sometimes take for granted. And he's old enough to say, we've got a global treasure here, let's appreciate and engage with him while we can.