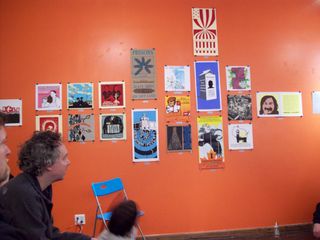 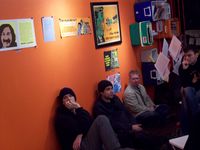 Tamms Year Ten activity continues, and will until that place is shut down. Here is their news update, reposted. I'm helping with an event at Mess Hall this Saturday. See #5 below!

In the age of global warming the Australian Open is emerging as possibly the world's most grueling athletic elimination tournament. Not only do the finalists have to play seven rounds in all, but the temperatures are ungodly. This year, on-court temps reached upwards of 130 F. Factor in the jet lag on top of the wacky scheduling, and we're talking about a two-week long endurance contest. No wonder many of the top players arrive up to four and five weeks before the tournament, and before then train in hot weather places. The conditions make the mental part of the game that much more important, and revealing.

I watched Serena Williams play Svetlana Kuznetsova in a quarterfinal. Kuznetsova had Serena, but choked. She was within three points of the match when Serena came back to take the second set and then the third. Kuznetsova went soft, moderating both pace and angle on her shots. Serena sensed the crack and wrenched it open. The ESPN commentators made much of Kuznetsova's mental weakness. Bud Collins went as far as saying that Kuznetsova felt the pressure around her neck. By contrast, the commentators also made much of Serena's mastery of her nerves, and her renowned ability to step up her game exactly when the pressure increases. At one point one of the commentators described how Serena sometimes focuses her mind before play by closing her eyes and slowly pacing the backcourt, blindly, for up to a minute.

Those comments made me wonder, is the war of nerves partly why tennis and golf are the traditional sports of the wealthy white elite? That the two popular sports (as opposed to obscure, ie polo, etc) most associated with nerves also happen to be the two that white people have traditionally dominated? It makes sense if you consider that the strength of nerves is a highly valued, highly rewarded characteristic in the world of the power elite, and that the power elite is (or was) basically white in make-up (think Carnegie and Frick).

So, to see a Tiger Woods absolutely dominate a field of 95% white competitors in a sport/game that rewards ultra-high pressure performance--and for him to do it with those break-left/break-right/break-left putts on crucial holes--um, is it a stretch to say that he helped prepare American people for a pressure-loving Obama? I mean, did those amazing performances--which, incredibly, at some point a few years ago began to feel almost routine--to actually have enough confidence in a black politician to vote him into the land's highest office?