A few weeks ago my friend Kay, who moved to Montreal not long ago, came back to Chicago for a short visit. We managed to meet up for an evening. She brought for me an exhibition catalogue for a show in the McGill library called 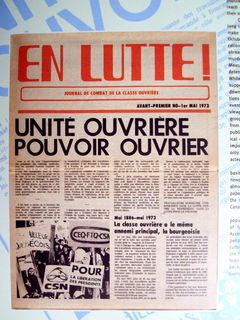 En Lutte!, no. 1 mai 1979
Quebec Alternative: Periodiques radicaux des annees 70 au Quebec/Radical Publications of 1970s Quebec. I just got around to giving it a good read-through a few days ago.
The show consisted of works selected out of the collection of Marc Raboy, a professor at McGill, and which he donated to their library. The catalog is bilingual, of course, and laid out in an upside-down mirror image design. It is too bad that all the images are presented twice. There could have been twelve different reproductions instead of just six, twice. Still, all are images of publications I had never heard of.

The catalogue text makes mention of both the still-operational Black Rose Books and the American magazine, Scanlan's Monthly. Neither had I ever heard the story of how editor Warren Hinkle couldn't get an American company to print Scanlan's in 1970 for reasons of both political content (too radical!) and offending the unions (which dominated the printing trade then). He finally found a willing shop in St. Jean, Quebec.