the best part of the nyc trip...

dara, daniel, emily
It was inspiring to see my friend Libya doing her theater work in NYC, and to compare notes about politics and everything after not having seen each other for several years, but even that is not what I'm remembering as the high point. 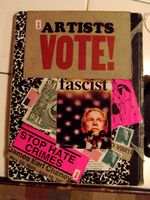 libya's sketchbook
No, the triumph of this trip was the excursion with Red76 to Flushing, and more to the point, the discovery of some amazing Chinese food. Much better than what's available in Manhattan's Chinatown. We're talking hand-pulled noodles and northern style jiaozi. Yum!

And you know you're in a marketplace of Chinese consumers when you come across these displays of high-tech toilets! 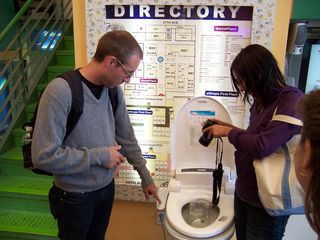 zefrey and susannah are fascinated

Yes, of course. There are millions here. There are people I know. Including many from Chicago, and many who did their time in Chicago. They are in town for the openings of the Signs of Change show at Exit Art and the Democracy in America 'convergence' at the Park Avenue Armory. Those events are why I'm here, too!

I'll be saying something about the MRCC on Monday, Sept 22 at the Armory at 7 PM, as part of Red76's Battery Republic project. I won't have images–just talk. But I will have A Call to Farms books for (very reasonable!) purchase. See the full Battery Republic schedule here. Unfortunately for me, Trevor Paglen will be presenting at the same time, and his presentations are always great. Don't miss it if you haven't seen him speak. You'll never think of shadow players in the same way.

And then Red76 will be eating our way through Flushing on Tuesday, Sept 23:

We are going lunch-hopping in Flushing. We will try new Chinese dishes, maybe some Korean bbq, probably some South Asian, too. While eating, we'll think and talk about, and absorb, the aesthetics and political questions presented by migration. I will have stamped postcards on hand so we can record our thoughts, drop them in mailboxes, and have them be a part of a steadily growing postcard project now on display at the Hyde Park Art Center in Chicago, and also collected online.

Meet at the Information Booth Clock in the main hall of Grand Central Terminal at 11.45am

now available: a call to farms

Yes, the MRCC/Drift book is finished. Except now I think it should have been titled a A Call To [F]Arms, considering the rad elements of Sam Greenlee and Gerald Raunig. Yes, food and revolution. But whatever. That is not the only criticism I have of the book, of course. On the design tip, Mike Koppa emailed me comments before I saw the thing, noting that the gutter is too tight. Absolutely, I agree with that. The margins could be chopped by a quarter inch, at least. 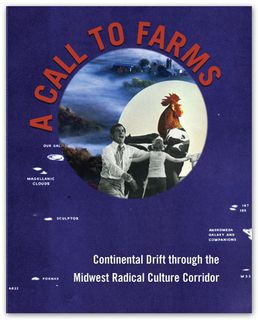 mrcc book
You can buy it from me for, oh, ten bucks or so, or order it from Mike, or download the pdf for free.

Then there is the writing. Mine is not first rate, that's for sure. The C/CURE item is way too short, and captures nothing of how amazing our afternoon spent on the far, far south side of Chicago was. And then there are the omissions: no mentions at all of Gerald Raunig, InCUBATE, the AREA release event, not much on Mess Hall, nothing on Kevin Hamilton, Brett and Bonnie's Garage & Garden space, and probably other things I'm forgetting.

But who cares. It's still great–even more so when you consider it went from an idea in conversation to a real object in less than three months as a side project! (Recall that Downtime at the Experimental Station took about two years to reach fruition.) Compared with most of the quick-and-dirty publications that come out of the critical/social art scene, this one is anything but cheap looking. And some of the texts are fabulous. Sarah Kanouse's introduction is beautiful. Claire Pentecost's reflections are (as usual) insightful, self-critical, and expansive. Sarah Holm's devout and grace-filled dairy-chore narrative may be the single least expected text I've ever encountered in a publication coming out of a critical art effort. Finally, mIEKAL aND's avant-theory maps the outer limits of intellectual analysis, and proves that the work of poets is absolutely and vitally necessary if we are ever to crack the logocentrism of our linguistic prisons. And oh my god is his text fun to read.

So the general election is upon us. Less than two months left, and the game has been changed by the addition of Sarah Palin to the Republican ticket. The selection of Palin has really energized the base...the left wing base, that is! When McCain took Palin, he played an all-in strategic gamble:  he's betting that the right wing base will turn out in greater numbers than the left wing base. So it's up to us to motivate, especially by reminding our people that this election is not even about Obama. It is about repudiating the right wing!

And as artists we all have our part to do. Here's a pic of posters I just printed up over the last two days. No red and white and blue bullshit patriotic colors, only the universal colors of change: RED & BLACK! 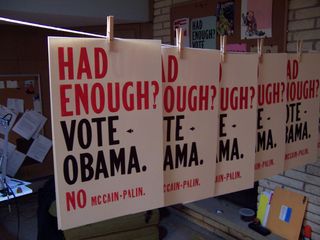 new posters for the big 'O'

ah, finally, a little msm attention, and i do mean little

And check out this bit, passed along from Mike Wolf. It's a Sun-Times blog post about the Red76 Revolutionary Table event that took place in Peavey Plaza last Tuesday at noon.

There is certainly a place for big demonstrations. We need them. But we have to understand that the big protest march is only one very specific tactic, and will be useful only toward certain ends. Getting news coverage–any news coverage, much less favorable coverage–is not one of those ends. Which is why I am always puzzled by activists who judge the success of a march (even partially) on whether and how it is covered in the news afterward.

and, one more rnc report

Another short report for everyone.

But for people wondering about the scene there over the RNC days, you should know that there was as well a lot of unwelcome apart from the narrowly-defined protests. There were quiet events and super-local expressions of unwelcome all over. One of the bigger non-street-protest events was a very positive feeling ten-dollar Labor Day concert put on by the SEIU with a great roster of political acts (Billy Bragg, Tom Morello, Mos Def), and it was held at the same time as the week's largest organized antiwar march (which I think is the demo at which Amy Goodman was wrongfully arrested). I appreciated the fact that those of us in town for those days had choices. I opted for the concert, and it was really terrific being with a huge gathering of like-minded people at a worker-oriented event with NO police.

The concert was held on Harriet Island, across a river from the RNC site. Given the extreme crowd control on the downtown streets, having the artists lead crowd yells addressed to the Excel Center a half mile away was probably just as effective as the protests right outside. It terms of making a constituency visible to itself, which is almost the only thing that can be positively accomplished in big street demonstrations these days, the concert was a success. Billy Bragg told a great story about going to a big open air concert as a young guy and seeing the Clash, finally understanding–seeing the proof, if you will–that he wasn't alone, and instantly deciding that singing for the fighting people was what he wanted to do. Having the hip hop fans and rock hipsters mixed in a crowd of SEIU members and families was also good to see.

And with Palin-panic setting in, I did appreciate seeing quite a few young people at the concert sporting ripped Obama gear. 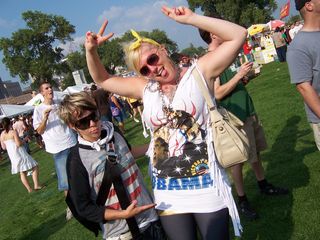 Mike Wolf's Song of Returning show was another 'alternative to the alternative,' a quiet space in the other city (Mpls) which brought another dimension to the politics surrounding the manufactured urgency of the RNC. Paul Durand's beautiful map of native places was there, militant outsider artist Andrew Moore contributed a couple of wild collages, Chris Hammes showed a photo doc image of sweet guerilla art agitation in a factory-farm. Aaron Hughes, who in body was all over the week's protest itinerary, contributed a haunting display of drawings and Iraq-tour memory material.

Mike Wolf, Courtney Moran, and I did go to one, well, what would you call it? Open street theater? Play protest? Satirical celebration? The event was billed as 'Celebrate Big Oil,' and the occasion was a posh Tuesday evening reception for Republicans being thrown by the American Petroleum Institute. In a group of about thirty, we tossed play money, chanted funny chants, and toasted the success and long life of the Big Oil fat cats as they walked the gauntlet: due to road construction and closed sidewalks, they could only get to the reception entrance by walking through the cheering throng of their 'fans.' The Repubs seemed baffled, but a few played along, which had us cheering even harder. There were a few cops, but they were entertained into non-aggression, and advised us to make sure all the play money was picked up in the end. Which it was.

MY first trip to Minneapolis was a re-introduction, after having lived their long ago and not visited in about four years; visiting again one week later and over the RNC opening was a different experience, more about witnessing in a place that very quickly, because of the earlier visit, had once again felt like home. I didn't have anything to do with the RNC Welcoming Committee, but definitely felt like I belonged to the general tide of Twin Cities unwelcome.

Maybe it was a little different in the suburbs, but in the two big cities the unwelcome was apparent just about everywhere you went. Billboards and graffiti, art projects, and lots of decentralized actions. Basically, something for everyone. Very different than the single huge protest march at the RNC four years ago in NYC.

On the art front, the big political project cluster was organized under the rubric The Unconvention. This was an art fest sponsored by a collection of Minnesota's most prestigious institutions, including the Walker, Intermedia Arts, and Carleton College. There was some decent stuff at Peavey Plaza, the Unconvention's outdoor base (their other bases being indoors and/or scattered). It was good to see some creative use of media around town, and the Unconvention sponsored a lot of it.

My problem with the Unconvention was that it is a self-declared 'non-partisan' initiative. Many of the projects that I encountered were only non-partisan in the most literal sense, meaning they were about issues and political concerns, revealed a progressive politics, but did not address either party. They were topical, but could not address candidates, or take positions on the parties directly. That is the price of prestigious non-profit cultural institution support.

Song of Returning at Art of This was not part of the Unconvention. Neither was the work of the full-force CAFF (Cheap Art For Freedom) collective (whom I'd never seen assembled in whole membership before), who were about town putting out their rad homespun agit-art. CAFF and the Song of Returning artists could attack if we wanted, with no restrictions, and/or address a politics of wider concern than just this election season. Less prestigious, smaller audience, and self-funded, but demonstrating greater freedoms. That it is why I believe it was important to have the political art over RNC time not be limited to that supported by the Unconvention.

Here is a detail of the amazing map by Paul Durand on display in Song of Returning. 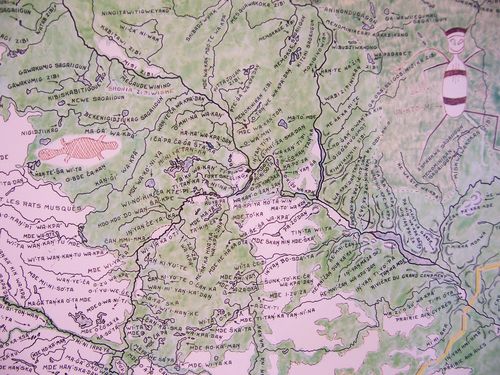