and ya know what I hate?

When idiotic record store people slap an adhesive label right on the record, blocking the hole! 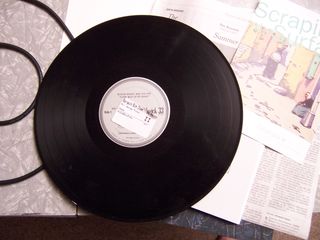 gladys knight / label
If you want to play the record, ya gotta take the label off, which is hard to do with defacing the song titles and other essential info, like so: 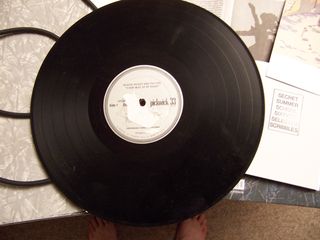 gladys knight / bargain bin
I mean, I realize this came out of the bargain bin, but jeez, even for $0.99 you'd expect a little more care. The culprits in this case are the folks at Dusty Groove, and they should definitely know better!

Spending a few days in Minneapolis for the first time in probably four years was terrific, and this was the first time in many more years than that during which I actually had time to soak in the city. Impressions: the south Minneapolis core neighborhoods are certainly less white than they were when I lived there. Somali, Mexican, and African-American peoples have moved in. I saw a sign for stepper's lessons, which for me confirms the theory that the blacks are largely from Chicago. We enjoyed very good tacos and gorditas from the Lake Street corridor, which fifteen years ago just weren't available in the Cities. All in all, it felt very comfortable, quite unlike the weirdly homogeneous urban center I remember from the late Eighties. I wonder though, is white Minnesotan reaction (quiet, coded, and/or unspoken, of course, as is the Minnesota way) against the influx of migrants, esp the people of color, partly to account for why some knob like Tim Pawlenty can get elected in what used to be the bluest of blue states? It's just a question.

I managed to take a morning walk from the apartment I was staying in down to the river. In glorious sunshine I got an upclose view of the stone arch bridge and mill ruins, and for a moment had the funny feeling that I was in a European city. On the return trip I stopped into the Open Book building for a juice and unexpectedly ran into a lobby exhibit of Romano Hänni's intense virtuoso letterpress work. Beautiful, inspiring, well in the vein of my obsessions, and good to see that somebody is carrying the Swiss tradition forward. Check out some of his work here.

I'll be back in the Cities this weekend coming up, to finish out the short installation run at Art of This, and to take part in the city-wide celebration of the (hoped-for) demise of the GOP.

in minneapolis, events at art of this

And now, to Minneapolis! For Mike Wolf's Song of Returning. Details below.

Hope to see you there. Opening on Saturday.

Art of This, The Network of Cumulative Art, and The Midwest Radical
Culture Corridor present:
Song of Returning, Both Silent and Aloud
(Domestic Struggle Part Threee)
August 23 thru September 7, 2008
Art of This
3506 Nicollet Avenue, Minneapolis

How do we touch the land and how does it touch us?  There is a long,
vibrant history of so-called "back to the land movements."  But in
fact we have never left the land.  We have always been dependent on
the land--and the people who work closely with it--for our survival.
When we fill the tank, flip a switch, open a bag of chips, sit quietly
in a comfy chair, or get on-line--even though we are largely
unconscious of it--we are in relationship to the land.  We are
constantly touching the land and it is constantly touching us back.

'Songs of Returning' is an occasion to appraise different
relationships to the land.  It is an opportunity to imagine how stolen
land can be given back,  how people are coerced with physical and
economic violence to relate to the land in ways they would not choose
for themselves.  And it is an effort to make a home, nurturing,
imaginative places for speech and acts that begin to erode the
colonial pathologies that pervade in our culture--our relationships to
the land.

----Artist Projects----
Dan S. Wang
(prop-press.vox.com)
"Old Words in Present Form: An Installation Exercise in Political Speech"
We'll gather and set-up the materials (speeches and a/v gear), use it
to process the words of movement figures from years gone by, and see
how it looks and sounds in updated form.

Jacob C. Hammes
Hammes gives us a glimpse into an ongoing project in response to the
industrial feedlot recently built adjacent to where he grew up in
Iowa. These largely automated operations suck up water, pollute land,
endanger the health of
neighboring humans and wildlife and provide nothing for the community
except lakes of shit.

Paul Durand
"Where the Waters Gather and the Rivers Meet"
We are privileged to have Durand's hand drawn map of Mi-Ni So-Ta.  The
product of over four decades of research and travel around the region
this map gives a shattering glimpse into the vibrant pre-colonial past
of this place we live.

Aaron Hughes
(aarhughes.org)
"25 Days to Chicago"
Hughes, who was twice deployed in Iraq,  shares a series of drawings
and an audio piece that fill some of the holes left by the media in
covering Operation Iraqi Freedom (The title refers to a Time Magazine
campaign, after Bush declared an end to major combat, "21 Days to
Baghdad"), and reflects on his experience of the ways that trauma
conflates time and place.

Let's Remake
(Bonnie Fortune and Brett Bloom - letsremake.org)
Let's Remake brings us a corn field installation, monoculture in
effigy.  Upon the closing of the exhibition we will have bonfire
(location TBA) to burn monoculture!

--------Event Calendar-------
All these events are at Art of This, 3506 Nicollet Avenue in Minneapolis
Other events will occur, keep your eyes and ears peeled.

August 26
3pm to 8pm Open hours
8pm Free Video Screening
"The World According to Monsanto"
DVD, 90 minutes
A documentary by French writer, film maker Marie-Monique Robin that
"pieces together the story of Monsanto, focusing on a look at its
domination in the field of agricultural products."
Snacks! (bring drinks to share)

September 4, 8pm
Free Video Screening
Threee Landscape Videos
Snacks! (bring drinks to share)
*Gone Tomorrow: The Hidden Life of Garbage
DVD, 19 minutes, Directed by Heather Rogers
A brief history of garbage and landfills in north America
*Manoomin: A Minnesota Way of Life
DVD, 22 minutes, Directed by Teresa Koneche
A short documentary on the effort to defend wild rice from patenting
and maintain the spritual and cultural sustenance it provides.
*The Land Connection
DVD, 11 Minutes
A documentary about the history of the rise of organic farming in part
of Central Illinois.

Two mini-vacations have thrown me off the blog path.

Two pics to show where we went, neither of which was terribly far. These weren't exactly 'staycations' but they weren't entirely new adventures, either. We spent a couple of days in the Sylvania Wilderness, which is something like a small patch of the Boundary Waters Canoe Area, and then a few more in the Porcupine Mountains Wilderness State Park. These were second visits to both.

First, from the Sylvania Wilderness of Michigan's U.P. 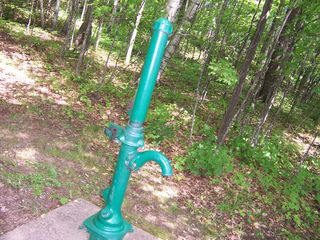 sylvania wilderness well
....'cause the vandals took the handle.


And then the next week we spent five days in Chicago (okay, almost a staycation), which brought me the kind of art I sooo miss in Madison.... 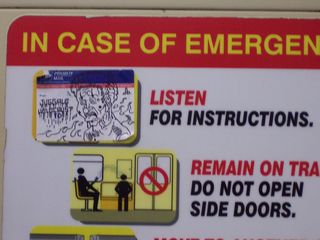 Like hundreds of millions of others, I did watch the opening ceremonies of the Beijing Olympics. And, like other people, in response to the Chinese government's massive marshalling of resources for its over the top display, I felt a mixture of awe and disgust. Leave it to Ai Weiwei, who helped to design the bird's nest stadium, to cut through it all, from the inside out.

From the LA Times:

Ai Weiwei, an avant-garde artist, said the ceremony focused primarily on giving "face" to the government.

"They tried so hard and wasted so much money," he said, adding that the oversized torch atop the Bird's Nest, which he helped design, resembled an ice cream cone.

"The ceremony was stupid, a real wasted opportunity," he said.

Enjoy this video of the man himself explaining the basics of the design, breaking down form and function.
Ai Weiwei: Olympic Bird's Nest & Beyond