Well, it took about eight months but I finally got around to scanning the photos of my appendix. Here it is, infected and looking nasty: 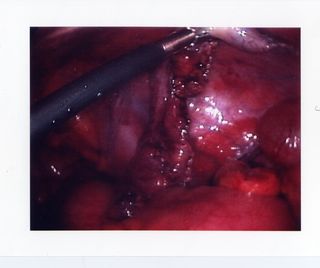 Appendix1010
And here is the same area, after they cut the piece out. 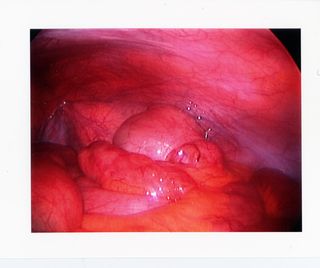 Appendix2011
Of course, as any good artist would, I asked that my appendix be saved, so, um, I could do something with it eventually. But just as I was going under, and being wheeled into the OR, the doc said, no, the tissue would go immediately to the path lab and be destroyed. The pics are all I have.
I was telling my uncle about having had this procedure and he told me about his appendectomy. He had it done while doing his medical residency in the seventies. He had to do his own blood work, and then he had the appendix removed under a local anaesthetic! And then, because it was a local, the hospital didn't give him any support–he had to walk out on his own!

That story says a lot about conventional medicine. No wonder people who can't deal with pain end up being critical of so-called allopathic medicine. Historically, it hasn't been for wimps.

dan, calling from a car on the kennedy....

One of my bad habits related to doing a once-weekly long commute by car is indulging in talk radio. As in, calling in and having my say. Or, at least, trying to have my say. Or, at least, trying to not sound like an idiot. The other day, for example, I called in twice. In the afternoon I called in to the inaugural broadcast of WBEZ's Right Now with Richard Steele. That show was about wrongful convictions (a real problem in Illinois, especially at the capital offense level!), and all related problems such as evidence tampering and untruthful testimony. As some people know, I happened to have been an eyewitness to a murder more than ten years ago, around the time I first moved to Chicago. So I called in to share my story.

My basic point was that even eyewitness testimony, the supposed gold standard of evidence, is not reliable. But the words that came out were not terribly coherent, to put it mildly! For one thing, the show was in its last minutes and I was rushing to get my words in. And then, I was mixing up the information. One the one hand I was telling the story of how I felt somewhat railroaded by the coaching of the state's attorney, and, on the other, I was emphasizing the fact that uninvolved witnesses to an act of violence are almost never, in that moment, paying attention to the kinds of details that prosecutors are looking for, and have to do quite a bit of memory reconstruction. It came out jumbled, so if the Richard Steele's inaugural show went a little lame at the end, I'll take the blame.

On the way home to Madison that evening in heavy traffic, I called up Bruce DuMont's Beyond the Beltway show, which was a special 'instant reactions' broadcast following the ABC Clinton/Obama debate. The topic at hand: the Rev Jeremiah Wright controversy. My point: the mass media's fixation on the Rev Wright video clips reveals some serious ignorance about black church life, and, further, proves that we still live in a segregated society in which black and white don't really know much about the details of each other's cultural and religious lives. This time it came out more coherently: "Anybody with any knowledge or experience with black church life would recognize the Rev Wright clips (even taken out of context!) as belonging to the black Christian prophetic tradition, which is in the mainstream of black church life!" Maybe I was too coherent–Bruce DuMont, who didn't seem to like the several consecutive calls defending Barack Obama's association with Trinity Church, went straight to a break, without comment.

lucy parsons in the inbox

My email inbox has been hovering at around 1500 for the past year, up from about a hundred the year before. At this rate, I may have to declare email bankruptcy in about another ten years. But in the meantime I still get some enjoyment out of going through the inbox and sorting through the old emails.

For example, it was fun to review an announcement for an email exhibition of old anarchist letterhead I received quite some time ago from Marc Fischer. It's one of those things...now I wonder, what was I so busy with that I didn't stop and take the time to absorb these wonderful examples of my favorite form of printed ephemera, letterhead?

The curator of this exhibition, Jesse Aaron Cohen, asked that people not reproduce images from the exhibition on their sites or blogs. I will respect that request, but you can see all the examples here. I love the Lucy Parsons letter.

Conklin House turns a corner in Madison
There is something funny about this story of the Conklin House being moved across the isthmus. The fact of college students gathering around a slow moving spectacle, delighting in spontaneously expressed wonder and curiosity, somehow warms the heart. Once you factor in the non-existent role of alcohol, this episode becomes downright charming. According to the article, in order to be moved the house was essentially sawed in half. The evidence of such wonder in apprehension is much quieter in the Gordon Matta-Clark show at the MCA, if it is there at all.

debord, still, here and there

After contributing to the Red76 VDC project in Columbus earlier this year I sent a few things to the curator Jim Voorhies–some pamphlets, some printed ephemera. And a few days ago he sent me a little package in return. In it were catalogues from recent Canzani Gallery exhibitions, all of which include texts by him. The only one I've had time to sink my teeth into is the one for the show Consumption Junction. Looks to me like it was not just another exhibition about green design or sustainability. One reason why is because Voorhies uses Guy Debord as his starting point. Debord's film Society of the Spectacle is included in the exhibition, but it is in the catalogue text where Voorhies makes it clear that Debord's ideas are relevant to contemporary environmental discourse precisely because they remain a critique, and and a very exacting one at that. The Fifth Estate has long engaged environmental thought from the critical urbanism starting point, ie Debord, Mumford, etc, but I haven't seen it so much in the art world, and never so directly as in this show.

Days after having read through that text, I made the trip out to the Gahlberg Gallery at the College of DuPage for the Work of Michael Piazza show, curated by Brian Dortmund, Jim Duignan and Bertha Husband. The late Michael Piazza was a key figure in the Chicago's radical and socially-engaged art circles for many years. For many of us who were a little younger than he, Michael was (and still is, really) a model. There's an informative review of the show right here.

For me, it was great to see Michael's studio creations, which I had never seen before outside of group shows, and the early ones of which I had never seen at all. Some of the sculptures are brilliant and wryly entertaining. There was also a kind of assemblage, in a suitcase, in which were gathered various printed works, pamphlets, ephemera from the archives, and a number of books, apparently important to Michael. Tucked in one of the suitcase pockets was a worn copy of the Black & Red edition of Debord's book The Society of the Spectacle, the version which heavily influenced the North American radical scene in the Seventies and Eighties. And which you can read here.

It is amazing to me how Society of the Spectacle continues to inform artists' explorations of a way out of this catastrophe we are facing. (Not a catastrophe, you say? Well, at the very least it is a gigantic mess, and if you live in Haiti or Somalia, catastrophe is probably still the better word.)The catalogue for the Gahlberg show, including an image of the suitcase on the front page, may be downloaded here.

What do the Doors, Judy Collins, Queen, and Josh White have in common? They all recorded for the Elektra label. So did Phil Ochs, Love, and Carly Simon. A few days ago I finished Jac Holzman's entertaining memoir Follow the Music, so now I know who to blame (for Bread). Here's a site with what is supposed to be the complete Elektra discography. Say what you will about the taste, the range is impressive, especially once you factor in the Nonesuch records.

It is a decent story, if you can stand the self-congratulations, especially for anybody interested in how the scene and the business went from small, New York folk-oriented releases to bi-coastal, big time rock and pop acts. Analog gear heads would appreciate Holzman's nerdy passion for great recordings. All Doors fanatics (like my old friend Balz) should definitely have a read, for the tales of Morrison told from the perspective of his label president and the engineers Bruce Botnick and Paul Rothchild. There is also an amusing story about how after Music from Big Pink came out everybody wanted to go record in a big country house, somewhere. Elektra was talked into renting an old inn for a group of musicians, among them a teenage Jackson Browne, to do their thing in a 'natural' setting. The musicians plus hippie chicks plus hangers-on ended up with no recordings to show for their retreat, but smoked a kilo and a half of dope per week on the label's dime. I suppose that qualifies as one way of stickin' it to the Man. The minor characters keep the narrative interesting:  Ahmet Ertegun, Cynthia Plastercaster, Dylan, etc. Delaney Bramlett comes off as a total jerk, but maybe he was just stickin' it to the Man (ie Jac), too.

The book is fluff, mainly a diversion, but it resonated for a moment more deeply when viewing Guy Ben-Ner's video Wild Boy at the Smart Museum. The piece is an adaptation of François Truffaut’s film L’enfant sauvage (The Wild Child) (1970), which itself is based on the true story of Victor, the famous feral child of Aveyron. The video is a domestication, literally--Ben-Ner remakes the story by casting his own kid in the part and shooting the whole thing in his small apartment kitchen and living area, in a toy land aesthetic. It is silent until the final minutes...and what should be the outro but a classic of that massified wildness so typical of Sixties pop culture: the Doors' Break on Through. Most true feral children don't live long lives. Neither do they who reject their civilized upbringing and go searching for the feral. Following Morrison's artistic arc once again in the book, I have to say, the song is the perfect choice.