Before hitting the road for Chicago Sunday evening I made it to the Oaxacan printmaking show at the Common Wealth Gallery in the Madison Enterprise Center. These were woodcuts and stencils from the Asemblea Artistas Revolucionarios de Oaxaca (or, ASARO). It was a decent show, and included some terrific stencil works. It is also very informative about the uprising there, about which I have not lately heard much. I couldn't stay to meet people or enjoy the entertainment, but I did ask a guy for a flyer by which to remember the show. He gave me one of their large ones, poster-sized. Here's a Just Seeds post with some more info on this show. 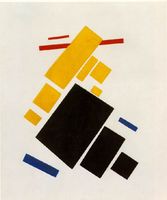 Malevich.aeroplane-flying
The other day I had about an hour to kill before a meeting. I tried to rush into the Art Institute to see the Edward Hopper show, but what was I thinking? The ticket line took about twenty minutes. By the time I approached the cashier I knew it was a lost cause. I aborted my position in line.

I had time enough only for a quick browse of the bookstore. And whatta find. I never knew there was a bargain table in the back room. There was a good deal of junk, but I did find two steals: the monographs Kazimir Malevich: Suprematism and Robert Smithson, published for the LAMoCA show from a couple years ago. The Smithson book I had already checked out twice from the Columbia College library, so that one was a no-brainer. I'll check into their bargain table periodically from now on.

The Malevich painting from 1915 represented on the right is reproduced in Suprematism, along with a lot of great drawings I'd never seen before. And to read about Malevich, what kinds of twists his career took–wow, another intense story of personal vision as a product of and grating against sociopolitical conditions. (I can't get too many of them!) There is a revealing 1927 review by Lunacharsky of his big Berlin show included in the Appendix.

I saw Chicago 10 today. The archival footage and, even better, the crowd sounds are totally worth experiencing on a big screen, with theater sound. But as a story, the film seemed incomplete to me. The background information feels rushed and superficial. I mean, who are these people? Tom Hayden and Bobby Seale, to single out just two of the ten, have pretty great stories and relationships to super-important parts of the Movement. I think the Black Panthers were mentioned exactly once, and with no accompanying image, and SDS, the group Tom Hayden helped to found, not at all.

When I first read about the Chicago Eight in Zaroulis and Sullivan's book Who Spoke Up?, the defendants caught my imagination, like they were some radical supergroup assembled, perversely, by the government. I couldn't get over the all-star make-up of the Eight, plus Kunstler and Weinglass, as filmmaker Brett Morgen rightly recognizes their key roles and personalities in resistance camp.

But you don't get a great sense for the spectrum of anti-war resistance represented by the Eight. The easiest excuse is one of time. There simply isn't time enough in a two-hour film to contextualize fully. But here I must object. The film does indeed put emphasis on Abbie Hoffman and makes his the dominant voice in the narrative. And, yeah, he is funny and all, and the treatment certainly humanizes him, but I personally would have liked to hear more about the trial from Dellinger, and maybe something about politics generally from Bobby Seale.

Bobby Seale's appearance is limited to his effort to defend himself in court, and the marshal's effort to shut him up by binding and gagging. It's a great, powerful, infuriating, and depressing scene, but maybe just a tiny bit more about who Bobby Seale is would have made it that much better for viewers who might know that much about him.

Of course, the film is great for getting lots of brief vintage images of Chicago. I love seeing the Chicago cityscape of the Sixties and early Seventies in movies.

report on my music consumption

One of the pleasures of living in Madison is being around a lot of different kinds of music, but not having to deal with the crowds and traffic of a much larger city. But it turns out I still don't have the time to take in all the shows that catch my attention. Last weekend I had a plan to see two shows. We had a foursome set for Steve Earle at the Barrymore, and then I intended to see M.O.T.O by myself afterward at the Crystal Corner, a place I still haven't been. But adventurous, full nights of shows are just so easily derailed these days. I think I came home and just went to work, on some grant proposal or drawing. Fortunately–and maybe this is part of the problem–the listening station at home is sounding better than ever, after having recently invested in new a Music Hall turntable. So much more signal comes through that sometimes it sounds like I got a whole new record collection. And to be fair to myself, Steve Earle played quite a long show.

Speaking of records, I believe I will be buying more LPs in Madison. Or else on travels, like how the recent trip to Columbus netted me a couple of Country Gentlemen records. (Not the classic line-up, but still, it's the Country Gentlemen!) What can I say? The new 10.25% sales tax in Chicago has created a newly price-sensitive consumer out of me.

And, finally, there is WORT, which, after ten months in this town, I have come to love. Especially the Leopard Print Lounge on Tuesday nights. Today on the Friday drive time show Blues Cruise–wait, I know what you are thinking: there are so many lame public and community radio blues shows. Yes, you are right.

STEVIE RAY & JIMMY VAUGHAN "PIPELINE" ON A DOUBLE NECK!
But this one is really pretty good, and heavy on the soul/funk side, and blues is really only a part what gets played. Anyway, today the host Dave Watts tipped me off to this video of Stevie Ray Vaughn and his brother playing a double necked guitar together. It brings back a faded memory of when I saw them do exactly this, as the last of three encores at a SRV & Double Trouble / Fabulous Thunderbirds show, at the Royal Oak Music Theatre. This must have been in '85 or '86, and if I remember right it was the first time Stevie Ray Vaughn played in the Detroit area.

PROCEED AND BE BOLD DOCUMENTARY TRAILER

I love watching video of letterpress, even the boring ones. But check out this fabulous trailer for the documentary about my favorite badass/smartass printer, Amos Paul Kennedy. I've known Amos for a while now, having met him first back in Milwaukee probably a decade ago. He brought his posters to Mess Hall for a weekend show back in 2004. That was great fun. I wonder when the full doc will be done.

clinton bounce back and gygax tribute

So with strong, if expected, results in the Ohio and Texas primaries, Clinton takes back the game on the same day Gary Gygax dies at his home in Lake Geneva. Being obsessed by the appearance of Clinton and Obama, I think it is notable that over the last week Clinton somehow found a way to increase her charisma to about 17, to use old-skool Advanced D&D numbers. And just over the last three days or so, Obama's was beaten down from his recent demigod-like score of 19 to the level of an exceptional mortal, a 16 or 17. How long will these gains and losses last?

Lake Geneva is a sleepy but posh town between Madison and Chicago. It's built for relaxing, a place where those with money enough to enjoy local leisure travel can get away from it all. Traveling between Chicago and Madison today, I felt anxiety but no need for a Lake Geneva retreat. For that matter, we do not even need a good role-playing game for drama, given the way things are going. I cannot say I am surprised by the numbers, but I experienced that sinking feeling about this campaign starting to get really messy. Punches are definitely being thrown, lately mostly at Obama. How he responds is the question.

Obama has had a rough few days (partly because he simply didn't respond well to attacks), and in order to really present the new politics he is so good at advertising, he must win the nomination by making his case from here on out, and not just relying on delegate-math arguments. If he can stay communicating the philosophical argument, which is his strength, then other people will begin piling the pressure on the Clintons for him, including maybe some surprising people. And this new politics doesn't mean he is not allowed to attack, he just has to attack in a different way. If he can pull out that geek charm of his, and land a few counterpunches while making people smile or even laugh, he will get that Dungeon Master psyche-out thing going again. That lets him toss mud at Clinton and McCain without getting his hands dirty.

Whatever else you want to say about this nominating contest, it is fascinating.

In the great spirit of fun, to which Gygax devoted an amazingly fertile intellect, a jokey fan left a tribute to the man, pasted below, on a comments page linked from one of the obits I'd been reading. All you who played D&D in the eighth grade like I did will enjoy this.

You pass your Fort save!

You cast Exercise and Healthy Diet on Clogged Artery!

You failed your Fort save!