from franklin's vdc and copy center

Something we made and posted in Arawak City... 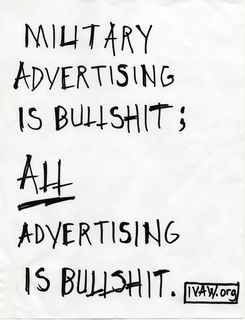 I've been in Arawak City, which is what the local radicals of Columbus, Ohio, call their town. Nice, I like that.

As part of the Red76 crew assembled for the week, we have been presenting work in a temporary inhabitation of a storefront space at 1124 N. High called Franklin's VDC and Copy Center. Yesterday we spent a good portion of the afternoon making and posting a lot of anti-recruiting flyers, led by our friend Aaron Hughes and the traveling group of vets from Iraq Veterans Against the War, Great Lakes chapter. Zefrey Throwell and Mike Wolf were here, adding to the snowballing of ideas and action. Mike will be keeping things going for about another five or six days. Check the Copy Center blog linked above for the day's upcoming events.

Anti-recruiting flyers aren't all that we made, of course. There are quite a few Free Art History flyers now up and available in the Copy Center, including ones about Leonora Carrington, Ed Sanders, and my own contribution–a graphic account of the art connection in the '89 social movement in Beijing.

I should also say, this show that the VDC is part of, Exact Imagination, now on exhibit at the Columbus College of Art & Design, is quite good. It is a smallish, very tightly presented overview of critical/collaborative work, beginning with some excellent examples of straight institutional critique work by Louise Lawler and Andrea Fraser. The now-classic text Art and Reality by N55 is presented as a large scale wall text, in lieu of an introductory interpretive text. The Red76 project is included as an example of site and space-specific, actively social, and overtly political work.

Coincidentally, while we've been in town, Hillary held a campaign rally at Ohio State University. Also, a group of rad student environmentalists occupied the President's office at OSU. Fun.

There is among the host of reasons Barack Obama, the insurgent candidate, is putting the hurt on Hillary Clinton the shift in generational tide. I think it is a pretty clear phenomenon, and is easily measured by the demographic stats. For example, after tonight's Potomac primaries CBS reports the following numbers:

Young people were extra motivated to vote this year, presumably by Obama. In 2004 17 - 29 year-olds made up only 8 percent of both Maryland's and Virginia's Democratic primary electorates. Today, however, they made up 14 percent of each state's electorate. Among these young voters Obama won handily. He beat Clinton by 50 points among Virginia's young voters, and by 39 points in Maryland.

I have also seen reports that document a considerable majority favoring Obama going all the way into the mid-30s age group. I would even guess that he holds an advantage well into the 40s. From what I can tell the generational division falls between the Baby Boomers and Generation X. Clinton is a baby boomer. Obama, by age and experience, falls very nearly on the leading edge of gen X. And for once, gen X has the upper hand, because finally what we have in Obama is a vehicle through which we can repudiate not simply boomer values (as evidenced in their similar policy positions), but rather more importantly, boomer dysfunction.

We can boil it down to this: the struggles of the boomer generation were fought over the challenges presented by the question 'What Is Right?' The question will always have metaphysical merit, but in a country allowing its racial minorities to suffer the bald-faced injustices of segregation and, at the same time, making war on a small, poor, faraway nation like Vietnam, the question took on political urgency. Having failed as a generation to settle the question, for the decades afterward 'What Is Right?' remained the defining metaphysical question underlying the national political debates and ideologies.

Perhaps until now. Voters ready to move on from the dramas of the baby boomers see Barack Obama inhabiting a different question: 'Who Are We?'

Like the earlier one, it is a metaphysical staple. But because those gen X and younger grew up into a reality of transience, multi-lingualism, economic precarity, media image saturation, immigration, electronic communication, multiculturalism, diaspora, and globalization, it gains in political urgency along a generational line. The question of unity must be raised and successfully negotiated as a first step towards actually dealing with the truly impressive portfolio of problems awaiting whoever is the next U.S. president. Creating unity begins with asking the question 'Who Are We?'

The freek culture of Madison turns out for functions regularly. I was in attendance at one such event recently, a performance by Hugh Masekela and the Chissa All-Stars (featuring the amazing vocalist Sibongile Khumalo–if you ever have a chance to see her perform, don't miss it). If I had to guess, I'd say that Madison is probably somewhere near fifteen percent freek, broadly defined. By contrast, in the big city of Chicago, I would say the freek element constitutes as little as less than one percent of the population.

Oh, what is a freek? A freek is a person who identifies with the oppositional subcultures of the nineteen Sixties, and in some way, obvious or subtle, expresses that identification socially. Starting from the Sixties the relevant social histories stretch both backwards (to the Beats, for example) and forwards (to the myriad politicized styles and subcultures of the Eighties). Self-defined (as opposed to the media-anointed term 'hippy') and nuanced (the double 'e' freek brings together freedom and difference as one thing), freek society is alive and healthy in Madison, as anyone who reads this blog would gather.

Well, it is alive, anyway. Is freek culture ever healthy? We hope so; and goddess knows, we try. (Oops; it's out–I am a freek...) But we all know, freeks can be some of the most messed up and lost people we've ever met. Freeks prove the point:  there may in fact exist some relationship between being fucked-up and being free. But, as my vox neighbor Chris Balz says, some of us believe that freeks, as fucked-up as they sometimes are, just might be the best hope for the planet. I know. Scary.