Still a little jet-lagged, but getting up in the middle of the Budapest night does give me a chance to blog.

I've been trying to process Monday's event at the Depot. The format was somewhat flawed from the beginning. There were three of us: me as presenter, and then Edelbert Koeb, director of MUMOK, and Peter Pakesch, from the Kunsthaus Graz, as respondents. My dear friend Beatrix Zobl was charged with the thankless task of moderating. I was given only 25 minutes to make a case for a different curatorial treatment of new art from China than has become standard on the Euro-American museum circuit in the last ten years or so. What I chose to focus on was the significance of the '89 social movement centered in Beijing, the role of art in the lead up to it, and how the shadow of that event (the mass demonstration phase of which, of course, ended with the martial crackdown in Tiananmen Square) colors the post-89 period, including in China's world of contemporary art, and how 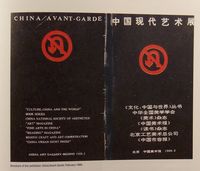 china/avant-garde '89
the analysis of this movement is typically only served a superficial treatment in most big survey shows. It was difficult to make my points (although Sarah keeps saying I need to stop beating around the bush) in the allotted time, given that the audience on balance had only a simple knowledge of Chinese history (if at all), not to mention the '89 social movement in particular. And it was basically impossible to directly address the big China–Facing Reality show up at MUMOK in its details, as I had only seen the show that morning. By mid afternoon I was napping, which always results from the combination of jet lag and boring art.

So the stage was set. But there were positives as the event got underway. For one thing, the audience was big. The room was filled to capacity, SRO. Probably fifty people in a space the size of Mess Hall. And everybody seemed engaged as I went through my thing, which I ended more or less on time.

And then, disaster. Pakesch proved to be a mumbler, and a long-winded one at that. His points were not in anyway germane to anything that I had said only moments before, and were mostly general observations about the 'transition' taking place in China nowadays. Which is precisely the ideological trope Wang Hui demolishes in his critiques of the post-'89 period, and which I strongly echoed in my presentation.

Koeb wasn't much better. Despite the announced event language, he chose to speak in German, against the protests and irritation of the organizers, and especially to the everlasting chagrin of Beatrix, who tried to right the ship several times but was basically ignored. (I was not so irritated; after all, we were in Vienna.) But it didn't even matter because his comments, as well as I could understand them through translated segments and my own elementary German, were about as relevant as Pakesch's. He basically told stories of how he put the China–Facing Reality show together, and what he had intended to do, and how he had some problems managing the artists. He admitted to deficiencies in the show, but offered almost no analysis on why that happened to be the case, and zero evidence of self-awareness as a Western curator trying to work in a cultural world about which he knows nothing. It never seemed to occur to him that the artists in China, as well as his Chinese co-curator, might be playing him like a song, even though he readily admitted that he could never seem to escape the same circle of the same artists who are already internationally known.

The discussion part was better, partly because the drone of the two respondents finally ended. But it wasn't really their styles that bothered me. It was the fact that they didn't actually respond to what I said. Knowing what I know now–that they are basically cultural functionaries, having been appointed to their positions by the government–I am not really surprised. But at the time, I could only wonder, did these guys even listen? If not, then why did they even bother to take part?

But of course, the main thing was having an opportunity to communicate with an audience outside of the mediation of big institutions, to see the Depot, and re-connecting with Martina Reuter, who works as the Depot's manager, as well as with the great WochenKlausur. All of that was terrific, and, in the end, counts as the real work.