the riff raff, and organic china

Not long after we first moved to Madison one of my new neighbors, without prompting, assured me that our neighborhood had 'basically, zero crime.' I'm not so sure. The other night I came home from Viroqua late only to discover vandalism, theft, and a party going on, right in our backyard. They smashed our birdfeeder, and then had the nerve to dance on the tables. 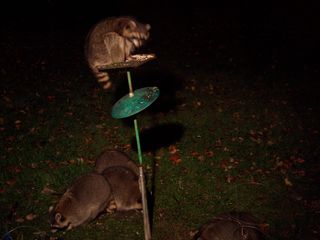 But what was I doing in Viroqua, that is the more interesting story. Well, first and foremost, hanging out with my pal Mike Koppa, but that is not the interesting part. The reason for driving out on that particular day was to listen in on the CEO and the inner circle of CROPP talk about their recent trip to China. CROPP is the farmers' co-op that produces among other things the organic products marketed under the brand Organic Valley, and represents a big employer of alt-minded people in southwest Wisconsin. So these folks went to China for a little vacation and a little research. Their findings were fascinating. They spent some time visiting a large co-operative in Jilin province, in the far northeast of China, which produced organic feed, mainly for export. Because it fed an export market, the standards were fairly stringent (that is, by Chinese standards). They also spent time in Hainan, an island off the southern coast way on the other side of the country, looking at traditional small-scall ag, which was in some particular ways better than organic, that is to say, close to sustainable. And, as a contrasting experience, they also saw, smelled, tasted, and breathed some of the China's frighteningly bad pollution, as all visitors must. None of the visitors had ever been to China, so their cultural experiences were worth noting, too.

I don't know if these folks intend to move forward with any sort of relationship building in China, but they were (as most interested Americans going for the first time) bitten by the China bug. I wonder if I can find a way to encourage it.

sunday shopping (for some color)

I think we are the only people in Madison who, on the same shopping trip, go to both Willy Street Co-op and Woodman's supermarket.

Willy Street is one of those places that began in the heyday of the co-op movement and managed to change with the times. Which is to say, it is a fine example of professionalized hippiedom. Woodman's, on the other hand, is all about what ordinary people actually eat, and that includes quite a few of the products carried by Willy Street, but whole universes besides. Willy Street is basically a comprehensive selection of the kind of products which at Woodman's occupy specialty sections.

We go to Willy Street mainly for their excellent bulk products, and, if we feel like it, to get some of their lovely organic produce. We go to Woodman's for the collards, smoked turkey legs, and boxes of frozen shrimp. And, to feel like we're shopping with the rest of humanity, not just the chosen folk of the Willy Street co-op (who are, of course, different from the Beautiful Folk of the Whole Foods).

This is perhaps all another way of saying we feel more comfortable socially at Woodman's, even if we can appreciate the quality of Willy Street's products and believe in the co-op mission. It's not that we feel uncomfortable at Willy Street, it's more that we find the atmosphere there irritating and exclusive, even as we belong to it. It would all be fine, were there are no pretenses about being diverse and inclusive. And that is one source of my irritation. For example, the last item on Willy Street's FAQ page is about Cheerios. Specifically, the question is, Why does the Co-op sell Cheerios and conventionally-grown produce? Their response:

Answer: The Co-op's first three goals, as listed in our bylaws, are:

We exist to serve our members—all 14,000+ of them. Mostly, members want to buy natural and organic foods at the Co-op; but we also serve the neighborhood and want to attract new members from this diverse area. If people can find products they are used to and feel they can afford to buy them at our store, they are more likely to feel welcome.

So, carrying Cheerios allows Willy Street to say that the Co-op is making an effort toward serving a diverse customer base. But they know that they'll only ever be so inclusive. After all, their selection of conventionally-grown produce never includes collard greens--a staple in the mainstream black culture. Collards are strictly a boutique veggie at the Co-op. And Cheerios as the most ethically-challenging product a store is willing to carry? You gotta be kidding me. I guess the Hostess Mini-Muffins, the Red Baron four-meat frozen pizza, and the ten-pound buckets of frozen chitterlings (both in full supply at Woodman's) didn't make the agenda. At Woodman's, we feel like we belong, and everybody else belongs, too. At Willy Street, we feel like we belong, but that lots of other people don't. I'm the guy who shops at Willy Street while scowling. Everybody else there seems to be smiling.

Best product at Willy Street: mixed cubed fish from the seafood counter. Large pieces cut from their filets, some salmon, some halibut, etc. Good for seafood pastas and stews. Best products at Woodman's: the excellent line of dried Mexican chiles. And, yes, the big bunches of collards for 89 cents/lb.

news from the 'hood, and lucky dube

Tonight at the Hyde Park Art Center I ran into a friend of mine who lives in the neighborhood. We had not seen each other in a couple months. Her news was mostly negative. The low point was a two-day stretch in which her locked office was burglarized in broad daylight and then a shooting occurred in her apartment building. That kind of city stress, I really do not miss.

On the other hand, the blandness of Madison's West Side makes me long for life's rough edges. There is something about the quiet of Madison that feels to me like we're evading the world's problems by living there. I say that, knowing full well from personal experience that being violated through crime sucks bad. In the city, I always felt that exercising one's tolerance for a whole range of social dysfunction was almost a kind of atonement, at least for those who belong to the privileged classes, who have a choice of where to live. Is there any sense to that idea, or is it just a guilt-induced notion? Probably the latter, but then again, some currents of liberation theology hold that the poor and wretched are closer to God, precisely because of their having experienced the complex of intimate sufferings that come with economic deprivation. But the suffering, that's the part of Christianity I could never really get with. Well, that and the Resurrection. So is it a 'grass is greener' mentality? Maybe.

That reminds me, I wanted to put on the record my tribute to Lucky Dube. The tragedy of violence, the property crime-turned-murder, will never be more sadly recalled than in the recounting of this great artist's demise. The world needed Lucky Dube. His voice gave me and millions of others pleasure and inspiration. The press, especially of the African continent, has been full of tributes, like this one. No, nothing good comes of violence.

I played one of his songs at the Patho-Selections event at the Art Center back in July. Listen here if you don't mind me blabbing....

I've been following some of the reports about the state of emergency called by Musharraf in Pakistan. The Bush administration has been watched closely for a negative response. So far, nothing more than some words of disapproval, which is to be expected. Almost all the mainstream news stories I've read have made it a point to say that Bush has not threatened sanctions or a cutoff in American aid. My question is, how can the American press (or people, especially liberals) expect any such thing when the US did absolutely nothing after Pakistani scientists were caught selling nuclear tech info, to, including, of all nations, Libya and Iran??? It was that episode which announced to all the world that Bush is in bed with Musharraf for good. This article from Forbes tells us the rest of the story, which is really all we need to know: business is not worried. The attitude of the American political class is, if business is not worried, why should the rest of the world be?